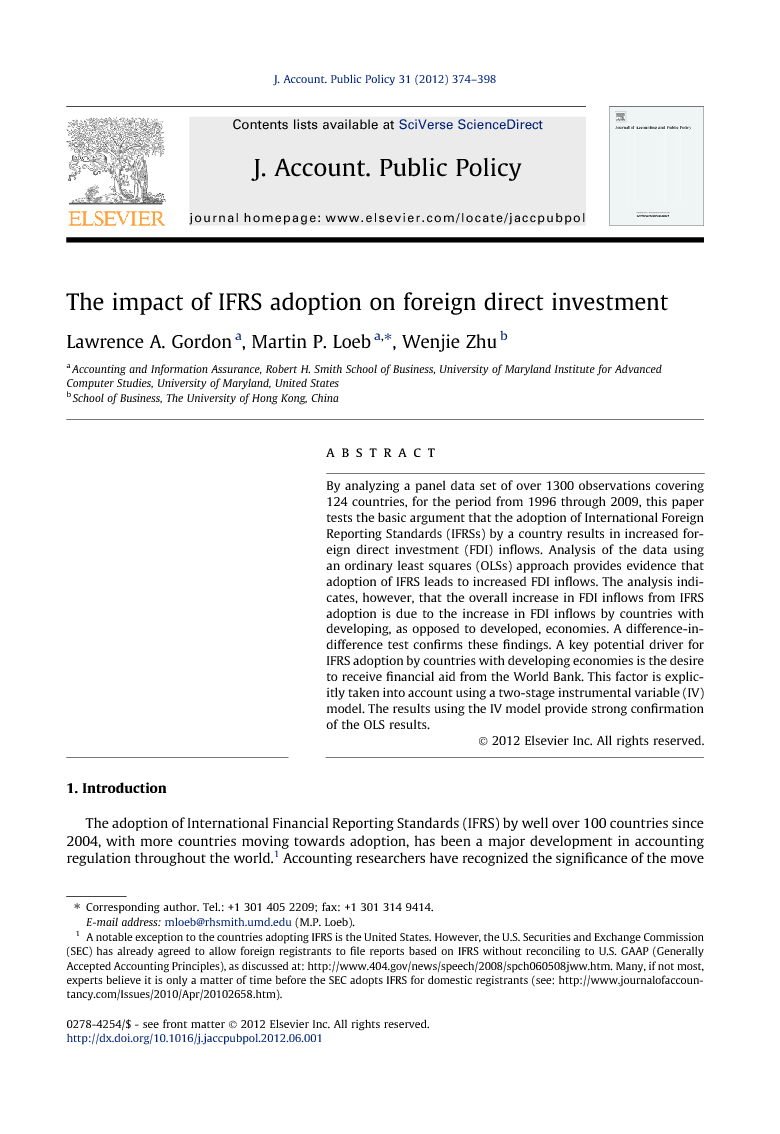 By analyzing a panel data set of over 1300 observations covering 124 countries, for the period from 1996 through 2009, this paper tests the basic argument that the adoption of International Foreign Reporting Standards (IFRSs) by a country results in increased foreign direct investment (FDI) inflows. Analysis of the data using an ordinary least squares (OLSs) approach provides evidence that adoption of IFRS leads to increased FDI inflows. The analysis indicates, however, that the overall increase in FDI inflows from IFRS adoption is due to the increase in FDI inflows by countries with developing, as opposed to developed, economies. A difference-in-difference test confirms these findings. A key potential driver for IFRS adoption by countries with developing economies is the desire to receive financial aid from the World Bank. This factor is explicitly taken into account using a two-stage instrumental variable (IV) model. The results using the IV model provide strong confirmation of the OLS results.

The adoption of International Financial Reporting Standards (IFRS) by well over 100 countries since 2004, with more countries moving towards adoption, has been a major development in accounting regulation throughout the world.1 Accounting researchers have recognized the significance of the move to a set of harmonized global accounting standards and have analyzed a number of issues concerned with the economic effects of adopting IFRS (e.g., Aharony et al., 2010, Armstrong et al., 2010, Bhimani, 2008 and Daske et al., 2008).2 Indeed, there is a growing consensus that harmonization of accounting standards carries with it the potential to increase transparency, thus reducing information processing costs and asymmetric information (e.g., Humphrey et al., 2009 and Shima and Gordon, 2011). As Shima and Gordon (2011, p. 481) note, “The recent global trend toward the use of IFRS may signal attempts by policy makers to reduce information asymmetries for international investors.” To the extent that IFRS adoption by a country leads to an increase in the transparency of financial reports, IFRS adoption should also lead businesses and individuals in other countries to be more likely to invest in that country. Countries where the transparency of financial reports is poor, relative to the transparency provided under IFRS, have the greatest potential for increasing transparency through IFRS adoption. In general, countries with developing economies have weaker domestic financial reporting regulations, with less transparency in their financial reports, than countries with developed economies (Ding et al., 2007). Thus, it is the former countries (i.e., those with developing economies, or what are often called emerging markets) that should have the greatest potential for an increase in foreign investment as a result of IFRS adoption. The Chairman and CEO of Ernst & Young clearly recognized the potential impact of global IFRS adoption on international investment decisions for countries with developing economies, when, in an Op Ed article in the Wall Street Journal, he noted, “There would also be benefits for emerging markets and the poorest countries of the world. A globally embraced set of standards can provide a readily available foundation for capital market activity. This could promote investment, strengthen the economy and improve people’s lives (Turley, 2007, p. 18).” To the extent that Turley’s argument is correct, policy setters in countries with developing economies would be wise to consider requiring the mandatory adoption of IFRS for firms in their countries. To investigate the effect of IFRS adoption on the magnitude of foreign investment into a country, we examine the country’s total foreign direct investment (FDI) inflows. FDI inflows are a measure of foreign investors’ direct investments into a host country that represent lasting or controlling interests in businesses in the host country. FDI inflows are generally considered to be a major driver of economic development for a country, especially for countries classified as having developing economies (OECD, 2002). FDI has been, and continues to be, a fundamental concern to economic and international researchers, as well as policymakers. An important aspect of this concern has focused on assessing the determinants (or key drivers) underlying FDI. The literature investigating FDI determinants is extensive and goes back long before IFRS reached the agenda of the International Accounting Standards Board (the body that issues IFRS and is the successor of the International Accounting Standards Committee) in 2001.3 The study reported in this paper has two major, albeit related, objectives and contributes to both the literature on the economic consequences of IFRS adoption and the empirical literature on the determinants of FDI. The first objective is to examine the impact of adopting IFRS on total FDI inflows of all countries making such an adoption. The second objective is to determine if the impact of IFRS adoption on county-specific FDI inflows varies based on whether a country is classified as having a developing or developed economy. As discussed in the next section of the paper, to date there has been limited research examining the above issues. The key findings from the current study support the argument that IFRS adoption is positively associated with an increase in the total FDI inflows to countries. However, while the impact of IFRS on the FDI inflows is statistically significant for the overall sample, this result is driven by the subsample of countries classified as having developed (as opposed to developing) economies, according to the World Bank classification scheme.4 As discussed in the fifth section of this paper, these findings have important implications for researchers and policy setters. The remainder of this paper will proceed as follows. In the second section of the paper, we develop the two hypotheses underlying our empirical study. In developing the hypotheses, we provide a brief review of the relevant literature. In the third section, we discuss the research design and sample used for testing the two hypotheses. As discussed in that section, the design of the study employs ordinary least squares (OLS) regression models, a difference-in-difference analysis, and a two-stage instrumental variable (IV) model. We present the findings from the current study in the fourth section of the paper. In the fifth section of the paper, some overall implications of the findings from the current study are presented. Concluding comments regarding the current study’s findings, limitations, and suggestions for potential future research are provided in the sixth and final section of the paper.

The major objectives of this paper have been to assess the impact of adopting IFRS on the overall country FDI inflows and to determine if this impact varies based on whether a country is classified as having a developing or developed economy. Based on an empirical study, we find support for the argument that the overall FDI inflows are positively associated with a country’s decision to adopt IFRS. However, as anticipated, this support is statistically significant for those countries classified as developing economies, but not for countries classified as developed economies. As discussed in the previous section of this paper, these findings have important implications for researchers and policymakers interested in accounting, international business, and economic development. As with all empirical studies, the current study has limitations. The two most obvious of these limitations are as follows. First, assessing the incremental impact of adopting IFRS on the FDI inflows of countries is constrained by the fact that a comprehensive theoretical model for predicting the FDI inflows of countries does not exist. Nevertheless, there is a large body of empirically based literature that examines the determinants of FDI inflows and our study was able to utilize this literature as a benchmark for considering the incremental impact of IFRS on FDI inflows. The second limitation of the current study surrounds the fact that the data available regarding a country’s decision to adopt IFRS is incomplete. That is, country IFRS adoption does not tell us the extent to which firms within that country are actually complying with all of the principles associated with IFRS. Thus, an underlying assumption of the current study is that firms within a country required to adopt IFRS (by its SEC [Securities and Exchange Commission] equivalent or some other official government body), will, in general, follow the rules specified by IFRS. This assumption seems to be realistic, especially in connection with the firms that tend to be associated with FDI inflows. The above limitations notwithstanding, we believe the findings from the current study help to shed light on the complex relation between a country’s accounting standards and its overall FDI inflows. The findings from the current study also shed light on the relation between the accounting standards used by a country classified as a developing economy and that country’s ability to attract loans from international organizations like the World Bank. Of course, the findings from the current study are best viewed as suggestive rather than definitive. As countries gain more experience with the use of IFRS, a clearer picture of the relation between a country’s decision to adopt IFRS and its overall FDI inflows, as well as the relation between adopting IFRS and attracting loans from international organizations, will be possible. Thus, we hope that other researchers will conduct studies that replicate, as well as extend, the line of research contained in the current study. In this latter regard, an interesting extension of the current study would be to examine the long-term effect of adopting IFRS on a country’s ability to move from a developing to a developed economy. Once the data becomes available, another interesting extension of the current study would be to consider the impact of the financial crisis of 2007–2011 on the relation between IFRS and FDI.