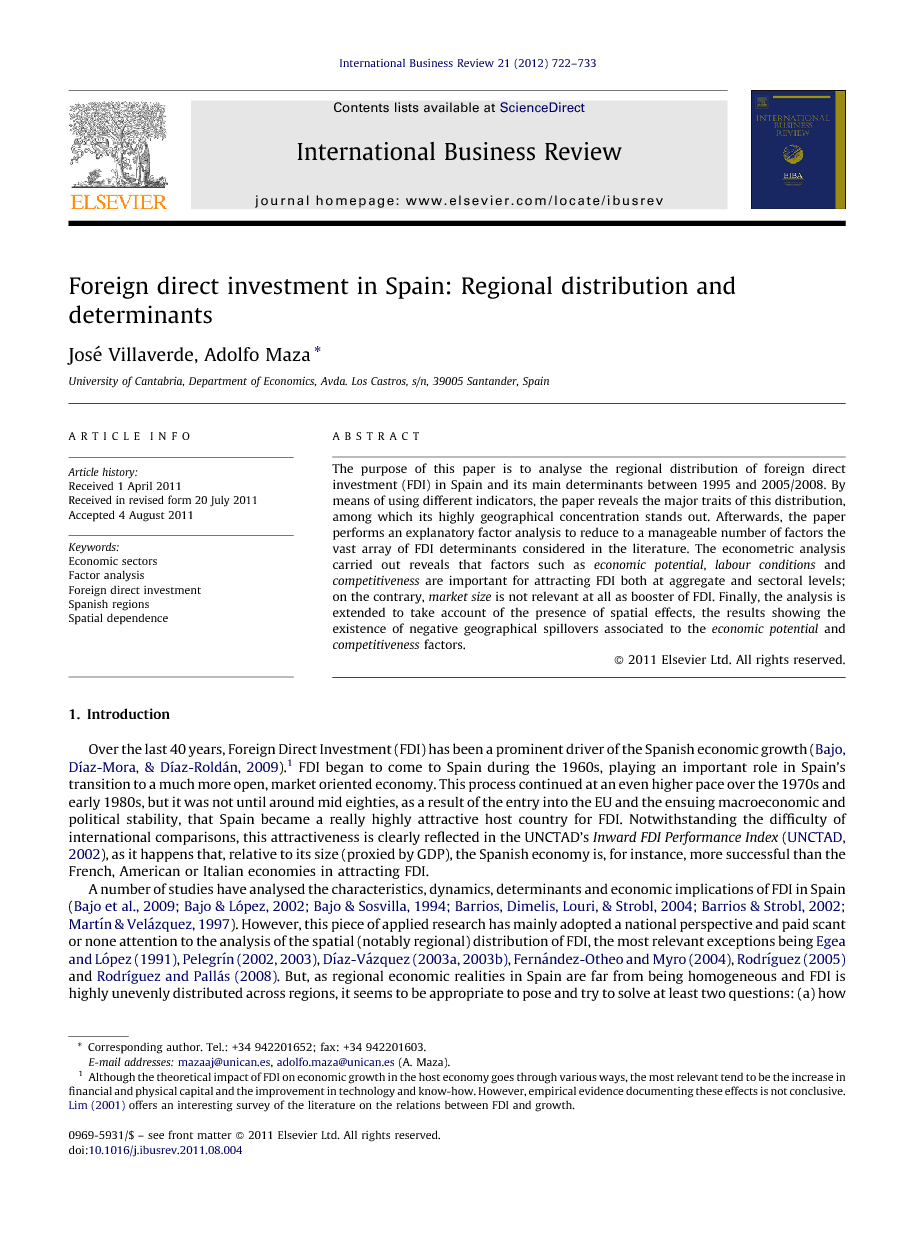 The purpose of this paper is to analyse the regional distribution of foreign direct investment (FDI) in Spain and its main determinants between 1995 and 2005/2008. By means of using different indicators, the paper reveals the major traits of this distribution, among which its highly geographical concentration stands out. Afterwards, the paper performs an explanatory factor analysis to reduce to a manageable number of factors the vast array of FDI determinants considered in the literature. The econometric analysis carried out reveals that factors such as economic potential, labour conditions and competitiveness are important for attracting FDI both at aggregate and sectoral levels; on the contrary, market size is not relevant at all as booster of FDI. Finally, the analysis is extended to take account of the presence of spatial effects, the results showing the existence of negative geographical spillovers associated to the economic potential and competitiveness factors.

Over the last 40 years, Foreign Direct Investment (FDI) has been a prominent driver of the Spanish economic growth (Bajo, Díaz-Mora, & Díaz-Roldán, 2009).1 FDI began to come to Spain during the 1960s, playing an important role in Spain's transition to a much more open, market oriented economy. This process continued at an even higher pace over the 1970s and early 1980s, but it was not until around mid eighties, as a result of the entry into the EU and the ensuing macroeconomic and political stability, that Spain became a really highly attractive host country for FDI. Notwithstanding the difficulty of international comparisons, this attractiveness is clearly reflected in the UNCTAD's Inward FDI Performance Index (UNCTAD, 2002), as it happens that, relative to its size (proxied by GDP), the Spanish economy is, for instance, more successful than the French, American or Italian economies in attracting FDI. A number of studies have analysed the characteristics, dynamics, determinants and economic implications of FDI in Spain (Bajo et al., 2009, Bajo and López, 2002, Bajo and Sosvilla, 1994, Barrios et al., 2004, Barrios and Strobl, 2002 and Martín and Velázquez, 1997). However, this piece of applied research has mainly adopted a national perspective and paid scant or none attention to the analysis of the spatial (notably regional) distribution of FDI, the most relevant exceptions being Egea and López (1991), Pelegrín, 2002 and Pelegrín, 2003, Díaz-Vázquez, 2003a and Díaz-Vázquez, 2003b, Fernández-Otheo and Myro (2004), Rodríguez (2005) and Rodríguez and Pallás (2008). But, as regional economic realities in Spain are far from being homogeneous and FDI is highly unevenly distributed across regions, it seems to be appropriate to pose and try to solve at least two questions: (a) how attractive are the Spanish regions to FDI? and (b) which are the main determinants of this attractiveness? More specifically, the paper attempts to contribute in four ways: first, and to get more insight about the regional distribution than in previous papers, it employs different indicators of inward FDI; secondly, it uses factor analysis to reduce the huge number of variables potentially explaining the regional distribution of FDI to just a few of them called factors; thirdly, the paper carries out estimates of an FDI equation not only at aggregate but also at sectoral level; and fourthly, it explores the existence of spatial spillovers in the attracting factors to assess whether regions compete or not for FDI. The remainder of the paper is organised as follows. In Section 2 a review of the regional distribution of FDI in Spain is developed. Afterwards, Section 3 offers a brief literature survey on intra-country FDI determinants, mainly with relation to the Spanish case. Drawing from this literature, Section 4 proceeds in two steps: first, it performs the aforementioned exploratory factor analysis, and second, it specifies the model employed, estimates it and presents the main results. Section 5 enlarges the previous model by including spatial lags of FDI attraction factors. Finally, some concluding remarks and policy implications are offered in Section 6.

Although inward FDI has increased tremendously in Spain in the last 30 years, large differences across regions tend to persist. This paper analysed inward FDI to Spanish regions from 1995 onwards in an attempt to offer new insights with relation to its distribution and determining factors. To address this issue, the paper resorted to different indicators concluding that: (1) FDI in Spain has been highly concentrated in just two regions, namely Madrid and, to a much lesser extent, Cataluña. (2) This being so, the FDI Potential Index showed that two other regions, Navarra and País Vasco, seemed to be even better positioned to receiving FDI than Madrid and Cataluña. (3) From a sectoral perspective, it has been shown that, although manufacturing (mainly medium technology intensity industries) and services (above all wholesale and retail trade, and communications) concentrated most of FDI, there were important regional differences as to the weight of these sectors (branches). The second part of the paper was committed to the study of the main determinants of FDI across the Spanish regions over the period 1995–2005. After briefly reviewing the literature, and being conscious about the large number of variables potentially affecting FDI, we performed an exploratory factor analysis to reduce that large number of independent variables in the FDI equation to a manageable one of extracted factors. According to the variables they include, these factors were labelled as economic potential, labour conditions, market size, and competitiveness. The estimation of an FDI equation using these four factors as independent variables conveyed some interesting messages: as expected, at the aggregate level economic potential, labour conditions and competitiveness are important for attracting FDI. In contrast, market size is not relevant at all, which seems to be somewhat inconsistent with theory but reasonable from an empirical perspective (see, for example, Cieslik, 2005), particularly if we consider that most FDI is export-driven. As for the main sectors and branches, the estimates tended to confirm these results but for three exceptions: economic potential becomes non-significant as FDI attraction factor for the manufacturing sector; the same occurs with labour conditions in services; finally, no one of the four extracted factors is significant for the wholesale and retail trade branch. Back to the aggregate level, it is also important to note that the inclusion of spatial lags as independent variables in the FDI equation pointed to the presence of negative geographical spillovers associated to the economic potential and competitiveness factors. Although the methodology of this paper is somewhat of a novelty this making difficult a direct comparison with the main results found in the literature, we believe it is pertinent. Focusing on the Spanish case, we find two main departures: on the one hand, in contrast with Pelegrín (2002) and Rodríguez and Pallás (2008) findings, our paper does not confirm the role of market size as a key determinant of FDI; on the other, unlike Pelegrín (2002), infrastructure, a component behind our competitiveness factor, has come out as a variable fostering FDI. With respect to results obtained for other countries, the main difference surfaces when spatial dependence is considered, as we found that spatial spillovers effects to neighbouring regions are negative, whereas Bobonis and Shatz (2007) and Hong et al. (2008) concluded they are positive for United States and China, respectively. Finally, it is also convenient to note that most papers (both for Spain and other countries) conclude that agglomeration is a key factor in explaining FDI location. This paper did not address this issue explicitly, but it did it in an indirect way as some of the variables that are usually considered as proxies for agglomeration (infrastructures, GDP and per capita GDP) were embedded in our four factors. This being so, the role of agglomeration in our paper is somewhat contrasting with what has been found in the literature as we obtained that both infrastructures (included in the competitiveness factor) and per capita GDP (economic potential) positively affect FDI while GDP (market size) is non-significant. To conclude with, and under the assumption that FDI enhances economic growth, the findings in this paper have important policy implications, these mainly pointing out to the promotion of regional economic potential and competitiveness factors. Given the loading of each variable in these two factors, we think that national and regional tailored policies aiming at increasing public and private technological capital, human capital, R&D investments, strategic roads infrastructure projects and trade openness may be some of the most efficient ways for a region to attract FDI. Finally, although labour conditions also emerge as an FDI booster factor and the need of a more ambitious labour reform in Spain is quite evident (Maza & Villaverde, 2009), we consider that, in case this happens, is rather unlikely that it could have a significant impact on the regional distribution of FDI.