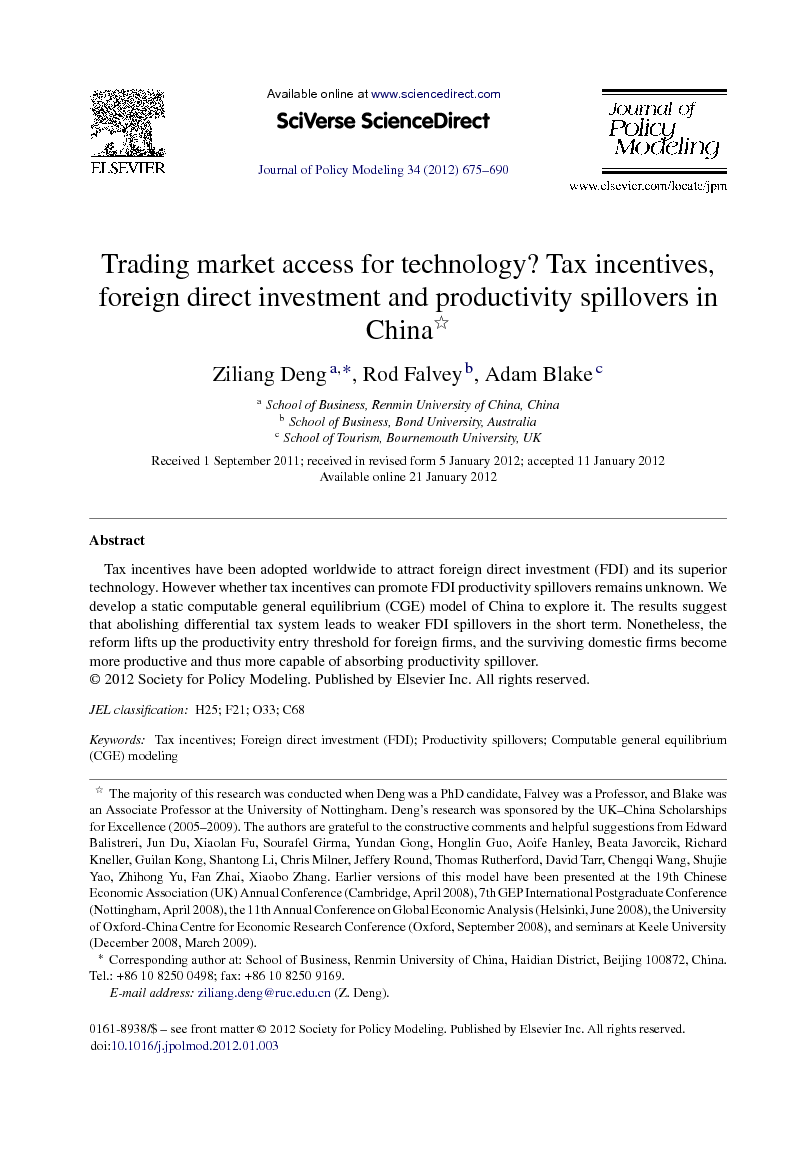 Tax incentives have been adopted worldwide to attract foreign direct investment (FDI) and its superior technology. However whether tax incentives can promote FDI productivity spillovers remains unknown. We develop a static computable general equilibrium (CGE) model of China to explore it. The results suggest that abolishing differential tax system leads to weaker FDI spillovers in the short term. Nonetheless, the reform lifts up the productivity entry threshold for foreign firms, and the surviving domestic firms become more productive and thus more capable of absorbing productivity spillover.

Corporate tax incentive has been a policy instrument widely adopted by many countries to attract foreign direct investment (FDI), as FDI may arguably enhance productivity and economic growth in host countries. In a global survey covering 40 developing and transition economies and 5 developed economies from all regions of the world (with North America excluded), almost 85 per cent of the countries surveyed offer tax holidays or statutory corporate tax reductions for specific types of foreign investment (United Nations Conference on Trade and Development, 2000). Tax competition over statutory profit tax rates for mobile profit has also been widely existing among the OECD countries in the last twenty years (Devereux, Lockwood, & Redoano, 2008), and differential taxes are observed in the vast population of industrialized economies. Devereux, Griffith, and Klemm (2002) find that the governments of the EU and G7 countries have been particularly keen to attract highly profitable investment projects carried out by multinational firms that may ‘generate positive externalities’ through technological spillovers (pp. 483–484). The widely observed FDI tax incentives in part reflect the desire of policy makers to benefit the host economies with foreign capital and its potential technology and productivity spillovers. However it has not been empirically scrutinized in the literature whether discriminative tax incentives can really promote the technology transfer and productivity spillovers in host countries. This research offers insights into this intriguing issue using a computable general equilibrium (CGE) model. Specifically, it assesses if harmonizing profit taxes over foreign and domestic firms has a negative impact over FDI productivity spillover effects. This research takes the Chinese economy as a case study and assesses the impact of the 2008 corporate income tax reform on FDI productivity spillover effects. A CGE framework under perfect competition is developed and further extended to incorporate two alternative market structures, namely monopolistic competition with homogeneous firms (Dixit & Stiglitz, 1977) and with heterogeneous firms (Melitz, 2003), so that we can not only cast a light on how the interplay between foreign and domestic firms affects the episodes, but also test the robustness of the results. Studying FDI spillovers under three market structures within a CGE framework is methodologically novel in the literature. More importantly it provides us a unique leverage, enabling us to look into this economy-wide phenomenon more comprehensively. We chose China as the case for study as its FDI incentives offer us an ideal sample. During the last three decades of ‘reform and opening-up’ policy implementation, China has become an attractive FDI destination because of its enormous labor supply and low labor cost, relatively stable political and economic environment, and pro-FDI policies (Deng, Guo, & Zheng, 2007). As a result, FDI inflows to China increased dramatically from 0.9 billion dollars in 1983 to 105.7 billion dollars in 2010. Since 1993, China has been the largest FDI host among the developing countries. The centerpiece of Chinese FDI policies was to attract foreign capital, promote export, accumulate foreign reserves, and very importantly, to enhance technology transfer and spillovers, that is, ‘trading market access for technology’ (Long, 2005). Most foreign-invested enterprises (FIEs)1 needed to pay profit tax at a de facto rate of only 15 per cent in the first seven years of operation. In contrast, the statutory corporate income tax rate of domestic firms was as high as 33 per cent. Although the benefits accompanying the influx of foreign capital have been enormous, some imperative problems related to the differential corporate taxes also emerged that include, among others, astonishing amount of fake FDI, crowding-out effect caused by FDI, vulnerability of domestic firms in services, weak international competitiveness of domestic firms, and the potential loss of fiscal revenue2. In 2008, the Chinese government abolished the preferential tax treatment which had been granted to FIEs for almost three decades. The impact of this reform over the FDI productivity spillover effects is assessed with CGE simulations in this research. The results suggest that the removal of the tax incentives hampers the FDI productivity spillovers in that it weakens the foreign presence, which is vital for FDI productivity spillovers. Nonetheless, if we take into consideration the dynamic pattern of firms’ productivity, the tax reform only temporarily lowers the FDI productivity spillover effects. The tax harmonization lifts up the productivity entry threshold for foreign firms, and the surviving domestic firms also become more productive and thus more capable of absorbing productivity spillovers after the market reshuffle. Therefore the tax harmonization can potentially promote the speed and magnitude of spillovers in a dynamic perspective. The remainder of this paper is organized as follows: the next section outlines the tax incentives employed to attract FDI in China, the costs and benefits of the differential corporate taxes. Section 3 provides an overview of the CGE model. Section 4 reports the economic effects of the 2008 corporate income tax harmonization. Section 5 concludes.

This research mainly simulates the impact of corporate income tax reform in 2008 on the FDI productivity spillover effect in China. This research addresses an important worldwide policy issue which has not yet been empirically assessed in the literature. To test the robustness of our results, we situate the analysis in three alternative market structures, namely perfect competition, monopolistic competition, and more recently modeled firm heterogeneity. Methodologically this is the first in the literature to study the impact of the tax incentives on FDI spillovers using CGE modeling. Comparing results in three market structures enables us to acquire the following two insights. First of all, abolishing differential tax system leads to weaker FDI spillovers in the short term in that it restrains the foreign presence which is vital for FDI productivity spillovers. However such a tax harmonization reform increases the output level of domestic enterprises and promotes national welfare. Secondly, under firm heterogeneity, the spillover benefit of integrated reform is even more prominent, because the reform can lift up the average productivity of all existing enterprises, and raises the possibility of productivity spillovers and the absorptive capacity of domestic enterprises. The findings in this research are generally in line with those found in the broad literature. For example, the net productivity spillover effects of FDI can promote GDP, national output and welfare, which is analogous to those found by Van Meijl and Van Tongeren (1998) and Lejour, Rojas-Romagosa, and Verweij (2008). The tax reform experiments imply the ‘trading market access for technology’ strategy was successful in China. This is consistent with the stylized facts collected by Long (2005). However, as this research is methodologically novel and involves new research perspectives, some of its findings do not have comparable counterparts in the literature. As discussed, taking into consideration the changing pattern of productivity under firm heterogeneity, the tax reform will only temporarily lower the FDI productivity spillover effects, and it may promote the speed and magnitude of spillovers later. However to find out the exact nature of this long-term scenario, we will need to further extend this static model to be a dynamic one so that we could treat the accumulation and depreciation of foreign and domestic capital and their subsequent productivity spillover as a dynamic process. This would be an appealing direction worth future research.