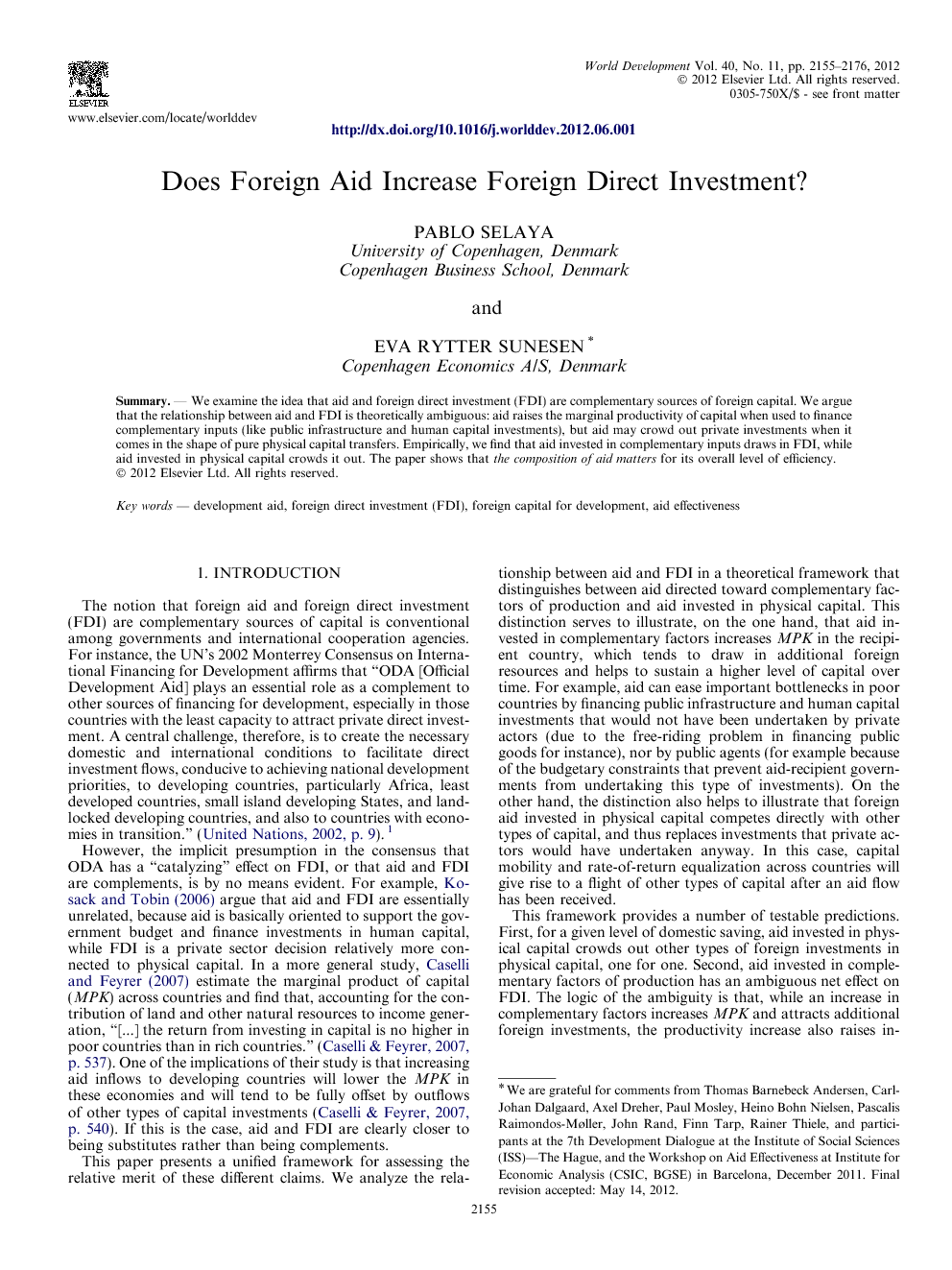 We examine the idea that aid and foreign direct investment (FDI) are complementary sources of foreign capital. We argue that the relationship between aid and FDI is theoretically ambiguous: aid raises the marginal productivity of capital when used to finance complementary inputs (like public infrastructure and human capital investments), but aid may crowd out private investments when it comes in the shape of pure physical capital transfers. Empirically, we find that aid invested in complementary inputs draws in FDI, while aid invested in physical capital crowds it out. The paper shows that the composition of aid matters for its overall level of efficiency.

The notion that foreign aid and foreign direct investment (FDI) are complementary sources of capital is conventional among governments and international cooperation agencies. For instance, the UN’s 2002 Monterrey Consensus on International Financing for Development affirms that “ODA [Official Development Aid] plays an essential role as a complement to other sources of financing for development, especially in those countries with the least capacity to attract private direct investment. A central challenge, therefore, is to create the necessary domestic and international conditions to facilitate direct investment flows, conducive to achieving national development priorities, to developing countries, particularly Africa, least developed countries, small island developing States, and landlocked developing countries, and also to countries with economies in transition.” (United Nations, 2002, p. 9).1 However, the implicit presumption in the consensus that ODA has a “catalyzing” effect on FDI, or that aid and FDI are complements, is by no means evident. For example, Kosack and Tobin (2006) argue that aid and FDI are essentially unrelated, because aid is basically oriented to support the government budget and finance investments in human capital, while FDI is a private sector decision relatively more connected to physical capital. In a more general study, Caselli and Feyrer (2007) estimate the marginal product of capital (MPK) across countries and find that, accounting for the contribution of land and other natural resources to income generation, “[...] the return from investing in capital is no higher in poor countries than in rich countries.” (Caselli & Feyrer, 2007, p. 537). One of the implications of their study is that increasing aid inflows to developing countries will lower the MPK in these economies and will tend to be fully offset by outflows of other types of capital investments (Caselli & Feyrer, 2007, p. 540). If this is the case, aid and FDI are clearly closer to being substitutes rather than being complements. This paper presents a unified framework for assessing the relative merit of these different claims. We analyze the relationship between aid and FDI in a theoretical framework that distinguishes between aid directed toward complementary factors of production and aid invested in physical capital. This distinction serves to illustrate, on the one hand, that aid invested in complementary factors increases MPK in the recipient country, which tends to draw in additional foreign resources and helps to sustain a higher level of capital over time. For example, aid can ease important bottlenecks in poor countries by financing public infrastructure and human capital investments that would not have been undertaken by private actors (due to the free-riding problem in financing public goods for instance), nor by public agents (for example because of the budgetary constraints that prevent aid-recipient governments from undertaking this type of investments). On the other hand, the distinction also helps to illustrate that foreign aid invested in physical capital competes directly with other types of capital, and thus replaces investments that private actors would have undertaken anyway. In this case, capital mobility and rate-of-return equalization across countries will give rise to a flight of other types of capital after an aid flow has been received. This framework provides a number of testable predictions. First, for a given level of domestic saving, aid invested in physical capital crowds out other types of foreign investments in physical capital, one for one. Second, aid invested in complementary factors of production has an ambiguous net effect on FDI. The logic of the ambiguity is that, while an increase in complementary factors increases MPK and attracts additional foreign investments, the productivity increase also raises income, domestic savings, and domestic investments, which tends to lower MPK and thus crowds out foreign investments. These two findings suggest that the overall impact of aid on FDI is in theory indeterminate, and that the composition of aid matters. We take the implications of our theoretical analysis to the data utilizing a panel of 99 countries over the period 1970–2001 for which we have disaggregated data. We find a large and positive effect of aid invested in complementary factors, while aid invested in physical capital has a negative impact on FDI. The combined impact of these two types of aid on FDI remains positive, so our results imply that more aid should be directed toward inputs complementary to physical capital to optimize the return on aid. The results are robust to (1) a broader definition of complementary aid than that adopted in the benchmark estimations, (2) allowing for imperfect capital mobility, and (3) controlling for traditional FDI correlates and regional fixed effects. The paper is structured as follows. Section 2 reviews the scarce theoretical and empirical literature on aid and FDI. Section 3 describes our theoretical framework. Section 4 presents our empirical strategy, describes the data and discusses relevant econometric. Section 5 shows the results, and Section 6 tests their robustness. Section 7 sums up and discusses policy implications.

Due to its potential to transfer knowledge and technology, create jobs, boost overall productivity, and enhance competitiveness and entrepreneurship, attracting FDI to developing countries is essential to contribute to economic growth, development, and poverty reduction.21 Given the emphasis on using ODA as a vehicle for creating a private sector enabling environment, the question of whether or not aid flows induce significantly more FDI inflows becomes an important and relevant question not only on its own right but also as an essential element in the aid effectiveness debate. Our results strongly support the hypotheses that aid invested in inputs complementary to physical capital draws in foreign capital, while aid directly invested in physical capital crowds out private foreign investments. While the impact of the two types of aid together is positive, an important policy implication is that the composition of foreign aid matters for its overall level of efficiency. This is particularly important for debates where the discussion tends to center on the amount of aid to be donated to poorest countries. Our analysis supports the recommendation of investing aid in complementary inputs. Such investments improve absorption capacity and increase MPK in the host countries, which allows them to accumulate more foreign capital without experiencing a drop in domestic private investments or a flight of foreign capital