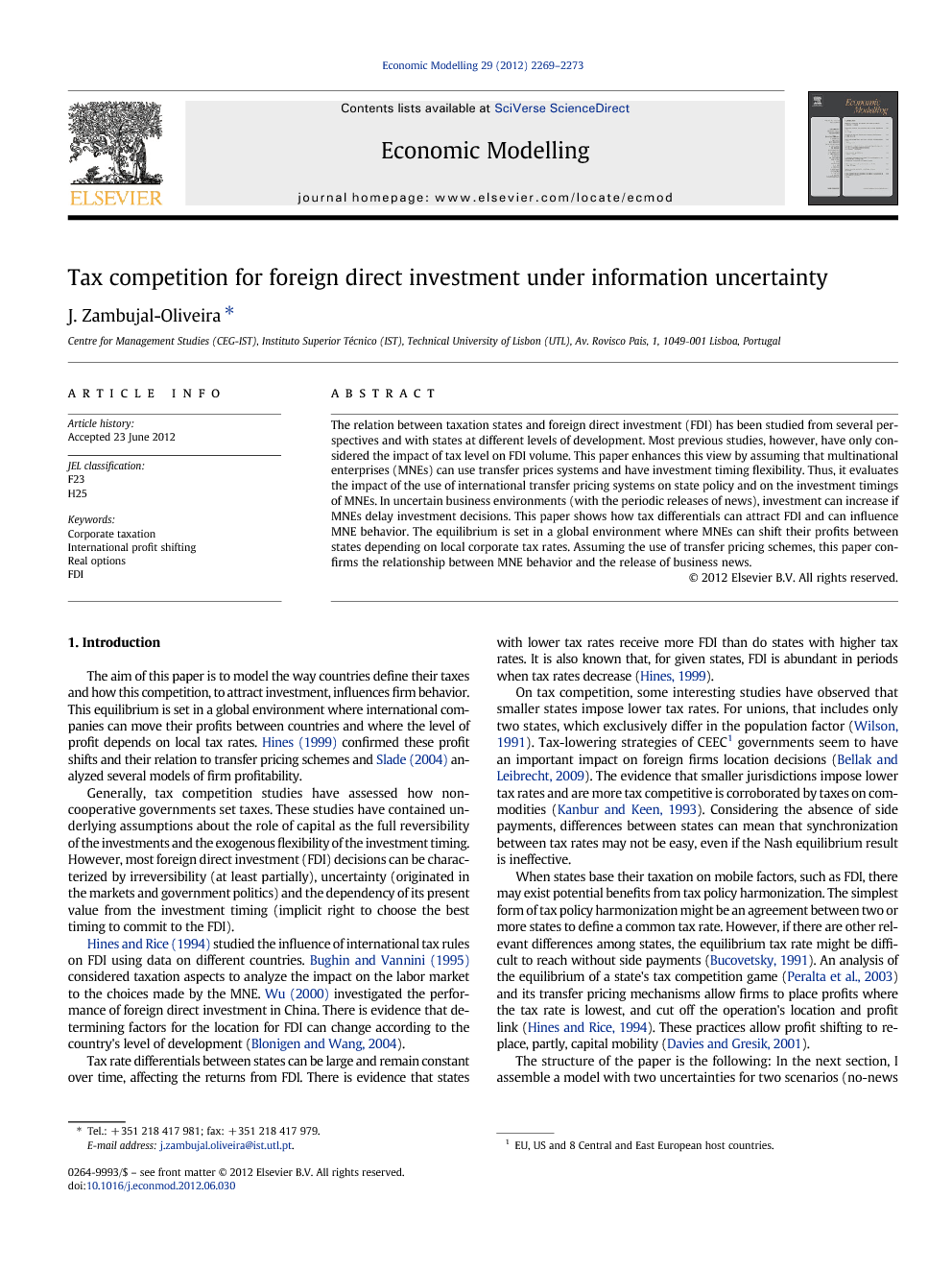 The relation between taxation states and foreign direct investment (FDI) has been studied from several perspectives and with states at different levels of development. Most previous studies, however, have only considered the impact of tax level on FDI volume. This paper enhances this view by assuming that multinational enterprises (MNEs) can use transfer prices systems and have investment timing flexibility. Thus, it evaluates the impact of the use of international transfer pricing systems on state policy and on the investment timings of MNEs. In uncertain business environments (with the periodic releases of news), investment can increase if MNEs delay investment decisions. This paper shows how tax differentials can attract FDI and can influence MNE behavior. The equilibrium is set in a global environment where MNEs can shift their profits between states depending on local corporate tax rates. Assuming the use of transfer pricing schemes, this paper confirms the relationship between MNE behavior and the release of business news.

The aim of this paper is to model the way countries define their taxes and how this competition, to attract investment, influences firm behavior. This equilibrium is set in a global environment where international companies can move their profits between countries and where the level of profit depends on local tax rates. Hines (1999) confirmed these profit shifts and their relation to transfer pricing schemes and Slade (2004) analyzed several models of firm profitability. Generally, tax competition studies have assessed how non-cooperative governments set taxes. These studies have contained underlying assumptions about the role of capital as the full reversibility of the investments and the exogenous flexibility of the investment timing. However, most foreign direct investment (FDI) decisions can be characterized by irreversibility (at least partially), uncertainty (originated in the markets and government politics) and the dependency of its present value from the investment timing (implicit right to choose the best timing to commit to the FDI). Hines and Rice (1994) studied the influence of international tax rules on FDI using data on different countries. Bughin and Vannini (1995) considered taxation aspects to analyze the impact on the labor market to the choices made by the MNE. Wu (2000) investigated the performance of foreign direct investment in China. There is evidence that determining factors for the location for FDI can change according to the country's level of development (Blonigen and Wang, 2004). Tax rate differentials between states can be large and remain constant over time, affecting the returns from FDI. There is evidence that states with lower tax rates receive more FDI than do states with higher tax rates. It is also known that, for given states, FDI is abundant in periods when tax rates decrease (Hines, 1999). On tax competition, some interesting studies have observed that smaller states impose lower tax rates. For unions, that includes only two states, which exclusively differ in the population factor (Wilson, 1991). Tax-lowering strategies of CEEC1 governments seem to have an important impact on foreign firms location decisions (Bellak and Leibrecht, 2009). The evidence that smaller jurisdictions impose lower tax rates and are more tax competitive is corroborated by taxes on commodities (Kanbur and Keen, 1993). Considering the absence of side payments, differences between states can mean that synchronization between tax rates may not be easy, even if the Nash equilibrium result is ineffective. When states base their taxation on mobile factors, such as FDI, there may exist potential benefits from tax policy harmonization. The simplest form of tax policy harmonization might be an agreement between two or more states to define a common tax rate. However, if there are other relevant differences among states, the equilibrium tax rate might be difficult to reach without side payments (Bucovetsky, 1991). An analysis of the equilibrium of a state's tax competition game (Peralta et al., 2003) and its transfer pricing mechanisms allow firms to place profits where the tax rate is lowest, and cut off the operation's location and profit link (Hines and Rice, 1994). These practices allow profit shifting to replace, partly, capital mobility (Davies and Gresik, 2001). The structure of the paper is the following: In the next section, I assemble a model with two uncertainties for two scenarios (no-news or news). Section 3 compares the investment levels of the two scenarios. In the last section, the paper states its findings.

This paper used the principle introduced by Bernanke (1983) to investigate how deferring FDI influences companies’ behavior. This principle states that the investment decision does not change by the appearance of good news. According to this principle, the probability and magnitude of bad news influence investment decisions. However, it influences profits and may reduce the value of the delay option. Relative to the goals defined in the Introduction, this paper can conclude that under Bernanke (1983)'s assumptions, tax influences FDI level. However, this effect is not homogeneous because investment boundaries behave differently in the no-news option compared with in the news option. In what concerns the assessment of tax competition between countries in a profitable environment, these can elevate the tax rate level and, consequently, increase the value of the option to delay FDI. The results taken from this paper demonstrate that the impact of profit transferring depends on the company's ability to defer investment. Facing the possibility of profit transferring and investing abroad, the company requires a higher payoff in the news scenario than it does in the no-news scenario. This paper confirms that to evaluate the influence of profit transfer on the threshold value, it is necessary to analyze the value of net profit shifted function. There is an inverse relation between tax savings and investment value. More tax savings means lower investment. Thus, profit shifting influences in a heterogeneous way investment trigger levels. The appearance of bad news has a relevant impact on the investment level of the news scenario but the appearance of good news is indifferent.