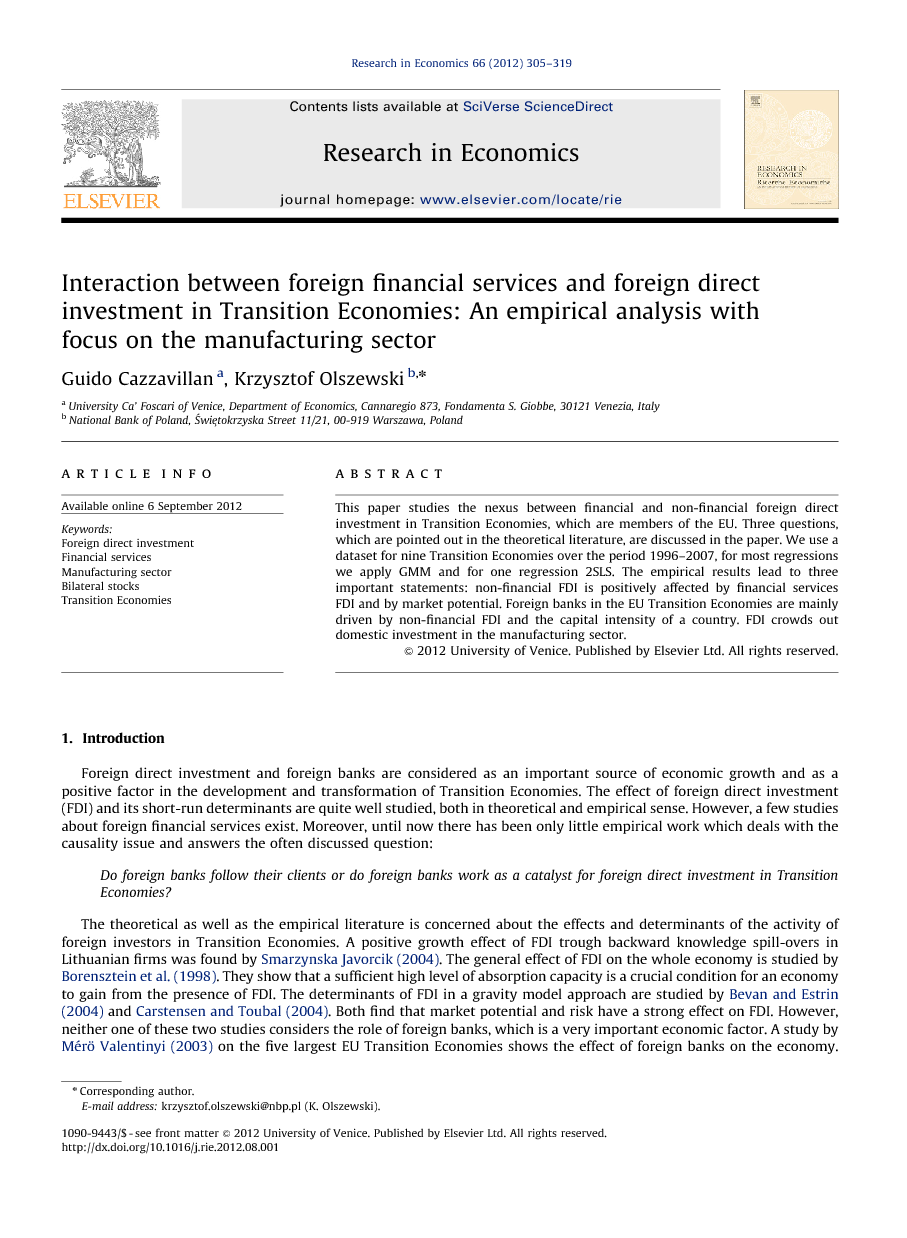 This paper studies the nexus between financial and non-financial foreign direct investment in Transition Economies, which are members of the EU. Three questions, which are pointed out in the theoretical literature, are discussed in the paper. We use a dataset for nine Transition Economies over the period 1996–2007, for most regressions we apply GMM and for one regression 2SLS. The empirical results lead to three important statements: non-financial FDI is positively affected by financial services FDI and by market potential. Foreign banks in the EU Transition Economies are mainly driven by non-financial FDI and the capital intensity of a country. FDI crowds out domestic investment in the manufacturing sector.

This paper investigates the causes and effects of foreign direct investment in the financial and non-financial sector in Transition Economies. The empirical results allow to make three important statements. Non-financial FDI is positively affected by financial services FDI. Foreign banks in the EU Transition Economies are mainly driven by non-financial FDI and the capital intensity of a country. FDI inflow crowds out domestic investment in the manufacturing sector. We tackle three important questions using one set of countries in approximately the same period of time. In the present literature those questions have been answered only partially and always in relation to different countries and very different time periods. Our study allows to draw a general conclusion. First and foremost, it is necessary to study the nexus between FDI, foreign financial services and domestic investment. Studies which look only at one direction of causality miss the mutual enforcement and the strong interaction between those very important economic variables. Secondly, it is important to apply a dynamic panel to capture the long-run relationship between the variables. GMM has to be applied whenever possible to tackle the endogeneity problem and the issue of hetersokedasticity and autocorrelation of the error term. The main results of the estimations are as follows. First, at macroeconomic level, non-financial FDI stock that origins from different donor countries follows strongly its past period realization. This is a sign that FDI constitutes a permanent capital stock and is well integrated in the host economy. The current value is positively affected by the market potential and also by foreign financial services which give financial stability. The risk of a macroeconomic crisis has a strong detrimental effect. Secondly, we show that financial services FDI is strongly affected by non-financial FDI. This confirms the follow-the-client hypothesis. However, domestic investment plays a significant role and is an important determinant of FSFDI, too. Inflation affects the stock of FSFDI negatively. Thirdly, we investigate the nexus in the manufacturing sector. Like at aggregate level, the stock of FDI in each industry depends on its previous realization. Moreover, foreign financial services and the value added have a strong positive effect. Domestic investment has no effect on FDI. The stock market capital has a negative effect, which might indicate that FDI prefer weak economies in which they can exploit their comparative advantage. Further on, we find that domestic investment does not depend on its past realization. It is a flow, and depends on the value added. FDI flows have a strong negative effect and crowd out domestic investment. Comparing our results with those from the recent literature we find that some results change drastically, conditional on the period and the sector of the economy that is considered. For example, recent studies at aggregate level show that foreign banks increase and stabilize the investment in the whole economy. However, in the manufacturing industries we do not find any effect of FSFDI on domestic investment. This shows that an economic variable can have different effects in different sectors of the economy and at different disaggregation levels. However, most of our results are in line with the empirical analysis presented in the literature. Our results should be interpreted with caution. The results apply to a period in which a high FDI inflow was observable. Nowadays, as the global financial crisis makes multinational corporations consolidate their capital in the home country, the effect might be very different. MNCs slow down their production or even stop it completely. Foreign banks withdraw funds and shift them to their home country. The economic impact of FDI might turn around. It was a major motor of economic growth, but due to the strong connection of the economies to the global economy it might have a detrimental effect during the next few years. This means that a new study which uses data since the middle of 2008 is necessary. However, we have to wait until the crisis is over and enough data is available to perform a new study. Moreover, the effect of FDI and foreign financial services on TFP and value added growth should be studied.