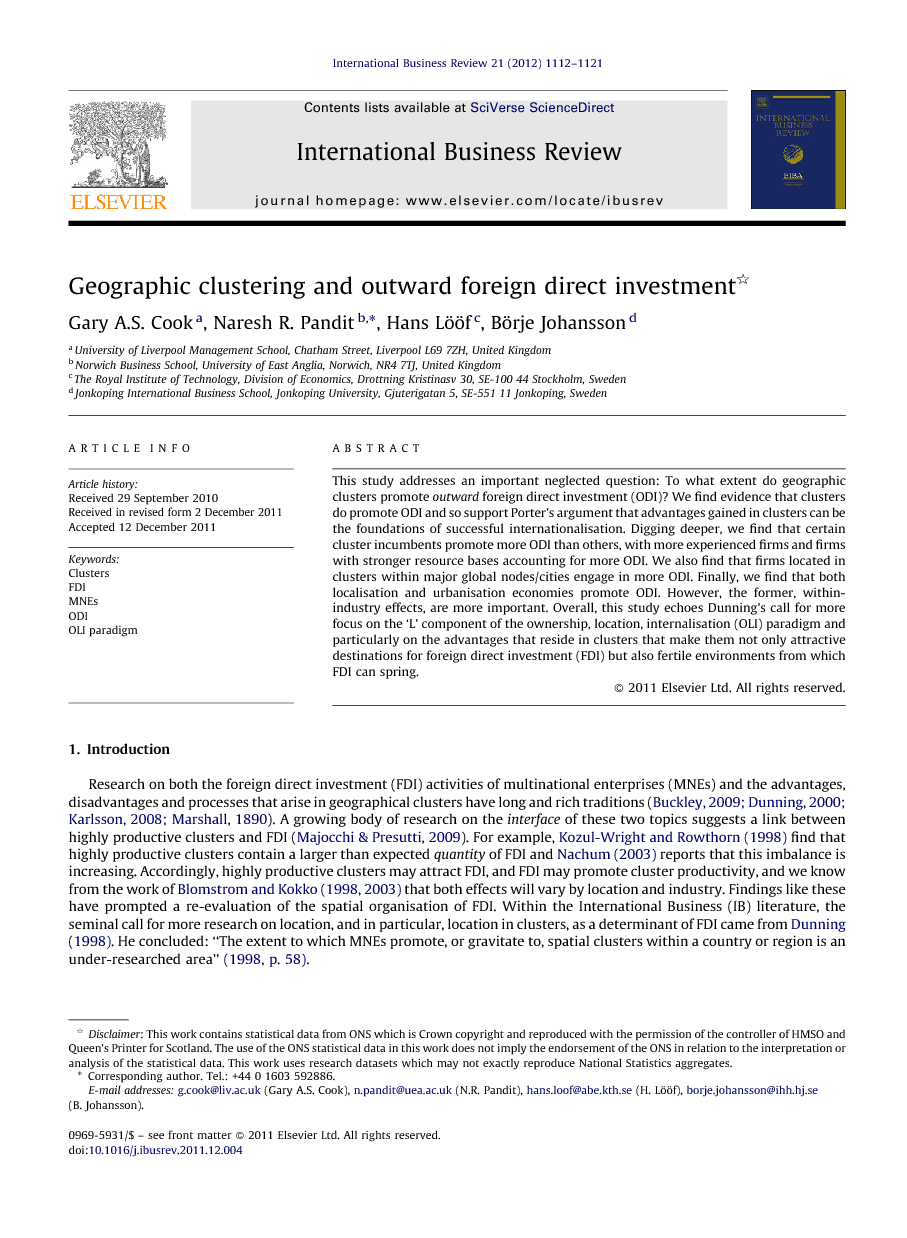 This study addresses an important neglected question: To what extent do geographic clusters promote outward foreign direct investment (ODI)? We find evidence that clusters do promote ODI and so support Porter's argument that advantages gained in clusters can be the foundations of successful internationalisation. Digging deeper, we find that certain cluster incumbents promote more ODI than others, with more experienced firms and firms with stronger resource bases accounting for more ODI. We also find that firms located in clusters within major global nodes/cities engage in more ODI. Finally, we find that both localisation and urbanisation economies promote ODI. However, the former, within-industry effects, are more important. Overall, this study echoes Dunning's call for more focus on the ‘L’ component of the ownership, location, internalisation (OLI) paradigm and particularly on the advantages that reside in clusters that make them not only attractive destinations for foreign direct investment (FDI) but also fertile environments from which FDI can spring.

Research on both the foreign direct investment (FDI) activities of multinational enterprises (MNEs) and the advantages, disadvantages and processes that arise in geographical clusters have long and rich traditions (Buckley, 2009, Dunning, 2000, Karlsson, 2008 and Marshall, 1890). A growing body of research on the interface of these two topics suggests a link between highly productive clusters and FDI (Majocchi & Presutti, 2009). For example, Kozul-Wright and Rowthorn (1998) find that highly productive clusters contain a larger than expected quantity of FDI and Nachum (2003) reports that this imbalance is increasing. Accordingly, highly productive clusters may attract FDI, and FDI may promote cluster productivity, and we know from the work of Blomstrom and Kokko, 1998 and Blomstrom and Kokko, 2003 that both effects will vary by location and industry. Findings like these have prompted a re-evaluation of the spatial organisation of FDI. Within the International Business (IB) literature, the seminal call for more research on location, and in particular, location in clusters, as a determinant of FDI came from Dunning (1998). He concluded: “The extent to which MNEs promote, or gravitate to, spatial clusters within a country or region is an under-researched area” (1998, p. 58). Following Dunning's call, the study of FDI into clusters (‘inward foreign direct investment’ or IDI), has gathered pace (Cook & Pandit, 2010). However, the study of the promotion of FDI from clusters (‘outward foreign direct investment’ or ODI) has been neglected. For example, two important recent surveys of MNEs and clustering focus exclusively on the location of foreign subsidiaries in clusters, paying no attention to a cluster's propensity to promote ODI ( Dunning and Lundan, 2008 and Rugman and Verbeke, 2009). This is surprising given that a central proposition of Porter (1990), which spurred much academic and policy interest in clusters, was that advantages gained in clusters can be the foundations of successful internationalisation. In order to address this gap in the literature, the central question investigated in this study is: To what extent do strong clusters promote ODI? A distinction that has long been made in the clusters literature is between two potential sources of cluster advantages (Hoover, 1948): urbanisation economies, which refer to the advantages of size and diversity within a general geographic concentration of economic activity (an agglomeration) (Jacobs, 1985) and localisation economies which refer to the advantages of size and diversity within the geographic concentration of a particular productive activity (Marshall, 1890). There is a debate regarding the relative importance of urbanisation and localisation economies ( Ciccone, 2002, Glaeser et al., 1992, Henderson et al., 1995 and Viladecans-Marsal, 2004) which has been neglected in the emerging IB literature on clusters and FDI. This is an important omission because it is localisation economies that the recent work on clusters and FDI focuses on, Porter (1990) being of this ilk, and so the implicit assumption is that localisation economies, not urbanisation economies, are the main source of cluster advantages. This assumption needs to be tested. If it is incorrect, implications, particularly those that are policy related, would need to be modified. Accordingly, this study's second-order research question is: With respect to ODI, what type of economies are more important, urbanisation economies or localisation economies? The paper is structured as follows. The next section reviews the literature that relates to the study's questions. The study's method is then stated leading to the presentation of the evidence which is discussed and evaluated. The final section concludes and draws implications for theory, practice, and policy and suggests avenues for further research.

Overall, this study finds strong and consistent evidence that clusters promote ODI and therefore it supports Porter's (1990) proposition that advantages gained in clusters can be the foundations of successful internationalisation. The generally positive coefficients on size and age also support the idea that cluster strength promotes ODI asymmetrically: it may be a tide which lifts all boats, but a small number are able to prosper more than the rest. In line with complementary thinking in IB (Peng, 2001) and strategic management (Barney, 1991) larger cluster incumbents with stronger resource bases are more likely to engage in ODI. This process of internationalisation itself may then strengthen the firm's ‘O’ advantages. Similarly, in line with the Stages Model, this study suggests that cluster incumbents engage in ODI incrementally over time, although the evidence here was weaker and this is in line with known problems of the Stages Model (Melin, 1992). The proposition that firms located in strong clusters within major global nodes/cities will engage in more ODI receives strong endorsement. Finally, there is evidence that both localisation and urbanisation economies are important. It is, however, the former, within-industry effects, which are more important. The IB literature needs to be more careful to distinguish between these two effects, which imply different processes whereby firms build capabilities and resource strengths. They also imply different prescriptions for policy makers interested in promoting clusters and/or innovation. The broader discourse within which the paper is situated is the regionalisation versus globalisation debate (Clark and Knowles, 2003 and Flores and Aguilera, 2007). One implication of the evidence presented in the paper is to reinforce the general point made by Rugman and Verbeke, 2004 and Rugman and Verbeke, 2007 that the geographic pattern of multinational activity is very unevenly spread. Rugman and Verbeke (2004), in common with much of the IB literature, also acknowledge the importance of the sub-national scale when considering where MNEs will choose to locate abroad. This study indicates the sub-national scale is also highly relevant in explaining the source of FDI. Key policy and practitioner implications flow. The importance of cluster advantages as an influence on multinational activity is supportive of the idea of cluster promotion in policy circles. Policy thinking has been strongly influenced by the idea of flexible specialisation where clusters are composed of agile and highly-networked SMEs, exemplified by the Third Italy and Baden Wurttemberg. In this study, MNEs emerge as important hub firms which are central to the dynamism of regional clusters. Policy thinking should take this more explicitly into account. Our findings on localisation versus urbanisation economies suggest that policy-making should favour the cluster over the agglomeration as the unit of analysis. For practitioners there are two main implications. Firstly, access to cluster advantages is an important aspect of the location decision, although realising potential advantages is not automatic and requires competence and effort. Secondly, the problems of congestion in major clusters, hinted at in the results, mean a critical view needs to be taken of which activities are best placed or retained within a particular cluster. This study has limitations. It would be desirable to incorporate a wider range of controls for differences in regional characteristics, the regional fixed effects dummies being crude proxies for what may be multifarious sources of regional advantage or disadvantage. Also, the econometrics afford no insight into the strategic orientation of firms, nor how firms create and leverage advantages from locating within clusters: the empirical proxies for resource strength are limited. These weaknesses could be addressed by qualitative case-study research. Beyond complementary qualitative research, there are two clear directions for future research. In general, the evidence presented is consistent with the cluster providing substantial advantages to MNEs. However, the relative importance of cluster advantages and internal resource strengths on performance has only been touched upon and this provides one avenue for further research. Deeper understanding is also needed of how MNEs capitalise on advantages available in the cluster and then disseminate them throughout their global operations.