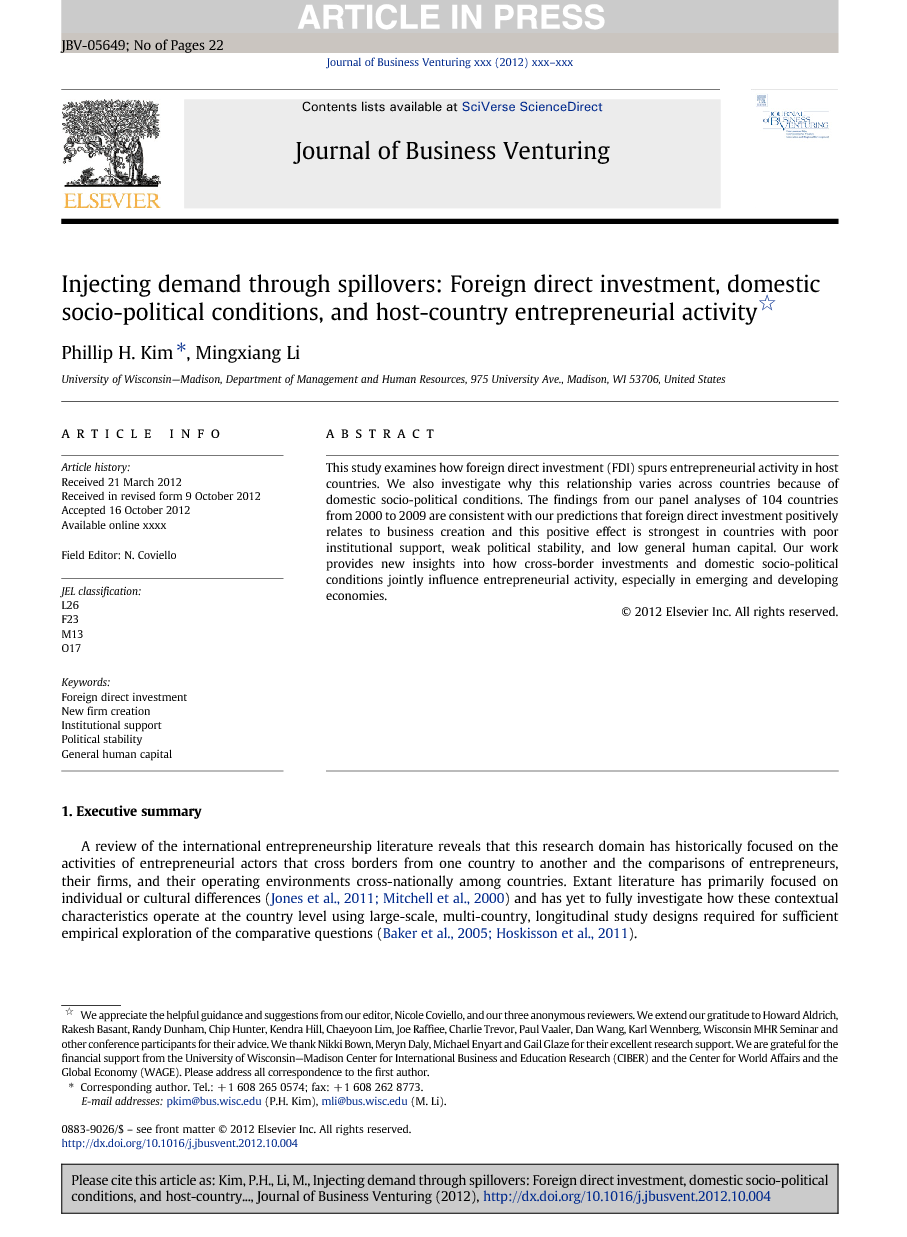 This study examines how foreign direct investment (FDI) spurs entrepreneurial activity in host countries. We also investigate why this relationship varies across countries because of domestic socio-political conditions. The findings from our panel analyses of 104 countries from 2000 to 2009 are consistent with our predictions that foreign direct investment positively relates to business creation and this positive effect is strongest in countries with poor institutional support, weak political stability, and low general human capital. Our work provides new insights into how cross-border investments and domestic socio-political conditions jointly influence entrepreneurial activity, especially in emerging and developing economies.

As the dawn of the 21st century recedes, once distant economies have become increasingly interdependent hubs of commerce. Many of these connections have been created through a dramatic rise in global foreign direct investment (FDI)—financial capital invested by foreign firms into host economies resulting in long-term ownership and significant management influence in their host-country affiliates (Bandelj, 2008 and Graham and Krugman, 1995). These trends call for a serious consideration of foreign investment's influence on economic outcomes in host countries. As such, this study sets out to explore the outcomes of FDI in host economies, particularly within the context of emerging economies, with their varying levels of institutional support, political stability, and general human capital. Specifically, we argue that the presence of foreign investment can act as a stimulus for entrepreneurial activity within the host country. Our focus on foreign direct investment expands a new research front regarding the study of international entrepreneurship (IE). A review of the IE literature reveals that this research domain has historically focused on both 1) the activities of entrepreneurial actors that cross borders from one country to another and 2) the comparisons of entrepreneurs, their firms, and their operating environments cross-nationally among countries (Coviello et al., 2011 and Oviatt and McDougall, 2005). With respect to cross-border activities, the thrust of the international entrepreneurship literature has been on theories of outward expansion of new and young firms into foreign markets (e.g., Jones et al., 2011, Kiss et al., 2012 and McDougall and Oviatt, 2000). Our first objective is to investigate whether inward foreign direct investment contributes to entrepreneurial activity within the host country. This reorientation is theoretically appealing because it emphasizes FDI both as a source of business opportunities and a channel for injecting new knowledge, skills, and practices through foreign subsidiaries operating in host countries. To advance the comparative, cross-national domain of international entrepreneurship research, we also investigate why inward foreign investment's influence on domestic entrepreneurial activity could vary across countries. This particular emphasis is theoretically attractive because it explicitly addresses the context-dependent nature of entrepreneurial activity ( Aldrich, 1979 and Stinchcombe, 1965). To investigate these boundary conditions, we develop a theory based on three country-level contextual characteristics–institutional support for private enterprise, political stability of governing policies, and general human capital achievement–drawn from macro-societal theories used in cross-national entrepreneurship research ( Bowen and De Clercq, 2008, Di Gregorio, 2005, Levie and Autio, 2011 and Stenholm et al., 2013). Scholars have argued for more research devoted to the sources of cross-national variations such as the ones we examine ( Kiss et al., 2012 and Welter, 2011). Extant IE literature has primarily focused on individual or cultural differences ( Jones et al., 2011 and Mitchell et al., 2000) and has yet to fully investigate how these contextual characteristics operate at the country level using large-scale, multi-country, longitudinal study designs required for sufficient empirical exploration of the comparative questions ( Baker et al., 2005 and Hoskisson et al., 2011). Thus, our secondary objective in examining country-level contextual characteristics is to open new theoretical ground distinct from prior cross-national IE research. We tested our theories using a 10-year panel of foreign direct investment and new firm registration levels for 104 countries between 2000 and 2009. This study design has three important implications. First, it enables us to systematically generalize our findings and highlight the context-dependent nature of the FDI main-effect relationship more precisely than has been done in previous studies (Welter, 2011). Second, this analytical design allows us to reconcile the contradictory conclusions reported by scholars using single-country designs in their respective analyses, unifying these differences in a single framework (Acs et al., 2007, Ayyagari and Kosová, 2010, De Backer and Sleuwaegen, 2003 and Görg and Strobl, 2002). Lastly, the design is also innovative in regard to the breadth of emerging and developing economies included in our sample; this feature–which has been lacking in prior cross-national entrepreneurship research (Bruton et al., 2008, Hoskisson et al., 2011 and Kiss et al., 2012)–allows us to make stronger inferences about the application of our study's findings to these regions of growing importance in the global economy. The evidence garnered from our study's unique design provides valuable new insights regarding foreign direct investment's influence on domestic entrepreneurial activity. Consistent with our theory, our analyses revealed that foreign direct investment is positively related to the level of new firm registration. We also found the strength of this main effect varies across countries, depending on certain socio-political conditions. Specifically, our research indicates positive FDI influence is stronger in countries with weak institutional support for private enterprise, lacking political stability, and having lower general human capital. Supplementary analyses regarding spillover longevity also revealed FDI is positively related to higher entrepreneurial activity both during the short-term (within one year) and over extended periods (up to three years). These findings have several implications for scholarship at the intersection of the FDI and international entrepreneurship literatures. Our results make it clear that inward-cross-border influence from foreign investment should be considered when evaluating the range of macro-level determinants of domestic entrepreneurial activity (Jones et al., 2011). Our work provides further evidence of the context-dependent nature of entrepreneurship. Specifically, our moderation results suggest FDI can substitute for particular domestic shortcomings in fostering entrepreneurial activity, such as in emerging and developing economies. These new explanations provide deeper insights into understanding entrepreneurial activity in regions now attracting greater foreign investment and becoming a vital part of the worldwide economy (Batjargal, 2010 and Bruton et al., 2008).

As global foreign direct investment continues to bring economies across national borders together, we report findings for how cross-border investments can stimulate business creation within to host economies. The positive benefits on business creation are strongest in regions with weak institutional infrastructures and low overall educational attainment. It is our hope these findings will not only assist policy makers seeking to cultivate an entrepreneurial climate in these regions (Nolan, 2003 and United Nations, 2004), but also broaden the theoretical scope of understanding how societal conditions promote firm creation.