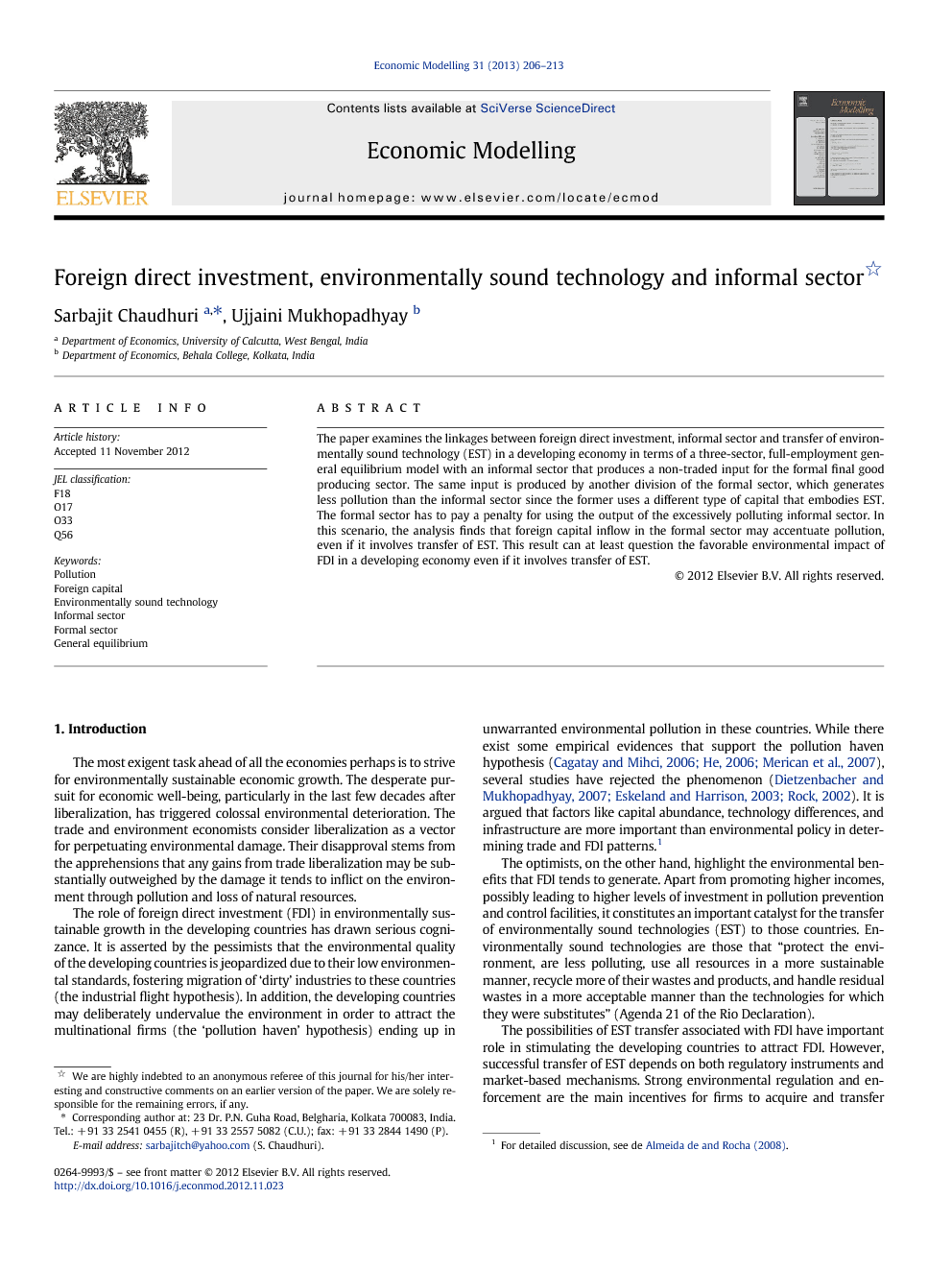 The most exigent task ahead of all the economies perhaps is to strive for environmentally sustainable economic growth. The desperate pursuit for economic well-being, particularly in the last few decades after liberalization, has triggered colossal environmental deterioration. The trade and environment economists consider liberalization as a vector for perpetuating environmental damage. Their disapproval stems from the apprehensions that any gains from trade liberalization may be substantially outweighed by the damage it tends to inflict on the environment through pollution and loss of natural resources. The role of foreign direct investment (FDI) in environmentally sustainable growth in the developing countries has drawn serious cognizance. It is asserted by the pessimists that the environmental quality of the developing countries is jeopardized due to their low environmental standards, fostering migration of ‘dirty’ industries to these countries (the industrial flight hypothesis). In addition, the developing countries may deliberately undervalue the environment in order to attract the multinational firms (the ‘pollution haven’ hypothesis) ending up in unwarranted environmental pollution in these countries. While there exist some empirical evidences that support the pollution haven hypothesis (Cagatay and Mihci, 2006, He, 2006 and Merican et al., 2007), several studies have rejected the phenomenon (Dietzenbacher and Mukhopadhyay, 2007, Eskeland and Harrison, 2003 and Rock, 2002). It is argued that factors like capital abundance, technology differences, and infrastructure are more important than environmental policy in determining trade and FDI patterns.1 The optimists, on the other hand, highlight the environmental benefits that FDI tends to generate. Apart from promoting higher incomes, possibly leading to higher levels of investment in pollution prevention and control facilities, it constitutes an important catalyst for the transfer of environmentally sound technologies (EST) to those countries. Environmentally sound technologies are those that “protect the environment, are less polluting, use all resources in a more sustainable manner, recycle more of their wastes and products, and handle residual wastes in a more acceptable manner than the technologies for which they were substitutes” (Agenda 21 of the Rio Declaration). The possibilities of EST transfer associated with FDI have important role in stimulating the developing countries to attract FDI. However, successful transfer of EST depends on both regulatory instruments and market-based mechanisms. Strong environmental regulation and enforcement are the main incentives for firms to acquire and transfer new technologies, so that to make foreign investment conducive to the influx of EST, it is imperative to progressively develop and implement strong environmental regulation, nonetheless, allowing for flexibility in the enforcement of environmental standards and having positive disposition towards a plant's experimentation with alternative cost-effective solutions (Luken et al., 2008). Moreover, various direct incentives such as the elimination or reduction of taxes on income or sales from investment, the deferment of taxes, tax holidays, and taxation graded according to the level of environmental improvement achieved, may be instrumental (Juma, 1994 and Less and McMillan, 2005) in creating a favorable investment environment for EST transfer. Therefore, it is environmentally viable for countries to pull FDI only if the costs that they have to bear in the form of incentives are outweighed by the environmental benefits from transfer of EST. However, empirical evidence on the role of FDI in transfer of cleaner technology is rather inadequate and inconclusive. Even if the MNCs from developed countries have important roles in terms of cleaner technologies, this does not hold for MNCs from developing countries (Zarsky, 1999).2 The environmental impact of FDI on host countries appears even more debatable in the developing countries due to the persistence of urban informal sector.3 The presence of a large number of pollution sources in the form of informal sector units that lack knowledge, funds, technology and skills to treat their effluent, is likely to frustrate environmental instruments and policies. Empirical evidences indicate that the urban informal sector units mostly produce intermediate inputs for the formal manufacturing sector on a subcontracting basis.4 In a number of cases, the large industries give subcontract to production units that produce a component of the formal sector output, mostly involving environmentally “dirty” tasks and processes, on an informal basis.5Perrings et al. (1995) argue that such subcontracting is an economical way for formal sector firms to avoid investment in ESTs made obligatory by the regulatory authority. This is due to the fact that since the informal sector firms are difficult to identify and monitor, they remain outside the purview of environmental regulations and face fewer incentives to prevent pollution.6 The interlinkage between FDI and pollution of developing countries may occur in two different ways: first, pollution increases due to subcontracting between the formal firms (including the foreign owned ones), and the polluting informal units; secondly, transfer of EST in firms where there is no such subcontracting has favorable effect on pollution. However, there hardly exist any work that focus on the nexus between, FDI, informal sector and EST.7 The main objective of the present paper is to examine the effects of an inflow of foreign capital on the level of domestic pollution in a developing economy in the presence and absence of transfer of EST. A three sector full-employment general equilibrium model consisting of three sectors, a rural sector, an informal and a formal sector has been considered. The formal sector has two divisions, one producing a final manufacturing good and another producing a non-traded intermediate input for production in the final good sector. The intermediate input is also produced in the informal sector. Both the formal and informal intermediate input producing sectors pollute the environment. But while the formal sector has access to EST, the informal sector uses backward technology, so that the latter generates more pollution. The paper shows that under some reasonable conditions, an inflow of foreign capital in the formal sector involving adoption may actually aggravate domestic pollution while foreign capital inflow in the informal sector without transfer of EST may reduce pollution. These interesting results despite simplicity and abstraction of the analytical framework can at least question the favorable environmental impact of FDI even if it involves transfer of EST.