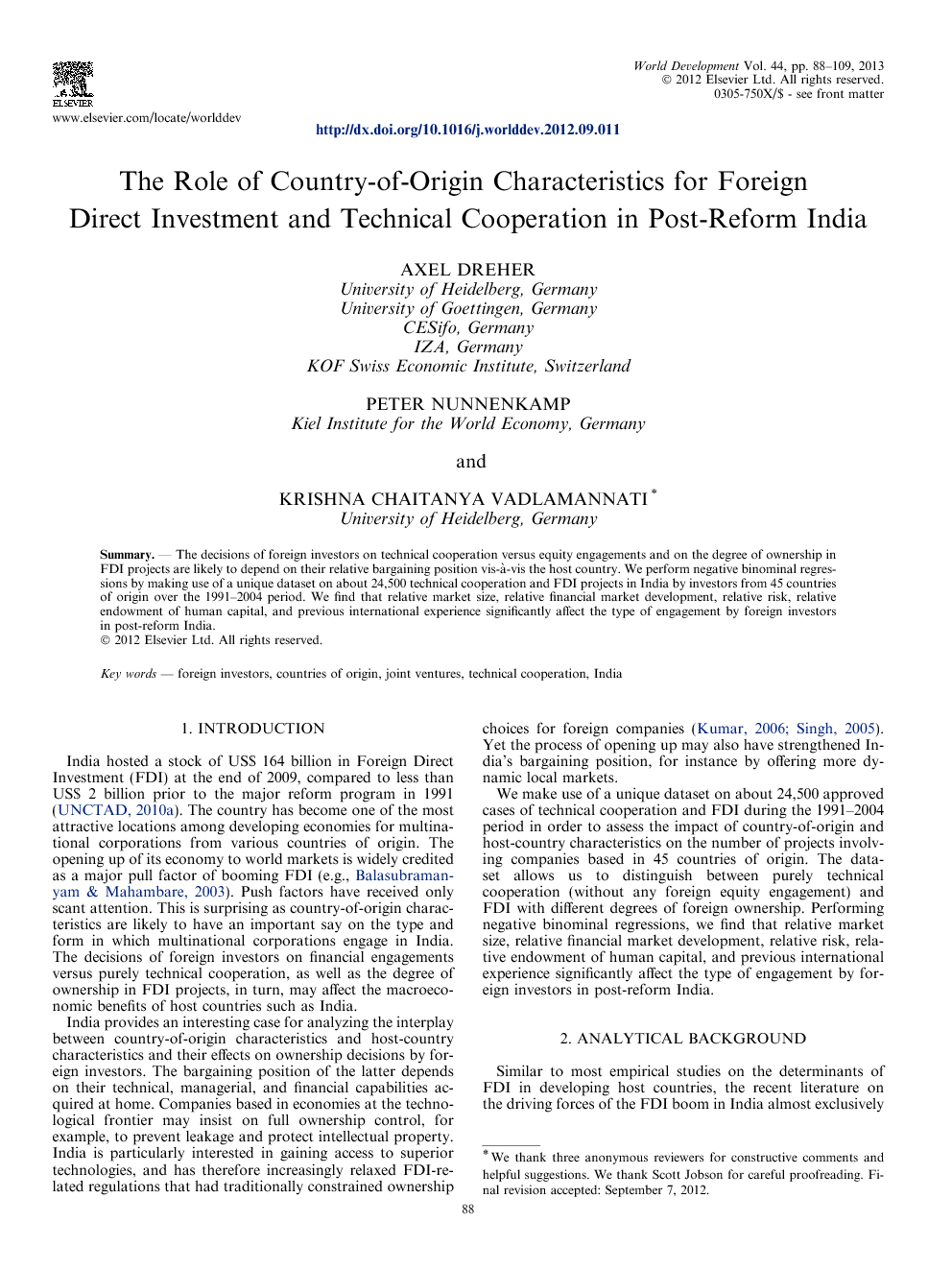 The decisions of foreign investors on technical cooperation versus equity engagements and on the degree of ownership in FDI projects are likely to depend on their relative bargaining position vis-à-vis the host country. We perform negative binominal regressions by making use of a unique dataset on about 24,500 technical cooperation and FDI projects in India by investors from 45 countries of origin over the 1991–2004 period. We find that relative market size, relative financial market development, relative risk, relative endowment of human capital, and previous international experience significantly affect the type of engagement by foreign investors in post-reform India.

India hosted a stock of US$ 164 billion in Foreign Direct Investment (FDI) at the end of 2009, compared to less than US$ 2 billion prior to the major reform program in 1991 (UNCTAD, 2010a). The country has become one of the most attractive locations among developing economies for multinational corporations from various countries of origin. The opening up of its economy to world markets is widely credited as a major pull factor of booming FDI (e.g., Balasubramanyam & Mahambare, 2003). Push factors have received only scant attention. This is surprising as country-of-origin characteristics are likely to have an important say on the type and form in which multinational corporations engage in India. The decisions of foreign investors on financial engagements versus purely technical cooperation, as well as the degree of ownership in FDI projects, in turn, may affect the macroeconomic benefits of host countries such as India. India provides an interesting case for analyzing the interplay between country-of-origin characteristics and host-country characteristics and their effects on ownership decisions by foreign investors. The bargaining position of the latter depends on their technical, managerial, and financial capabilities acquired at home. Companies based in economies at the technological frontier may insist on full ownership control, for example, to prevent leakage and protect intellectual property. India is particularly interested in gaining access to superior technologies, and has therefore increasingly relaxed FDI-related regulations that had traditionally constrained ownership choices for foreign companies (Kumar, 2006 and Singh, 2005). Yet the process of opening up may also have strengthened India’s bargaining position, for instance by offering more dynamic local markets. We make use of a unique dataset on about 24,500 approved cases of technical cooperation and FDI during the 1991–2004 period in order to assess the impact of country-of-origin and host-country characteristics on the number of projects involving companies based in 45 countries of origin. The dataset allows us to distinguish between purely technical cooperation (without any foreign equity engagement) and FDI with different degrees of foreign ownership. Performing negative binominal regressions, we find that relative market size, relative financial market development, relative risk, relative endowment of human capital, and previous international experience significantly affect the type of engagement by foreign investors in post-reform India.

India’s opening-up to world markets in the early 1990s has widely been credited as a major pull factor of booming FDI. At the same time, the comprehensive overhaul of traditional restrictions and regulations has offered foreign investors more options in their type of engagement in India. This may have improved the bargaining position of foreign investors, notably those based in countries operating at the technological frontier, vis-à-vis the Indian authorities. Foreign investors tend to prefer full ownership control in order to prevent leakage and protect intellectual property, while India is particularly interested in spillovers from technical cooperation and joint ventures with local partners. The interplay between country-of-origin characteristics and host-country characteristics has received limited attention in the previous literature on the determinants of FDI, even though the ownership decisions by foreign investors are relevant to the macroeconomic benefits that host countries can reap. We have made use of a unique dataset on about 24,500 approved cases of technical cooperation and FDI in India during the 1991–2004 period, in order to assess the impact of these country characteristics on the number of projects carried out by investors from 45 countries of origin. The dataset allowed us to distinguish between purely technical cooperation and FDI with different degrees of foreign ownership. We performed negative binominal regressions and tested for different effects of our explanatory variables on specific types of projects. Various variables derived from a bargaining framework prove to be relevant in shaping the decisions on technical cooperation versus equity engagements, and on the degree of foreign ownership in FDI projects. Market size, the sophistication of financial markets, and human capital endowment—all defined for the country of origin relative to India—are typically associated with more projects of all types. The same applies to the country of origin’s international experience, its general level of economic development, and the protection of foreign investors through bilateral investment treaties. This does not imply, however, that the impact of our explanatory variables is the same across different types of projects. In fact, the impact on the number of technical cooperation projects tends to be significantly weaker than the impact on the number of FDI projects. In particular, we find that foreign investors from larger and richer countries of origin with more sophisticated financial markets are in a better position to make the Indian authorities agree to wholly-owned subsidiaries. On the other hand, our results also suggest that foreign investors avoid the potentially large sunk costs of wholly-owned subsidiaries under conditions of relatively high political risk in India. In contrast to the traditional view on exchange rate-related wealth effects, we find stronger currencies of the countries of origin to be associated with fewer FDI projects—probably because large and sudden currency fluctuations lead to considerable uncertainty. The differences in the impact of country-of-origin characteristics on specific types of FDI are less clear. The bargaining framework is supported insofar as the impact of almost all characteristics proves to be stronger on wholly-owned subsidiaries than on majority JVs. However, the impact of several characteristics is also stronger on minority JVs than on majority JVs. This could be partly because foreign investors preferred minority JVs in the immediate aftermath of the reform program of 1991, as they were the only real alternative to technical cooperation at the time. However, the impact of several variables proved to be surprisingly stable over time when splitting the period of observation into two sub-periods. Constrained choices may have remained an issue in the more recent past, notably for projects in some segments of the tertiary sector. Future research may address this issue by refining the industry classification of FDI projects, and by re-assessing the interplay between country-of-origin and host-country characteristics once ownership restrictions have been relaxed in industries which are still regulated, such as retail trade. More generally, a broader set of industry-specific estimations could offer better insights into the relative bargaining power of multinational enterprises and host country governments by accounting for technological sophistication and absorptive capacity at the industry level. While disaggregated analyses are clearly warranted, data constraints remain a limiting factor. Unless more data become available, it is also difficult to overcome another limitation of the present study which employs a simple bilateral source–host country framework. Such a framework appears to be most appropriate for horizontal FDI and as long as foreign investors are mainly interested in penetrating the local markets of host countries (see also Schnitzer, 2002). However, as Kobrin (1987, pp. 635–636) noted already 25 years ago, global integration may have “enormous significance for future shifts in bargaining power.” Specifically, the increasing complexity of transnational operations and the integration of various host countries into vertical FDI and global value chains may weaken the bargaining position of any single host country. Addressing these implications empirically should figure high on the future research agenda once current data limitations become less binding.