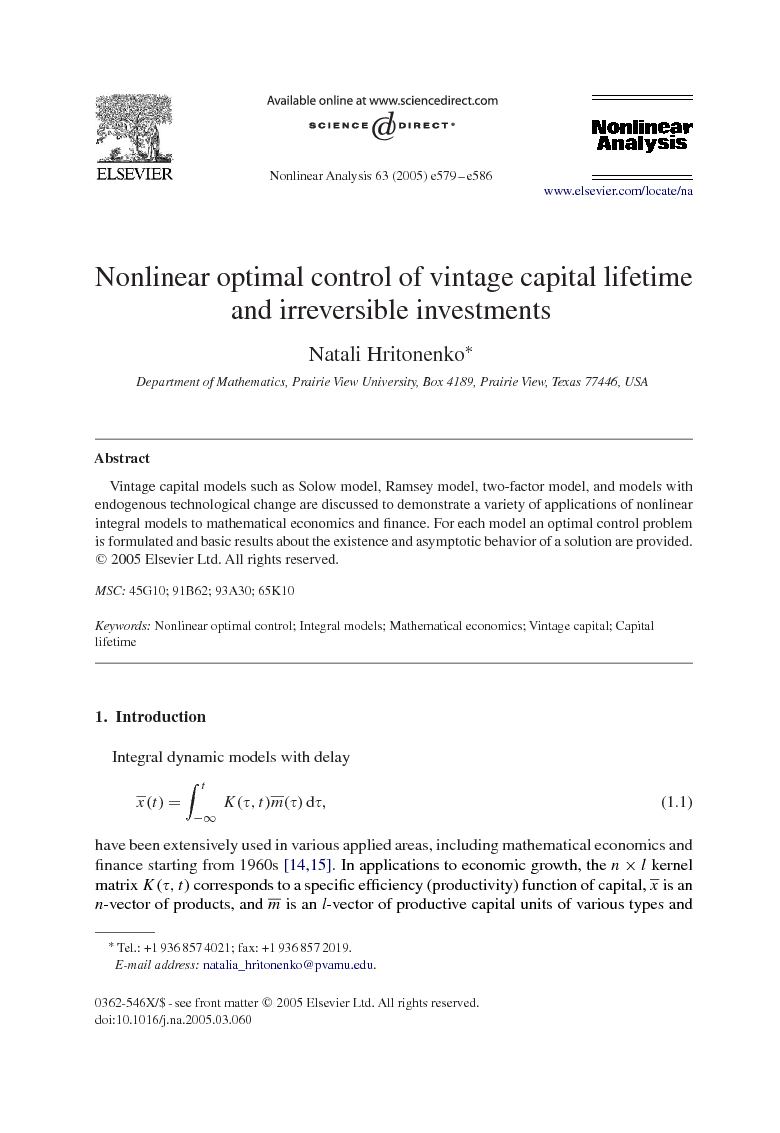 Vintage capital models such as Solow model, Ramsey model, two-factor model, and models with endogenous technological change are discussed to demonstrate a variety of applications of nonlinear integral models to mathematical economics and finance. For each model an optimal control problem is formulated and basic results about the existence and asymptotic behavior of a solution are provided.

Integral dynamic models with delay x¯(t)=∫t−∞K(τ,t)m¯(τ)dτ,have been extensively used in various applied areas, including mathematical economics and finance starting from 1960s [14] and [15]. In applications to economic growth, the n×l kernel matrix K(τ,t) corresponds to a specific efficiency (productivity) function of capital, x¯ is an n-vector of products, and m¯¯¯ is an l-vector of productive capital units of various types and resources. The structure of K(τ,t) reflects different situations in economics and finance: its dependence on t describes a non-embodied (autonomous) technological change (TC), the dependence on t−τ illustrates the economic depreciation and physical deterioration of the capital, and the dependence on τ represents the TC embodied in capital. The case ∂K(τ,t)/∂τ>0 corresponds to a technical progress when new capital is more efficient. In economics such models are known as vintage capital models (VCMs). They represent a new prospective mathematical tool for modeling technological innovation. It is a fast growing area of research. Its strong impact on mathematical finance is motivated by efficient description of fundamental finance characteristics such as cost of capital, risk of investment decisions, dynamics of finance investments, market uncertainty, etc. The validity of VCMs on real data is provided, i.e., in [3], [5] and [16]. In control theory, an n×n control matrix Λ(τ,t)={λij(τ,t)},0⩽λij⩽1, of the intensities of capital use can be introduced to reflect the varying load of different types of capital vintages in production of various types of products. In many cases there is a feedback in the input–output system and some of the outputs x¯ are used as new investments: m¯¯¯=Yx¯. The matrix Y(τ,t) is another control that represents the distribution of product in the constructed model. If Y(τ,t)=Y(τ), then the investment decisions made at the time τ of the new capital creation are irreversible [13] and cannot be changed later. Then the model (1.1) becomes x¯(t)=∫t−∞K(τ,t)Λ(τ,t)Y(τ)x¯(τ)dτ.In this case it is not allowed to change the type of machines that are already installed or change them to produce another product type. The equipment can be scraped only when it becomes obsolete. Assuming that the TC is progressive (∂K(τ,t)/∂τ>0), a natural requirement is the use of the newest and most efficient capital. It leads to a special form of the two-dimensional control Λ: Λij(τ,t)=Λii(τ,t)={1,0,ai(t)⩽τ⩽t,τ<ai(t) which is now determined by a one-variable control a that describes a moment when a capital unit is removed from operation. Control form (1.3) is important in capital renovation. It decreases the dimension of the control problem (1.2), but creates an essential nonlinearity. Model (1.2) turns to be a model with unknown delay: x¯(t)=∫ta(t)K(τ,t)Y(τ,t)x¯(τ)dτ. Model (1.4) can be classified as a model with a Leontieff-type production function (PF) (clay–clay). In economics such integral models describe VCMs that will be discussed in Section 2. If K depends on other economic functions such as capital, labor, etc., then we obtain putty–clay models with multi-factor PFs. Examples of such models will be given in Section 3. Partial differential equations (PDEs) are another alternative mathematical tool used for modeling dynamic systems with delay. They have been used in [1] to study VCMs with constant capital lifetime. As it is shown in [10] and [11], PDEs do not fit well the systems with endogenous delay and the use of integral equations (IEs) as a more general and flexible tool are recommended. Integral models similar to presented ones in the following sections have been intensively investigated because of their applied importance. Malcomson [12] has investigated an optimal control problem (OCP) with unknown lifetime of one-product VCMs of a firm and derived its gradient at the first time. Van Hilten [6] has found conditions when constant capital lifetime is optimal, showed the importance of the zero-investment period in a finite horizon OCP and estimated its length. Benhabib [2] has investigated VCM with two-factor PFs. Sakellaris [13], Barucci and Gozzi [1] have investigated VCMs with multi-factor PFs and constant lifetime. Boucekkine et al. [4] have considered the optimal endogenous lifetime of capital on the infinite horizon. In [9], [10] and [11] the asymptotics and turnpike properties of the optimal capital lifetime have been investigated on finite and infinite horizons and an exact solution has been constructed in special cases.

Several VCMs are discussed and developed in this paper to show the different applications of mathematical modelling to economics and finance. The models vary in their features. For example, the first three models describe exogenous technological process (TC) while the last one is with endogenous TC. The second model (Section 3.1) describes a multi-sector production process (PP) whereas all others portray one-sector PP. The third model (Section 3.2) uses a multi-factor production function (PF) and others use one-factor PFs. The first model is of the clay–clay type, while the last is of a putty–clay type, and so on. Although these models have different characteristics, all of them are expressed by nonlinear integral equations, and the lifetime of capital is taken to be one of the optimal controls. Basic results presented for these models reveal the rational technological strategies of a firm in evolutionary economics. The rational lifetime of capital in most cases (Sections 2, 3.1 and 3.2) appears to be independent of the total capital stock and the initial vintage structure. It is defined only by the PF structure and the fundamental technological (the rate of the embodied TC) and financial (the investment-discount rate) characteristics.