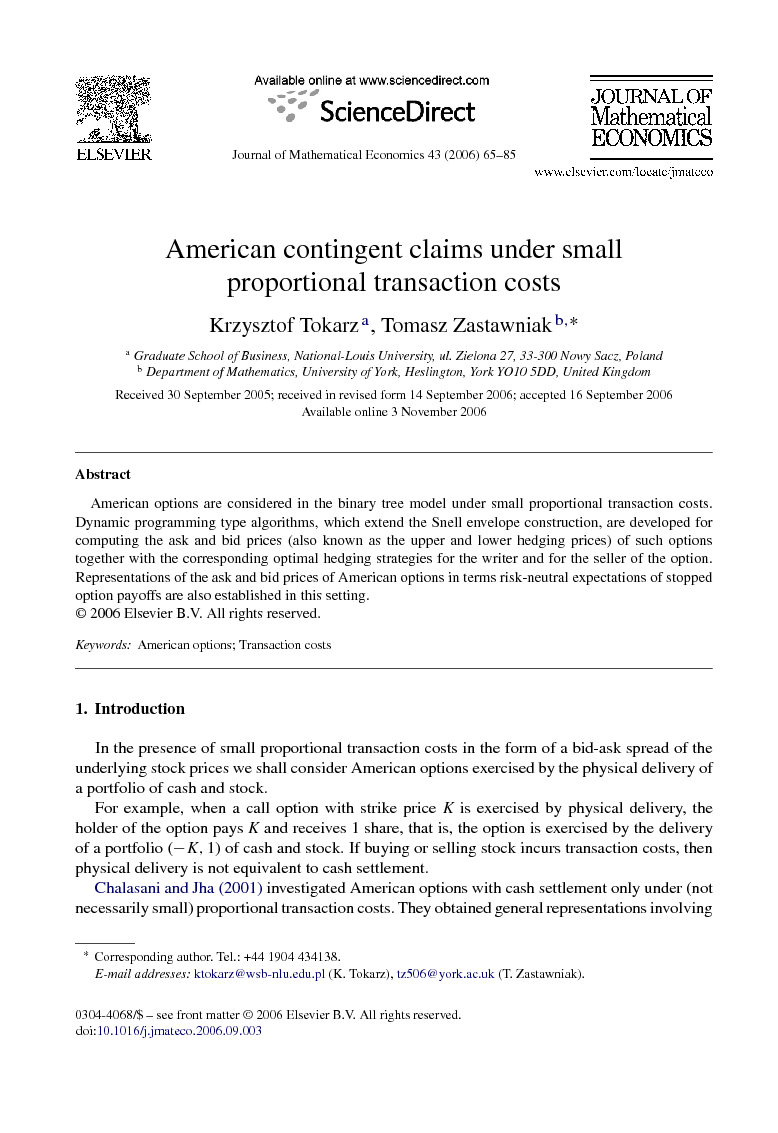 American options are considered in the binary tree model under small proportional transaction costs. Dynamic programming type algorithms, which extend the Snell envelope construction, are developed for computing the ask and bid prices (also known as the upper and lower hedging prices) of such options together with the corresponding optimal hedging strategies for the writer and for the seller of the option. Representations of the ask and bid prices of American options in terms risk-neutral expectations of stopped option payoffs are also established in this setting.

We have established a procedure for computing the ask price π a ( ξ, ζ ) of an American contingent claim ( ξ, ζ ) under small proportional transaction costs in the binary tree setting, resembling the standard construction of the Snell envelope. A suitable algorithm has also been developed for computing the bid price π b ( ξ, ζ ). Moreover, we have constructed optimal strategies to hedge long and short positions in American options, and established representations of the ask and bid option prices in terms of the initial values of these strategies, and also in terms of risk-neutral expectations of stopped payoffs. In addition, optimal stopping times ˆ τ for the writer and ˇ τ for the buyer of the option have been constructed. A distinctive feature of the algorithms developed under small transaction costs is that two quantities need to be tracked at each tree node, rather than a single one as in the standard iterative construction of the Snell envelope in the friction-free case. In the numerical examples the algorithms have been applied to compute the ask and bid prices of American options in a realistic setting (option expiry T = 1 year, daily rehedging of portfolios with N = 250, and round-trip transaction costs 2 k = 1% typical of large capitalisation stocks) satisfying the small transaction costs condition. The numerical results are compared to the earlier work by Boyle and Vorst (1992) for European options under proportional transaction costs. The small transaction costs assumption (2.2) is shown to lead to a very similar restriction on the time step versus transaction cost rate as in Leland type approaches. We have observed that the bid prices of American and European calls are not necessarily the same, and proved that the ask prices are equal to one another. Moreover, the optimal stopping times may be different for traders hedging long and short positions in American options under transaction costs. A natural question arises as to what will happen if the small costs assumption (2.2) is relaxed, so that only the no-arbitrage condition prevails. Results in Tokarz (2004) and Roux et al. (2006) , which apply to European options only, suggest that the algorithms for American options might need to be modified by keeping track of more than two quantities at each tree node whenever the bid-ask spreads for the stock price at adjacent nodes overlap. The work of Chalasani and Jha (2001) indicates that the constructions would also need to accommodate randomised stopping times in place of ordinary ones. The reason why ordinary stopping times are sufficient under small transaction costs is, essen- tially, that every adapted process S such that S a t ≤ S t ≤ S a t for each t = 0 , 1 ,...,T can be regarded as the stock price process in an ordinary (friction-free and arbitrage-free) binomial tree model, and the price and optimal stopping time for any given American option under small transaction costs coincide with those obtained in such an ordinary binary tree model, namely that with the stock price process ˆ S constructed in the proof of Theorem 3.2 . In general, this is no longer the case under arbitrary proportional transaction costs. Finally, with reference to Bouchard and Temam (2005) , we observe that their Proposition 4.1 might at first sight appear to contradict our results. For example, consider the American option with payoff ξ t = S a 0 1 { t = 0 } and ζ t = 1 { t = 1 } . Our approach gives the writer’s price of the option as π a ( ξ, ζ ) = S a 0 . However, according to Proposition 4.1 in Bouchard and Temam (2005) , the initial amount S a 0 is insufficient to construct a superhedging strategy for this option whenever S b 0 <S a 0 . To reconcile this apparent contradiction we observe that in our approach we follow Chalasani and Jha (2001) in that the rebalancing of the hedging portfolio at any node occurs once the decision of whether or not to exercise the option at that node has been made by the buyer. Meanwhile, Bouchard and Temam (2005) follow a different convention, namely in their case portfolio rebalancing occurs immediately before it becomes known whether or not the option will be exercised at any give node. This means that in fact there is no contradiction.