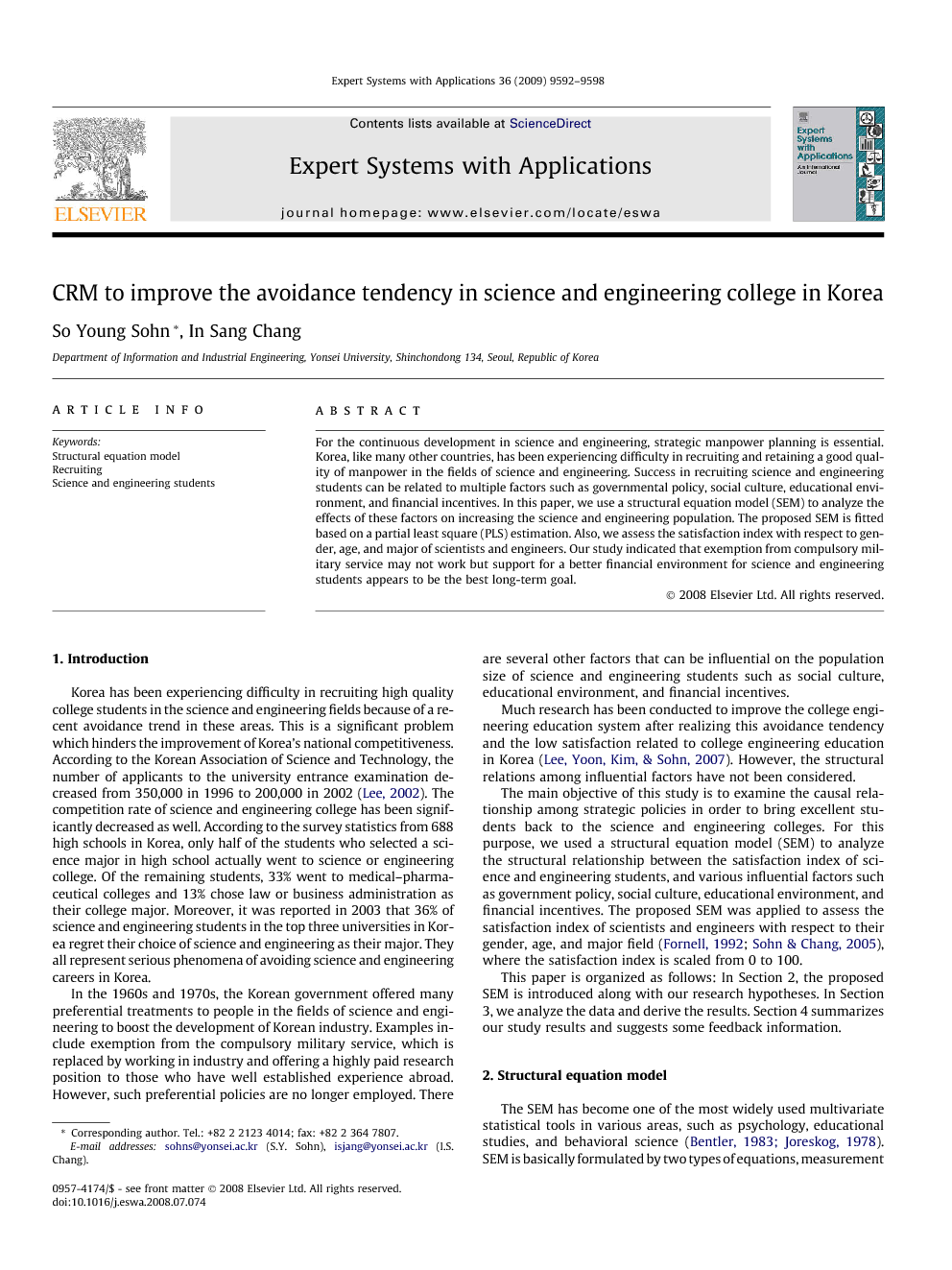 Korea has been experiencing difficulty in recruiting high quality college students in the science and engineering fields because of a recent avoidance trend in these areas. This is a significant problem which hinders the improvement of Korea’s national competitiveness. According to the Korean Association of Science and Technology, the number of applicants to the university entrance examination decreased from 350,000 in 1996 to 200,000 in 2002 (Lee, 2002). The competition rate of science and engineering college has been significantly decreased as well. According to the survey statistics from 688 high schools in Korea, only half of the students who selected a science major in high school actually went to science or engineering college. Of the remaining students, 33% went to medical–pharmaceutical colleges and 13% chose law or business administration as their college major. Moreover, it was reported in 2003 that 36% of science and engineering students in the top three universities in Korea regret their choice of science and engineering as their major. They all represent serious phenomena of avoiding science and engineering careers in Korea. In the 1960s and 1970s, the Korean government offered many preferential treatments to people in the fields of science and engineering to boost the development of Korean industry. Examples include exemption from the compulsory military service, which is replaced by working in industry and offering a highly paid research position to those who have well established experience abroad. However, such preferential policies are no longer employed. There are several other factors that can be influential on the population size of science and engineering students such as social culture, educational environment, and financial incentives. Much research has been conducted to improve the college engineering education system after realizing this avoidance tendency and the low satisfaction related to college engineering education in Korea (Lee, Yoon, Kim, & Sohn, 2007). However, the structural relations among influential factors have not been considered. The main objective of this study is to examine the causal relationship among strategic policies in order to bring excellent students back to the science and engineering colleges. For this purpose, we used a structural equation model (SEM) to analyze the structural relationship between the satisfaction index of science and engineering students, and various influential factors such as government policy, social culture, educational environment, and financial incentives. The proposed SEM was applied to assess the satisfaction index of scientists and engineers with respect to their gender, age, and major field (Fornell, 1992; Sohn & Chang, 2005), where the satisfaction index is scaled from 0 to 100. This paper is organized as follows: In Section 2, the proposed SEM is introduced along with our research hypotheses. In Section 3, we analyze the data and derive the results. Section 4 summarizes our study results and suggests some feedback information.

Various factors are involved in recruiting and retaining good quality students in the fields of science and engineering. Therefore, it is not straightforward to determine their structural relationships. We used an SEM to find the direct and indirect effects of those factors on the shortage of manpower in the science and engineering fields. The results of this study show that financial support is the most influential factor. Therefore, giving financial incentives and diminishing financial burden of university students would be the best strategy to recruit high quality engineering students. It is interesting to note that the government policy factor has the most fundamental indirect effect. It can affect other factors such as socio-cultural, financial, and educational factors. This indicates that a pro-science attitude of government is a fundamental solution. It is also found that women’s satisfaction is lower than that of men in the science and engineering fields. Women in science and engineering need to be viewed and treated in a bit different way from men. The Korean government needs to formulate policies by which well qualified women scientists and engineers can find the right place to work and make their proper contribution accordingly. A diversification scheme can be adopted to increase the presence of women in many areas of science and engineering. Government regulation is needed to reward any employer that employs such a scheme. As for the age, older respondents have lower satisfactions ones. This indicates that satisfaction decreases as time goes on. Yet, interestingly, 80% of respondents in this survey said that they would choose a person in science and engineering as a spouse. The respondents of our survey consist of those in science and engineering fields. Major concern was given to the recruitment at the college level of engineering education. However, the population in these fields can be increased by allowing various ways to get higher education. It is said that in Europe much of the recruitment of engineering students depends on the transparency and articulation of the educational system. So the educational system can influence the size of the engineering population, too. For instance, the education system in Taiwan allows all prior qualifications can lead to a master’s and doctoral tract in science & engineering, unlike very strict Korean system. This is a very flexible system which can induce enlarged engineering population. In Korea, we do not have the same varieties as Taiwan has. The balance between quality and quantity can be an issue when deciding the flexibility of education system. Additional studies can be done adding diversified education systems as a factor, in order to accommodate a broader view. It will be interesting to compare our study result with other international cases. They are left for further study areas.