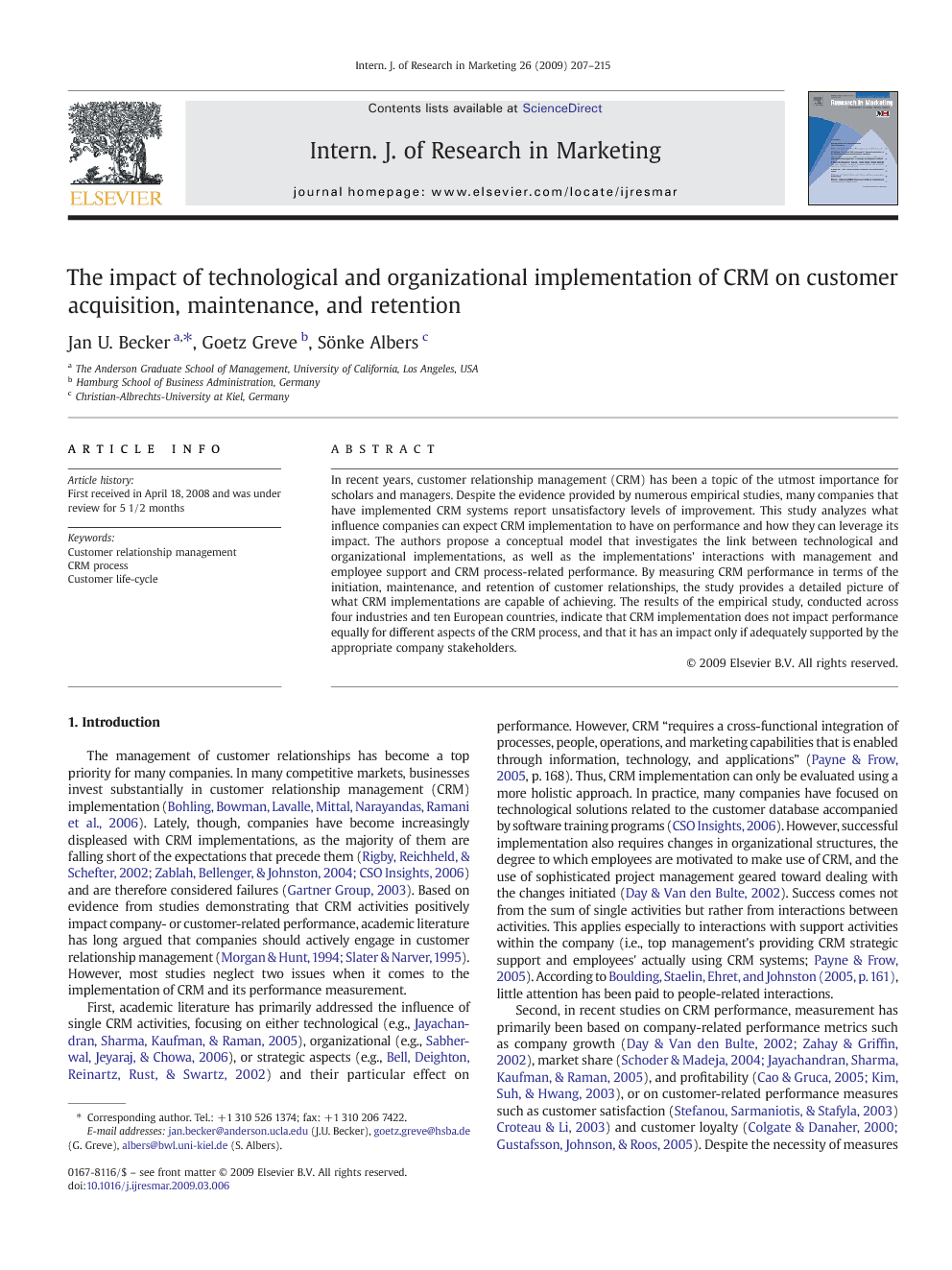 In recent years, customer relationship management (CRM) has been a topic of the utmost importance for scholars and managers. Despite the evidence provided by numerous empirical studies, many companies that have implemented CRM systems report unsatisfactory levels of improvement. This study analyzes what influence companies can expect CRM implementation to have on performance and how they can leverage its impact. The authors propose a conceptual model that investigates the link between technological and organizational implementations, as well as the implementations' interactions with management and employee support and CRM process-related performance. By measuring CRM performance in terms of the initiation, maintenance, and retention of customer relationships, the study provides a detailed picture of what CRM implementations are capable of achieving. The results of the empirical study, conducted across four industries and ten European countries, indicate that CRM implementation does not impact performance equally for different aspects of the CRM process, and that it has an impact only if adequately supported by the appropriate company stakeholders.

The management of customer relationships has become a top priority for many companies. In many competitive markets, businesses invest substantially in customer relationship management (CRM) implementation (Bohling, Bowman, Lavalle, Mittal, Narayandas, Ramani et al., 2006). Lately, though, companies have become increasingly displeased with CRM implementations, as the majority of them are falling short of the expectations that precede them (Rigby et al., 2002, Zablah et al., 2004 and CSO Insights, 2006) and are therefore considered failures (Gartner Group, 2003). Based on evidence from studies demonstrating that CRM activities positively impact company- or customer-related performance, academic literature has long argued that companies should actively engage in customer relationship management (Morgan and Hunt, 1994 and Slater and Narver, 1995). However, most studies neglect two issues when it comes to the implementation of CRM and its performance measurement. First, academic literature has primarily addressed the influence of single CRM activities, focusing on either technological (e.g., Jayachandran, Sharma, Kaufman, & Raman, 2005), organizational (e.g., Sabherwal, Jeyaraj, & Chowa, 2006), or strategic aspects (e.g., Bell, Deighton, Reinartz, Rust, & Swartz, 2002) and their particular effect on performance. However, CRM “requires a cross-functional integration of processes, people, operations, and marketing capabilities that is enabled through information, technology, and applications” (Payne & Frow, 2005, p. 168). Thus, CRM implementation can only be evaluated using a more holistic approach. In practice, many companies have focused on technological solutions related to the customer database accompanied by software training programs (CSO Insights, 2006). However, successful implementation also requires changes in organizational structures, the degree to which employees are motivated to make use of CRM, and the use of sophisticated project management geared toward dealing with the changes initiated (Day & Van den Bulte, 2002). Success comes not from the sum of single activities but rather from interactions between activities. This applies especially to interactions with support activities within the company (i.e., top management's providing CRM strategic support and employees' actually using CRM systems; Payne & Frow, 2005). According to Boulding, Staelin, Ehret, and Johnston (2005, p. 161), little attention has been paid to people-related interactions. Second, in recent studies on CRM performance, measurement has primarily been based on company-related performance metrics such as company growth (Day and Van den Bulte, 2002 and Zahay and Griffin, 2002), market share (Schoder and Madeja, 2004 and Jayachandran et al., 2005), and profitability (Cao and Gruca, 2005 and Kim et al., 2003), or on customer-related performance measures such as customer satisfaction (Stefanou, Sarmaniotis, & Stafyla, 2003) Croteau & Li, 2003) and customer loyalty (Colgate and Danaher, 2000 and Gustafsson et al., 2005). Despite the necessity of measures at the aggregate company level, it seems worthwhile to take a closer look at the value chain and assess why CRM sometimes fails to meet expectations (Lehmann, 2004). Since customer bases are not homogeneous with regard to the relationship stage (Dwyer et al., 1987 and Reinartz et al., 2004), the question arises of whether the implementations are equally able to serve CRM objectives in each of the relationship stages. If CRM activities influence each stage differently, negatively correlated results at each stage could lead to an insignificant impact on overall outcomes. In order to gather better diagnostic information on why some CRM implementations are successful while others are not, we measure how they meet intermediate objectives depending on different aspects of the customer relationship management process (i.e., acquiring new customers, maintaining and developing existing customers, or regaining already lost customers; see Reinartz, Krafft, & Hoyer, 2004). The contributions of this study are as follows. First, we introduce a novel set of performance measures that capture the process-related objectives of CRM. Second, we investigate the impact of CRM implementations on performance with regard to the CRM process. Third, we test the moderating effect of management and employee support on the performance of those CRM implementations. The results reveal which CRM objectives companies may actually expect the implementations to fulfill and, hence, show which CRM implementations companies should invest in. In the following section, we develop a conceptual model and identify hypotheses regarding the impact of organizational and technological CRM implementations on performance, as well as that of their interactions with management and employee support. Using data across four industries and ten European countries, our findings show that investments in CRM have little effect on performance unless top management and employees buy into organizational changes and technological systems and actively support them. As this effect does not hold equally for all aspects of the CRM process, we identify explanations as to why CRM implementations may be perceived as failing and provide suggestions for further research.

This paper contributes to the existing literature on customer relationship management by providing insights into how to judge the performance of CRM projects, as well as by furnishing explanations for perceived failures. Even though numerous studies have investigated several drivers of CRM performance, little knowledge has existed as to whether CRM implementations actually meet their objectives of initiating, maintaining, and retaining customer relationships. In this article, we have i) developed a conceptual framework that incorporates practically relevant CRM processes (i.e., organizational and technological implementations) as well as their interactions with people-related support activities and performance for all aspects of the CRM process; ii) empirically tested that framework; and iii) found out how technological and organizational implementations affect performance, and how this effect is moderated by management and employee support. The study provides novel insights in three respects. First, the use of performance measures that capture the objectives of each aspect of the CRM process provides a much more detailed picture of what CRM implementations are achieving by identifying which CRM objectives are actually met using the implementations. Second, we show what one may realistically expect from CRM implementations and, therefore, indicate where investments in CRM should be allocated. Third, the interaction effects between CRM implementations and management and employees show that CRM implementation cannot merely be “bought off the shelf” but that it needs to be actively supported within the company. However, some limitations should be kept in mind. First, given that this study was composed of only 90 observations, additional empirical research is necessary to support the results presented in this paper and to test their generalizability. Second, the fact that CRM implementations in the financial services industry yield far better performance than those in any other industry indicates that it is necessary to focus on specific industries. As neither levels of implementations nor support activities differ substantially across industries, further research should explore success factors on company or industry levels and refine the measures and scales used. Third, it should be kept in mind that the implementation of CRM is a dynamic process. Since we have only captured data at a single point in time, future research should focus on analyzing CRM from a longitudinal perspective rather than a cross-sectional one.