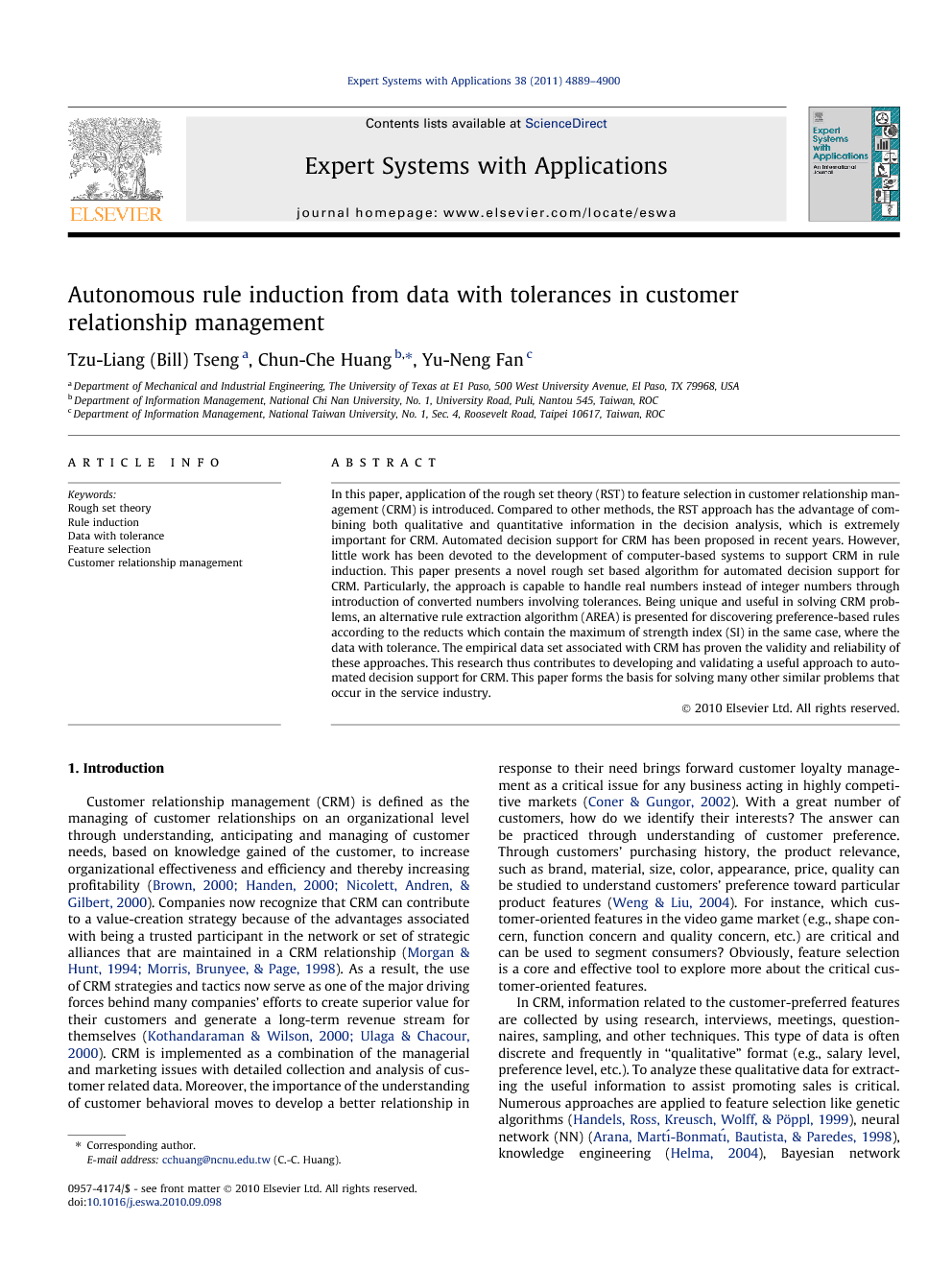 In this paper, application of the rough set theory (RST) to feature selection in customer relationship management (CRM) is introduced. Compared to other methods, the RST approach has the advantage of combining both qualitative and quantitative information in the decision analysis, which is extremely important for CRM. Automated decision support for CRM has been proposed in recent years. However, little work has been devoted to the development of computer-based systems to support CRM in rule induction. This paper presents a novel rough set based algorithm for automated decision support for CRM. Particularly, the approach is capable to handle real numbers instead of integer numbers through introduction of converted numbers involving tolerances. Being unique and useful in solving CRM problems, an alternative rule extraction algorithm (AREA) is presented for discovering preference-based rules according to the reducts which contain the maximum of strength index (SI) in the same case, where the data with tolerance. The empirical data set associated with CRM has proven the validity and reliability of these approaches. This research thus contributes to developing and validating a useful approach to automated decision support for CRM. This paper forms the basis for solving many other similar problems that occur in the service industry.

In this paper, a transformation procedure and an alternative rule extraction algorithm were developed for data sets with tolerance. The testing effort involved different data sets. The results of certain analyses indicate that the algorithms could handle large-scale data sets. The proposed approach makes good use of the concept of the tolerances and the alternative reducts. The research reported in this paper opens new avenues for CRM. The proposed approach can be used for CRM in analyzing customer preferred features, and through realization of customer features, segmenting customers to make efficient and effective development strategy can be accomplished. The standard formulation and the augmented formulation of the rough set based rule induction problems were presented in this paper. The standard formulation, in the case of an object-feature incidence matrix selecting the desired reducts, was solved by the mathematical programming approach and the rule identification algorithm. In a typical rough set based rule induction problem, an assumption was made that all features and objects (reducts) are of the same importance. However, one object may be assigned a higher weight than another one because of the frequency that each appears. Also, some attributes might be more important than others and therefore be assigned a higher weight. A method of concern is that features and objects are of unequal importance, and each of them carries a weight, was handled by the augmented formulation of the rough set based rule induction problem. To solve the augmented formulation, the AREA algorithm was developed. As demonstrated in this paper, the two rule identification algorithms are very efficient. The AREA algorithm allows one to take advantage of the user’s expertise. It can be used in an automated or interactive mode, or it can be interfaced with an expert system. In order to offer the right services to the right persons at the right time through the right channel automatically, the rough sets based approach has been used to analyze user profiles for CRM. By employing RST, decision rules can be extracted for each homogeneous cluster of data records and the relationships between different clusters. The rough set based approach shows great promise to CRM, where businesses can precisely offer the right products or services to the right segments of customers. When the weights of objects and features are concerned, the AREA algorithm is able to derive rules more effectively and efficiently. Additional large-scale testing will be the ultimate proof of the accuracy for CRM. The number of features necessary for decision-making was smaller that in the original data set. The reduced number of features should lower investigation costs of potential customers.