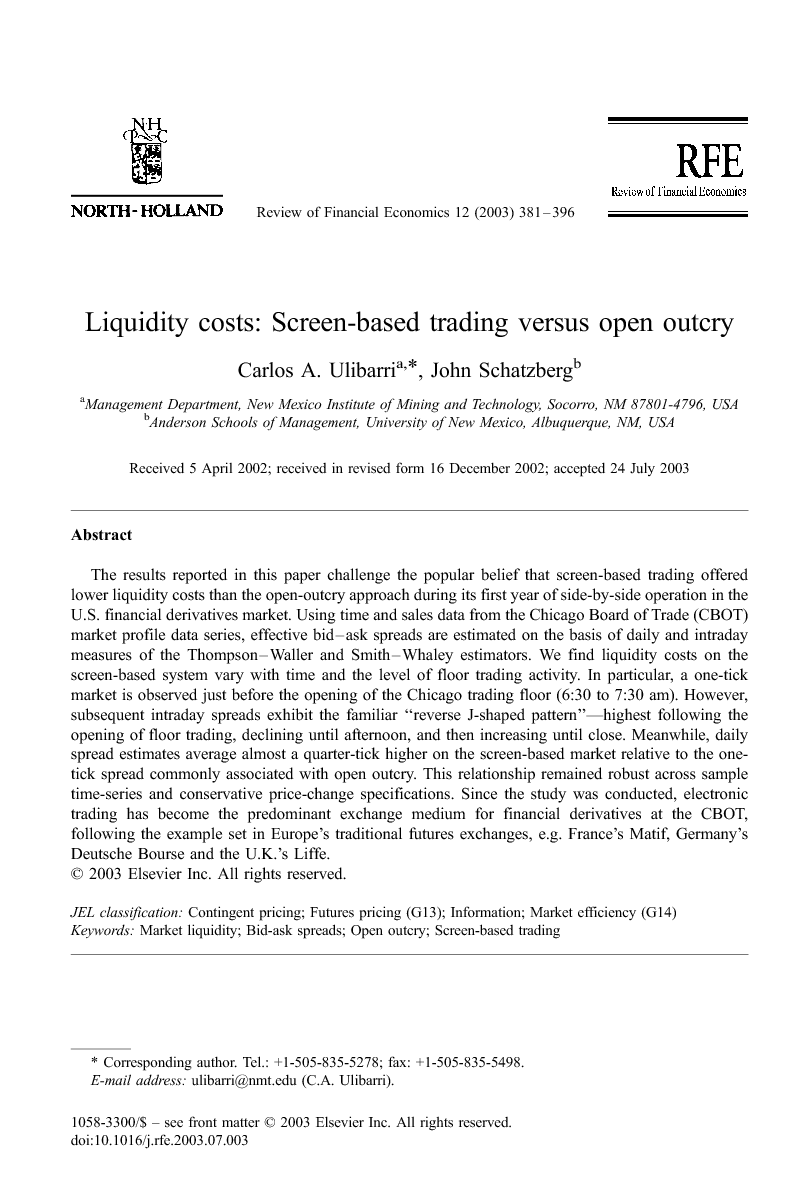 The results reported in this paper challenge the popular belief that screen-based trading offered lower liquidity costs than the open-outcry approach during its first year of side-by-side operation in the U.S. financial derivatives market. Using time and sales data from the Chicago Board of Trade (CBOT) market profile data series, effective bid–ask spreads are estimated on the basis of daily and intraday measures of the Thompson–Waller and Smith–Whaley estimators. We find liquidity costs on the screen-based system vary with time and the level of floor trading activity. In particular, a one-tick market is observed just before the opening of the Chicago trading floor (6:30 to 7:30 am). However, subsequent intraday spreads exhibit the familiar “reverse J-shaped pattern”—highest following the opening of floor trading, declining until afternoon, and then increasing until close. Meanwhile, daily spread estimates average almost a quarter-tick higher on the screen-based market relative to the one-tick spread commonly associated with open outcry. This relationship remained robust across sample time-series and conservative price-change specifications. Since the study was conducted, electronic trading has become the predominant exchange medium for financial derivatives at the CBOT, following the example set in Europe's traditional futures exchanges, e.g. France's Matif, Germany's Deutsche Bourse and the U.K.'s Liffe.

Stigler (1968) reminds us that competition motivates market participants to provide goods and services skillfully and economically, and at times experiment with new ways of doing business. This behavior is exemplified by The Chicago Board of Trade's (CBOT) advancement of e-trading platforms–innovations which gained an early acceptance in Europe, and have since transformed the mechanics of futures trading around the globe.1 Some futures exchanges have relied upon screen-based systems as a way to supplement open outcry markets by extending trading hours; examples include the Chicago Board of Trade's (CBOT's) Project A and a/c/e electronic trading systems, the New York Mercantile Exchange's ACCESS system (Ulibarri, 1998), and the Automated Pit Trading system used at the London International Financial Futures Exchange (LIFFE). In other applications, futures exchanges opt for exclusive use of screen-based systems, e.g., EUREX, the electronic German-Swiss exchange which formed with the merger between Deutsch Terminbose (DTB) and the Swiss Options and Financial Futures Exchange (SOFFEX); and Euronext.liffe, which merged the derivatives markets of Amsterdam, Brussels, LIFFE, Lisbon, and Paris under a single electronic platform, LIFFE CONNECT®. Following these examples, the CBOT currently pursues a marketing policy of simultaneous open outcry and electronic trading of its Treasury futures products, i.e., “side-by-side” trading (a.k.a. parallel trading). CBOT initiated parallel trading on September 28, 1998, by extending Project A electronic trading hours to run concurrently with open outcry. On August 27, 2000, CBOT broadened the electronic market via its a/c/e platform, offering direct access to its 30-year T-bond contracts in Asia and Europe. The trading strategies in the expanded electronic market rely heavily on narrow bid–ask spreads and high liquidity, thereby allowing efficient entry and exit from the market. The focus of the present study centers on the liquidity costs on CBOT's electronic market over the first year of parallel trading, before the a/c/e market expansion with EUREX. Liquidity costs are measured on the basis of the effective bid–ask spread, i.e., the spread between the actual market prices of a sell order and a buy order. The wider the spread, the higher the liquidity costs in providing immediate exchange (Demsetz, 1968). However, effective spreads on T-bond futures cannot be measured directly since CBOT does not record the sequence of all transactions prices and bid–ask quotes during the trading day. Thus, effective spreads must be inferred through estimation of specific bid–ask spread estimators using intraday price data. The present study relies on historical time and sales data to estimate daily and intraday spreads using bid–ask spread estimators developed by Thompson–Waller and Smith–Whaley. These representations of effective spreads help establish the generality of our results in comparing liquidity costs in CBOT's side-by-side trading platform over the early stage of operations. Anticipating results, we find liquidity costs on the screen-based system were lowest just before the opening of the floor trading sessions, i.e., between 6:30 and 7:20 a.m. (Chicago time). Once side-by-side operations begin, effective spreads on the screen-based system were higher in the first and last 30 min of each floor trading session than during the rest of the side-by-side trading day. This spread pattern is consistent with previous findings reported by Ma, Peterson, and Sears (1992) for the CBOT bond contract traded via open outcry. Our results also indicate daily spreads on the screen-based market were typically a quarter-tick higher than the minimum one-tick price changes recorded in CBOT's highly liquid open outcry pit. Overall, these results offer comparative measures for evaluating liquidity costs on the screen-based system relative to the timing and operation of side-by-side trading. Accordingly, the study begs new questions concerning the ongoing expansion of electronic trading in shifting liquidity away from the floor as was the experience at EUREX (Financial Times, August 24, 2000) and LIFFE (Futures Industry, December 2000/January 2001). The paper proceeds as follows. We review previous studies comparing liquidity costs on screen-based and open outcry systems in Section 2. Section 3 characterizes Project A operations and measurable components of the effective spread. The bid–ask spread estimators that are applied in measurement of daily and intraday bid–ask spreads are presented in Section 4. Section 5 describes the CBOT data set and sample constructions used in the application of the alternative estimators of daily and intraday bid–ask spreads. Section 6 reports the empirical results for CBOT's side-by-side market for long-term treasury contracts and compares these to previous studies. Section 7 concludes.

The cohabitation of open outcry and screen trading begs new questions about the relative liquidity costs of using screen-based systems. The results reported in this paper indicate e-traders incurred higher liquidity costs than floor traders during the first year of side-by-side market operations. Most screen trading occured an hour before the opening of the floor session (6:30 to 7:30 am), when liquidity costs approximated a one-tick market. After that, the intraday bid–ask spreads exhibit the familiar reverse J-shaped pattern found in previous studies of CBOT’s open outcry sessions: highest following the opening of floor trading, declining until afternoon, and then increasing until close. Meanwhile, estimates of daily bid–ask spreads average almost a quarter-tick higher than the one-tick spread found for open outcry. This relationship is robust across sample time series and conservative price-change specifications. Accordingly, liquidity costs on CBOT’s side-by-side trading platform are asymmetric, varying over time and the level of floor trading activity. What can be inferred from these findings? First, it is important to emphasize that screen trading over the study period became more of an ancillary means of exchange rather than an active counterpart in parallel trading. Consequently, our empirical results should not be interpreted as evidence of any general inefficiency in screen trading or that CBOT’s screen trading failed in its inaugural year. On the contrary, lower liquidity costs on the screen- based system are observed during periods of frequent trading, approximating the minimum 1-tick price move. Otherwise the scarcity of liquidity discouraged screen trading, not because of atypical price swings but rather increased order execution costs and price uncertainty. The empirical findings of the paper also help to explain recent institutional develop- ments aimed at expanding global screen trading; in particular, why the CBOT eventually replaced Project A with its current a/c/e system and concomitant alliance with EUREX. Indeed, the motivation behind CBOT’s recent electronic linkage to EUREX may be rationalized as an attempt at reducing liquidity costs by increasing economies of scale and scope. As noted at the onset of our paper, screen trading in Europe is well established, primarily due to prior success at the DTB and its current role at EUREX. Moreover, cost advantages in European screen trading are shown in Pirrong’s comparative study of the daily spreads on the DTB market. Thus, from a regulatory viewpoint, our results favor the need for fewer restraints on screen trading between U.S. and European derivatives markets, as these barriers would tend to impose higher transactions costs on their trading members.