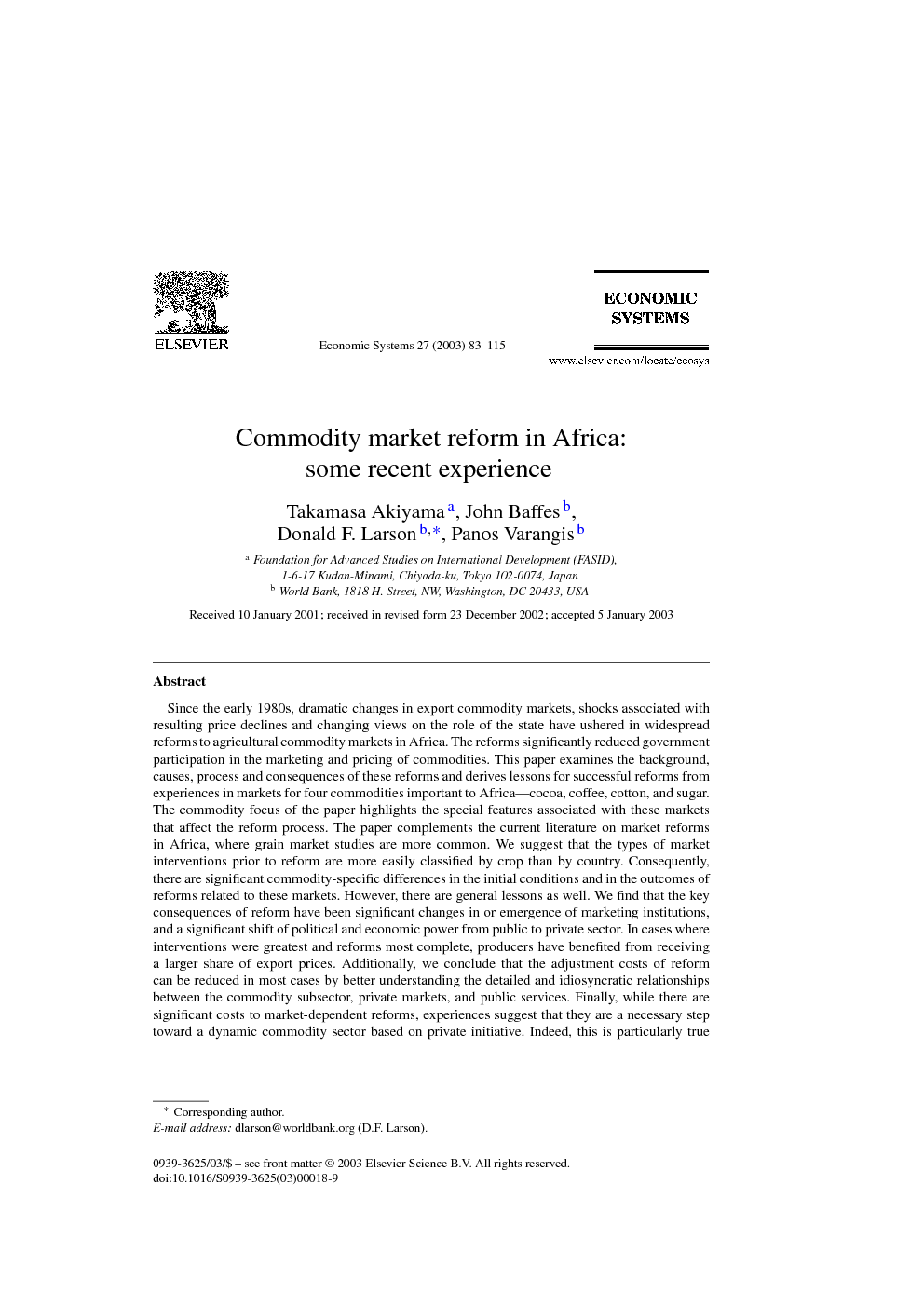 Since the early 1980s, dramatic changes in export commodity markets, shocks associated with resulting price declines and changing views on the role of the state have ushered in widespread reforms to agricultural commodity markets in Africa. The reforms significantly reduced government participation in the marketing and pricing of commodities. This paper examines the background, causes, process and consequences of these reforms and derives lessons for successful reforms from experiences in markets for four commodities important to Africa—cocoa, coffee, cotton, and sugar. The commodity focus of the paper highlights the special features associated with these markets that affect the reform process. The paper complements the current literature on market reforms in Africa, where grain market studies are more common. We suggest that the types of market interventions prior to reform are more easily classified by crop than by country. Consequently, there are significant commodity-specific differences in the initial conditions and in the outcomes of reforms related to these markets. However, there are general lessons as well. We find that the key consequences of reform have been significant changes in or emergence of marketing institutions, and a significant shift of political and economic power from public to private sector. In cases where interventions were greatest and reforms most complete, producers have benefited from receiving a larger share of export prices. Additionally, we conclude that the adjustment costs of reform can be reduced in most cases by better understanding the detailed and idiosyncratic relationships between the commodity subsector, private markets, and public services. Finally, while there are significant costs to market-dependent reforms, experiences suggest that they are a necessary step toward a dynamic commodity sector based on private initiative. Indeed, this is particularly true in countries and sectors where interventions were greatest and market-supporting institutions the weakest.

As a result of reforms initiated in the mid-1980s, there has been a sea change on how agricultural export commodities are marketed and financed in many African countries. The reforms have had profound ramifications for the roles of the government and the private sector, and hence for all the institutions related to agriculture. Generally, market reforms are intended to boost an economy’s efficiency—that is, to enhance the productivity of human talents and physical assets. In turn, these improvements in efficiency are expected to generate growth that improves the lives of many and especially the poor. In practice, reform has meant relying more heavily on markets to direct how resources are used and to direct future investments. In the context of this paper, the term market reform refers to steps taken toward opening domestic and export markets to competition and toward putting in place public and private institutions consistent with and supportive of private markets. For commodity markets, market reform has meant reducing government involvement in marketing and in production, increasing participation of the private sector in these activities and reducing distortions in commodity prices—especially producer prices. Measures implemented to achieve these goals have varied but often they included elimination or privatization of government marketing agencies, the introduction of competition in marketing, the elimination of administered prices, reduction in explicit and implicit taxes, and the privatization of government-owned assets. Events triggering commodity market reforms were not independent of broader political and economic changes in most countries and the consequences of reform are often linked as well. However, issues related to the approaches and effects of general and agricultural market reforms have been discussed elsewhere and receive minimal treatment here. Instead, our purpose is to discuss reform in the specific context of cocoa, coffee, cotton, and sugar markets, and to provide lessons by selectively drawing on African cross-country experiences in those markets.1 A central theme of this paper is that commodity markets warrant special attention for several reasons. First, commodities play an important role in many developing countries, especially in Africa. Reforms and the process of reform of commodity markets can affect communities and sometimes economies in significant ways. Conversely, it was the fiscal consequences of a sharp commodity price decline in the 1980s and the early 1990s that triggered economy-wide reforms in many African countries. Second, these markets illustrate well how special features—based in part on the production characteristics of the commodities and in part on historic developments—can affect the reform process and illustrate the importance of taking initial conditions into account when designing reform. Third, experience from commodity markets also illustrates how long-standing interventions like marketing boards and the public ownership of processing facilities can crowd out markets and institutions that support private initiative. Lessons on how private markets and policymakers cope with missing markets and institutions are noteworthy. Finally, close examination of reform at the commodity level illustrates the practical ways that changes in marketing systems often lead to a diffusion of political power as market participants take part in setting industry rules, standards, and policy. This is significant, since it provides commodity sector participants greater autonomy to adapt to future events. The commodities chosen for analysis in this paper are cocoa, coffee, cotton, and sugar. We focus on these commodities because of their importance for African countries. As for the country coverage, the paper focuses exclusively on Africa because (i) it is the region that depends most on primary commodities as sources of export revenues and employment; (ii) significant market reform for the four commodities has occurred in this region in recent years; and (iii) it is where development effort is most needed because of its low income levels and weak physical and institutional infrastructure. The rest of the paper is organized as follows. Section 2 provides a brief and general description of the types of prevalent market interventions and the motivation for those interventions prior to recent reforms. Section 3 discusses what prompted recent reforms. Section 4 examines the consequences of reform. Section 5 points out the scope and likely success of commodity market reform and discusses important lessons for managing the reform process. Section 6 concludes.