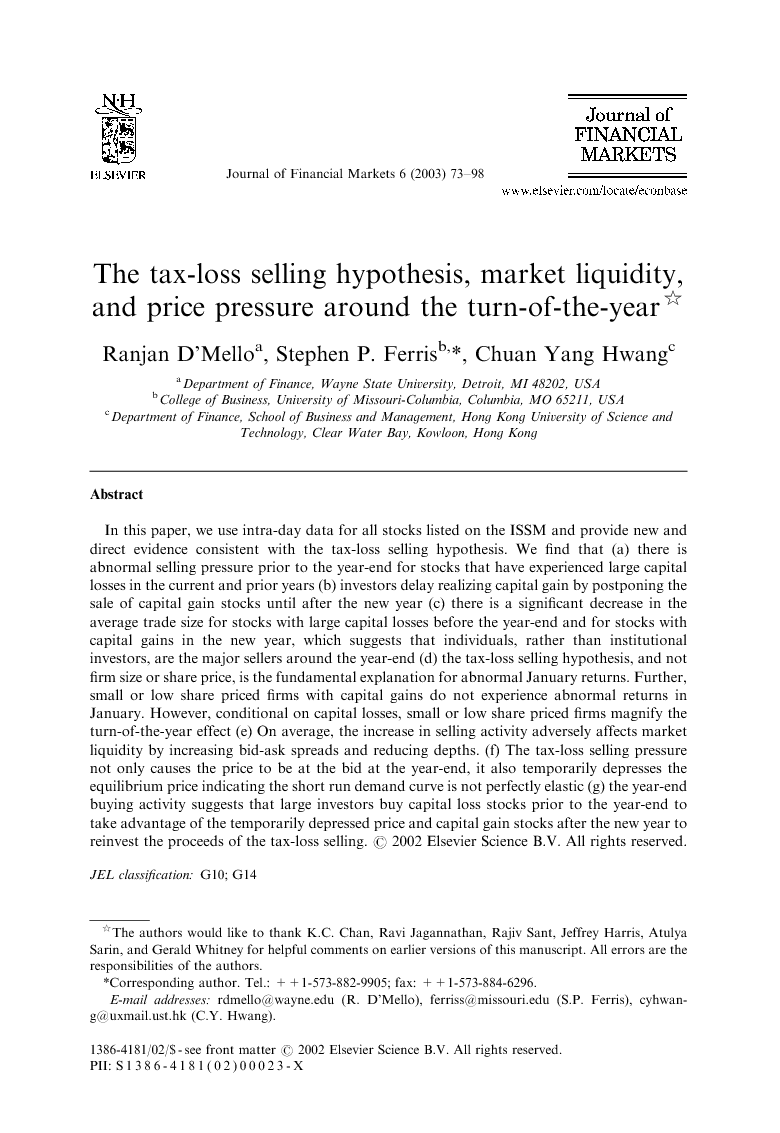 In this paper, we use intra-day data for all stocks listed on the ISSM and provide new and direct evidence consistent with the tax-loss selling hypothesis. We find that (a) there is abnormal selling pressure prior to the year-end for stocks that have experienced large capital losses in the current and prior years (b) investors delay realizing capital gain by postponing the sale of capital gain stocks until after the new year (c) there is a significant decrease in the average trade size for stocks with large capital losses before the year-end and for stocks with capital gains in the new year, which suggests that individuals, rather than institutional investors, are the major sellers around the year-end (d) the tax-loss selling hypothesis, and not firm size or share price, is the fundamental explanation for abnormal January returns. Further, small or low share priced firms with capital gains do not experience abnormal returns in January. However, conditional on capital losses, small or low share priced firms magnify the turn-of-the-year effect (e) On average, the increase in selling activity adversely affects market liquidity by increasing bid-ask spreads and reducing depths. (f) The tax-loss selling pressure not only causes the price to be at the bid at the year-end, it also temporarily depresses the equilibrium price indicating the short run demand curve is not perfectly elastic (g) the year-end buying activity suggests that large investors buy capital loss stocks prior to the year-end to take advantage of the temporarily depressed price and capital gain stocks after the new year to reinvest the proceeds of the tax-loss selling.

This studypresents a comprehensive test of the implications of the tax-loss selling hypothesis by analyzing transaction data over a 6-year sample period and provides new and direct results consistent with that hypothesis. We find an abnormal increase in selling activityprior to the year-end for firms that have experienced a decline in share price over the year. The abnormal selling pressure for these stocks disappears in January. For firms with capital gains however, we observe abnormal selling activityin the new year. This is consistent with the fundamental implication of the tax-loss selling hypothesis that investors who are motivated to reduce their tax liabilities, sell capital loss stocks prior to the year-end to realize losses and then delay the sale of capital gains stocks until the new year to postpone the recognition of capital gains. An examination of trading activityof stocks with short-term and long- term losses is also consistent with the implications of the tax-loss selling hypothesis. We also test to see if the trading pattern observed in Januarymight be explained byinstitutional window-dressing rather than individual tax-loss trading. We find a reduction in the average size of sell side transactions during the turn-of-the-year period. Since individual investors are more capital constrained than institutions and hence are more likelyto trade in smaller lots, we conclude similar to Griffiths and White (1993), Sias and Starks (1997), and Poterba and Weisbenner (1998), that individual investors dominate year-end trading. This studyalso makes a significant contribution in explaining the well- documented January anomaly. We find that the tax-loss selling hypothesis, as opposed to firm size or share price effects, is the primaryexplanation for the January anomaly. Firm size/share price become significant only when theyare interacted with measures of tax-loss potential, implying that for stocks with capital losses, smaller firm size (lower share price) will magnifythe turn-of-the-year effect. We find no evidence that small/low price firms with capital gains earn significantlyhigher returns than large/high price firms. Further, this study examines the impact of year-end trading on market liquidity. Overall, we find an increase in bid-ask spreads and a decrease in market depth at year-end, suggesting that tax-loss trading has an adverse effect on market liquidity. For firms with the largest tax-loss potential, however, we observe an increase in bid- depth but this increase is insufficient to satisfythe increased trading volume motivated bytax-loss selling. This causes a decline in relative liquidityfor these firms that amplifies the tax-loss selling effect. Further, because this insufficiencyis mostsevere for small firms, these firms experience the largest turn-of-the-year effect. These findings provide a microstructure explanation to Schultz’s (1985) question as to why small firms have a greater tax-loss effect than large firms. This paper also examines the presence of price pressure effects produced bytax- loss trading. We find that the non-information based selling at year-end temporarily depresses equilibrium equityprices even after controlling for bid-ask bounce. This finding suggests that stocks are not perfect substitutes for one another and consequentlythat the short-run demand curve for equityis not perfectlyelastic. Similar to Harris and Gurel (1986) and Shleifer (1986), we conclude that price pressure is present in the capital market. However, an investor cannot systematically earn meaningful economic returns after controlling for transaction costs from a strategyof buying tax-loss candidate at year-end and selling them at the beginning of the new year. Finally, this paper provides insights into the nature of trading behavior over the year-end period. Consistent with Roll’s (1983) conjecture, we find abnormal buying activityof capital-loss stocks byinstitutional investors reflecting an attempt to exploit temporaryprice depressions. Further, we find an increase in buying activity subsequent to the new year, which supports Ritter’s ‘‘parking the proceeds’’ hypothesis but the abnormal buying seems to be concentrated in stocks with capital gains