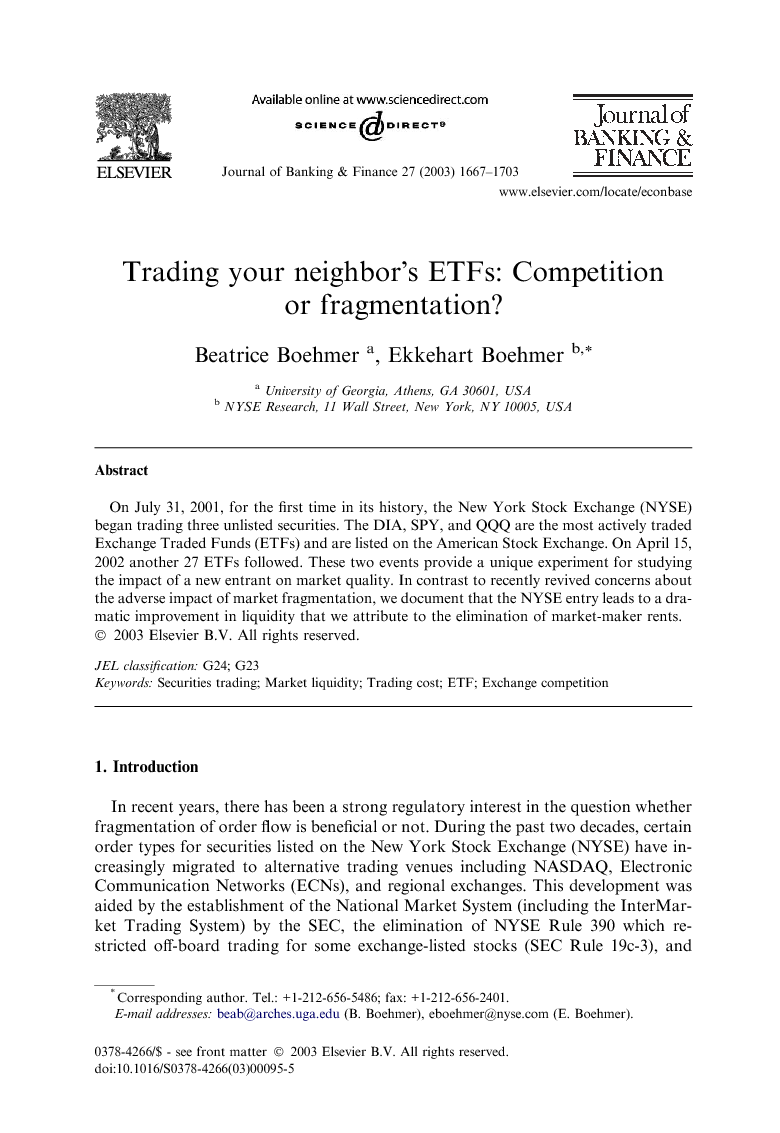 On July 31, 2001, for the first time in its history, the New York Stock Exchange (NYSE) began trading three unlisted securities. The DIA, SPY, and QQQ are the most actively traded Exchange Traded Funds (ETFs) and are listed on the American Stock Exchange. On April 15, 2002 another 27 ETFs followed. These two events provide a unique experiment for studying the impact of a new entrant on market quality. In contrast to recently revived concerns about the adverse impact of market fragmentation, we document that the NYSE entry leads to a dramatic improvement in liquidity that we attribute to the elimination of market-maker rents.

In this paper, we study the impact of the NYSE entry into the trading of 30 AMEX-listed ETFs. These securities previously traded primarily on AMEX, the Nasdaq InterMarket, Island, and several regional exchanges. The NYSE gained an average market share exceeding 10% of overall trading volume during the monthafter its entry. This volume appears to be primarily drawn away from AMEX, mostly in large trade sizes above 10,000 shares. We document double-digit percentage declines in quoted, effective, and realized spreads after the NYSE entry. The difference between effective and realized spread, an approximation for the permanent price impact of a trade and another aspect of liquidity, also decreases significantly. At the same time, quoted depth increases be- tween 68% and 569%, depending on the market center and the ETF. The NYSE entry considerably improves liquidity in the entire market and also in the individual market centers. We conduct detailed tests documenting that this result is not due to shifts in informed trading or a temporary phenomenon. In light of the similar trading protocols on AMEX and the NYSE, several studies that document increased competition on Nasdaq after the OHR were implemented in 1997, and additional competition by other exchanges, ECNs, and limit order traders, it is difficult to reconcile our finding with a competitive market before the NYSE entry. In particular, our analysis of spread components suggests that market-maker rents constitute the component of trading cost that experienced the greatest dollar de- cline after the NYSE entry. How could rents exist in the pre-UTP market? Bessem- binder (2002) argues that payment for order flow implies an agency problem in routing orders, and hence increased rents. As UTP trading started in the wake of dec- imalization, which likely reduced the profitability of payment for order flow, NYSE entry may have triggered a decline in this practice and promoted quote competition. As an alternative to the rent explanation, another hypothesis may also explain the decline in trading cost. It rests on the assumption that different market centers have comparative advantages with certain order types. For example, one market may be better able to handle a large volume of small, uninformed orders, because it has a low-cost execution and screening mechanism. Another market may be better able to handle a high volume of large orders, because it has a deeper pool of liquidity. Under this view, the NYSE entry may have led to a more efficient allocation of or- ders to the respective lowest-cost market center, such that all markets are able to offer lower trading costs. Harris (1993) suggests that segmentation of markets, which is not the same as fragmentation, improves service. We have shown that the NYSE has attracted an over-proportionate share of large and presumably more difficult or- ders. If it were able to execute these orders at lower cost than other market centers, we would expect market-wide trading costs, especially for large orders, to de- crease. 32 This is to some extent consistent with our evidence. However, we also find that market maker rents decline and that Nasdaq approximately maintains its share of informed trading. Furthermore, it is not clear why a market that has a competitive advantage in executing large orders has not an even greater advantage in executing small orders. Yet, we do not observe a whole-scale migration to the NYSE, which attains a market share of below 10%. Thus, the efficiency hypothesis can at besexplain part of the market improvement. To further differentiate this hypothesis from a beneficial increase in competition, it is necessary to observe either the actual cost or profit from market making; we hope that future studies using more compre- hensive data can address this question. Overall, our findings strongly support the view that competition for order flow among market centers is beneficial for overall liquidity and does not seem to ad- versely affect price discovery. While the substantial and growing volume in the ETF market may make the results relevant in their own right, a caveat against gen- eralizing our results is warranted. Our study includes only 30, albeit the most actively traded, ETFs. In addition, ETFs are derivative (‘‘basket’’) securities and their trad- ing characteristics may not generalize to common stocks. Yet, our results suggest that regulation that impedes competition between market centers is not optimal, es- pecially in the context of ETFs. For example, mandatory-display requirements in Regulation ATS and to some extent current ITS rules limit quote competition by let- ting markets free-ride on each other s price discovery. In this context, the SEC s re- cent decision to relax ITS trade-through rules for certain ETFs seems a step in the right direction.