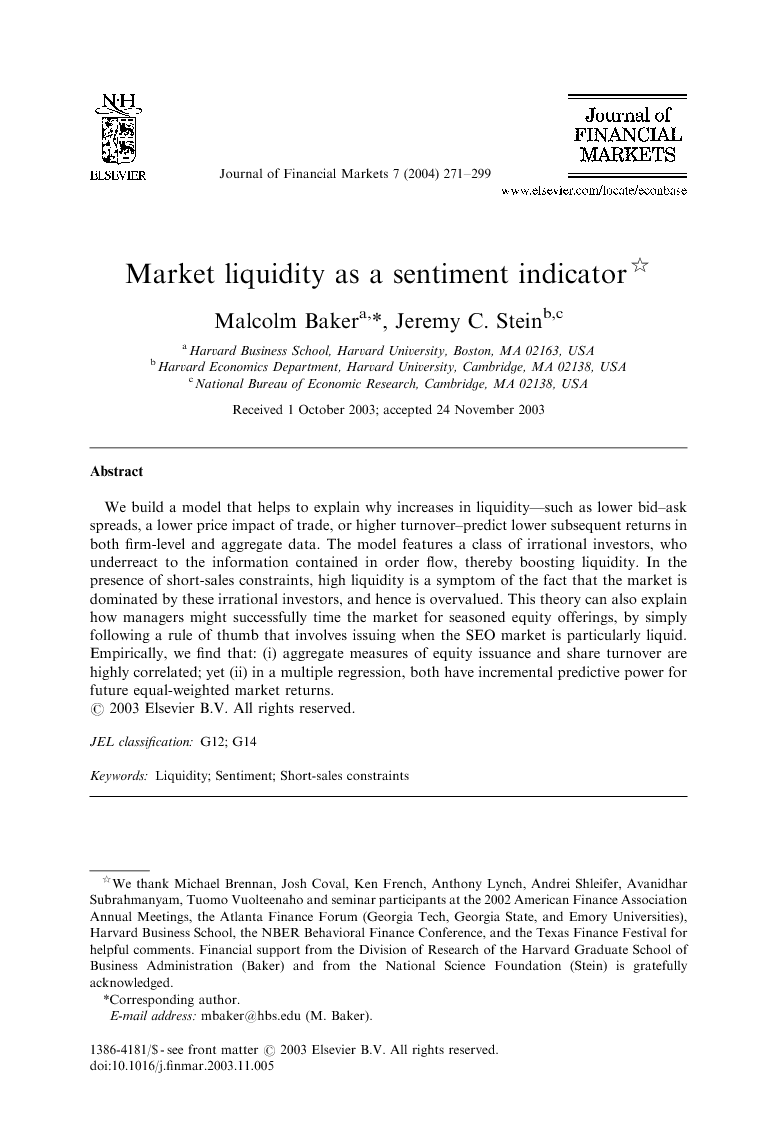 We build a model that helps to explain why increases in liquidity—such as lower bid–ask spreads, a lower price impact of trade, or higher turnover–predict lower subsequent returns in both firm-level and aggregate data. The model features a class of irrational investors, who underreact to the information contained in order flow, thereby boosting liquidity. In the presence of short-sales constraints, high liquidity is a symptom of the fact that the market is dominated by these irrational investors, and hence is overvalued. This theory can also explain how managers might successfully time the market for seasoned equity offerings, by simply following a rule of thumb that involves issuing when the SEO market is particularly liquid. Empirically, we find that: (i) aggregate measures of equity issuance and share turnover are highly correlated; yet (ii) in a multiple regression, both have incremental predictive power for future equal-weighted market returns.

The basic idea of this paper is that, in a world with short-sales constraints, market liquidity can be a sentiment indicator. An unusually liquid market is one in which pricing is being dominated by irrational investors, who tend to underreact to the information embodied in either order flow or equity issues. Thus high liquidity is a sign that the sentiment of these irrational investors is positive, and that expected returns are therefore abnormally low. The model we have used to formalize this idea is admittedly very simplistic. For example, it lacks any real dynamic element, and hence cannot speak to issues such as the horizon over which return predictability plays itself out. The model also requires—in addition to the short-sales constraints—a strong assumption, namely that the same investors who are subject to sentiment swings are also the most prone to underreact to certain kinds of subtle news. While one can appeal to a variety of a priori arguments and experimental evidence to motivate the plausibility of this assumption, we believe that our use of it is ultimately best defended on the grounds of the explanatory mileage that it yields. In particular, the model is able to provide a unified explanation for a wide range of liquidity-related phenomena in stock markets. Many of the individual findings— from the return-forecasting power of measures of trading activity and trading costs, to the new issues puzzle and the existence of hot issue markets—have heretofore been rationalized separately, each with a story of its own. But as our preliminary empirical work suggests, these facts are intimately related to one another. So it is natural to want to be able to understand them within the context of a single conceptual framework. This paper has been a first attempt at developing such a framework; it would seem that there is room for much more to be done in this vein. Ranging further afield, one might ask whether our liquidity-as-sentiment approach can also shed some light on the workings of other, more ‘‘real’’ asset markets, such as those for physical corporate assets or for houses. Many of these real markets are also characterized by a strong link between prices and measures of both trading volume and liquidity. This link has been studied by Shleifer and Vishny (1992) , Stein (1995) , and Pulvino (1998) , all of whom assume rational investors and emphasize instead the roles of borrowing constraints and asset specificity. But perhaps investor sentiment also has some part to play in explaining the joint behavior of prices and liquidity in these other types of asset markets. 30 It would be interesting to develop this conjecture more completely, and to see whether it yields any novel empirical predictions