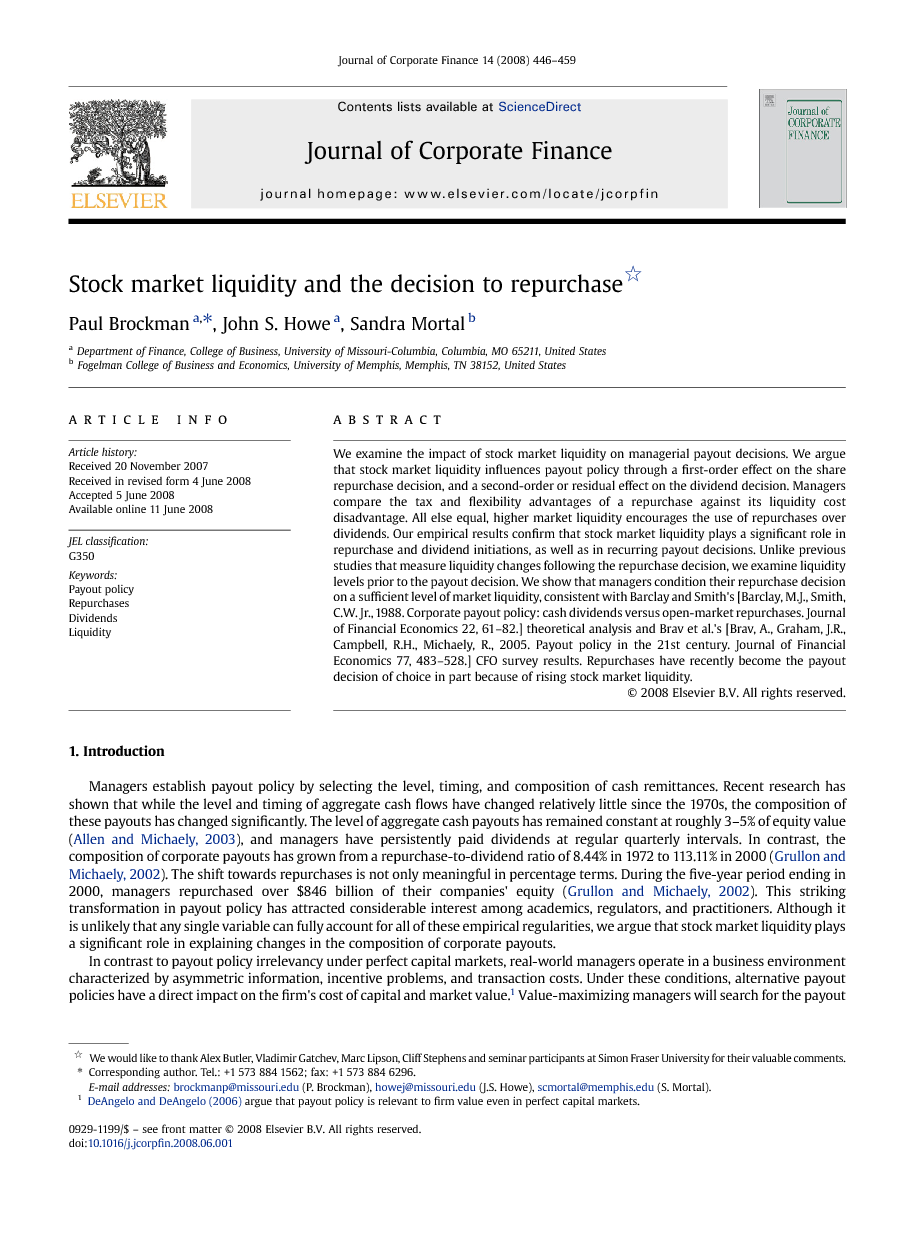 We hypothesize that stock market liquidity affects corporate payout policy primarily through its in fl uence on the decision to repurchase. Our liquidity hypothesis of repurchases is consistent with Barclay and Smith's (1988) theoretical framework as well as with Brav et al.'s (2005) survey and interview results. Managers prefer repurchases over dividends because of tax and fl exibility advantages, although their ability to conduct repurchases is subject to various constraints. Prior to the enactment of safe harbor Rule 10b-18, managers were constrained by uncertainty about charges of price manipulation. Repurchase activity increased signi fi cantly after this regulatory constraint was lifted by the SEC's ruling in 1982. We argue that stock market liquidity directly impacts the repurchase decision and, through the substitution effect, indirectly impacts the dividend decision. Our empirical results con fi rm that managers use stock market liquidity as a decision variable in setting payout policies. We divide our results into two sections corresponding to payout initiation decisions and ongoing payout decisions. We fi nd that repurchase-initiating fi rms are signi fi cantly more liquid than non-initiating fi rms, and that dividend-initiating fi rms are generally less liquid than non-initiating fi rms. The repurchase-initiating results are stronger than their dividend-initiation counterparts, as hypothesized. We con fi rm parallel patterns for ongoing payouts. We show that the size of the repurchase increases signi fi cantly with the market liquidity of the repurchasing fi rm. These repurchase results are signi fi cant for every measure of market liquidity. We fi nd that the size of the dividend generally decreases with the liquidity of the dividend-paying fi rm, although these dividend results are considerably weaker than their repurchase counterparts, both in terms of statistical and economic signi fi cance. Similar to our initiation fi ndings, stock market liquidity has a fi rst-order effect on the repurchase decision and a weaker, residual effect on the dividend decision. Overall, our payout initiation and ongoing payout results provide considerable support for the liquidity hypothesis of repurchases. In addition to connecting market microstructure to corporate fi nance, our study contributes to a coherent picture of corporate payout policy that is currently emerging from the literature. Fama and French (2001) show that dividend policy has changed substantially since the 1970s, and that these changes cannot be fully attributed to fi rm characteristics. DeAngelo et al. (2004) con fi rm that there has been a downward shift in the percentage of fi rms that pay dividends, in spite of the fact that total dividend payouts have continued to increase since the 1970s. Grullon and Michaely (2002) , among others, document the secular rise in share repurchases over this same time period. Given the evidence that managers have been substituting repurchases fordividends, the next step is to examine the underlying causes of this substitution effect. Skinner (2008) shows that two groups of payers have emerged since the 1980s: fi rms that use repurchases exclusively, and fi rms that use repurchases and dividends combined. The latter group consists of well-established, mature fi rms that have been paying dividends for a number of years. Managers of these fi rms are reluctant to cut dividends because of perceived “ negative consequences ” ( Brav et al., 2005 ), but they use repurchases for payout increases if there is suf fi cient liquidity. Stock market liquidity determines the extent of the substitution effect for mature, dividend-paying fi rms. For the former group of repurchase- only fi rms, stock market liquidity plays an even more pervasive role since their entire payout depends on liquidity thresholds. When payout opportunities arise, these managers will choose repurchases as long as there is suf fi cient liquidity.