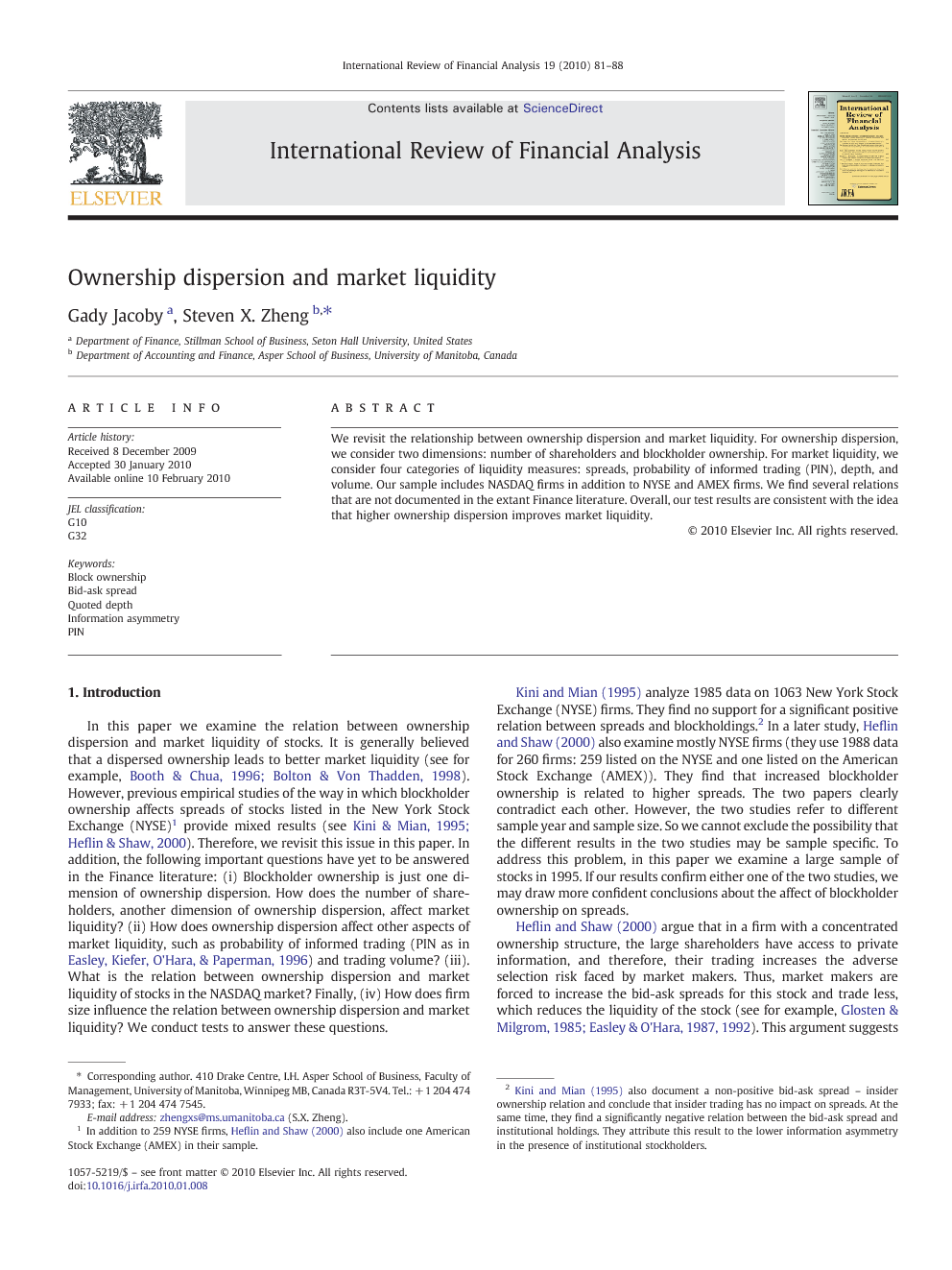 In this paper, we revisit the relation between ownership dispersion and fi rm market liquidity. In agreement with He fl in and Shaw (2000) , we show that for a sample of NYSE/AMEX stocks higher block ownership hurts measures of stock liquidity. Unique to our paper, we extend our tests to a large sample of Nasdaq stocks to examine the above relation. We show that, unlike the results for NYSE/AMEX stocks obtained in He fl in and Shaw (2000) and in the current study, for Nasdaq stocks, dealers do not adjust quoted depth in response to increased blockholder concentration.We demonstrate that this result is sensitive to fi rm size. For small NYSE and AMEX stocks, with fi rm size in the vicinity of that of Nasdaq stocks, quoted depth is still unrelated to blockholdings, while for large NYSE/AMEX stocks the results suggest that market makers adjust their quoted depth to changes in blockholdings. He fl in and Shaw (2000) and Kini and Mian (1995) use the ratio of shares held by blockholdings as the sole dimension of ownership dispersion. We demonstrate that blockholder ratio can be a poor measure of ownership dispersion when considered exclusively. We motivate and offer the number of shareholders as an additional measure. In our investigation we fi nd this two-dimensional treatment of ownership dispersion very useful. When block ownership is used as the sole measure for ownership dispersion, we sometimes fi nd that stock liquidity is not related to ownership dispersion. However, when the number of shareholders is used together with block ownership to proxy ownership dispersion, we fi nd that, consistent with our prediction, greater ownership dispersion improves stock liquidity. Theory suggests that the higher probability of informed trading that exists for fi rms with concentrated ownership motivates market makers to charge higher spreads and trade less. Thus, we directlystudy this theoretical prediction by estimating the relation between ownership dispersion and PIN. We fi nd strong support for the above theoretical prediction: a higher PIN for stocks with more concentrated ownership for all samples. Finally, unique to this study, we add dollar trading volume to our analysis as an additional proxy for liquidity. This innovation follows priorresearchthatarguesthatdollartradingvolumemaybeasuperior measure of liquidity than the bid-ask spread. As expected, we fi nd our ownership concentration variables have an adverse impact on trading volume. Overall, the results in this paper support the notion that a dispersed ownership structure improves market liquidity.