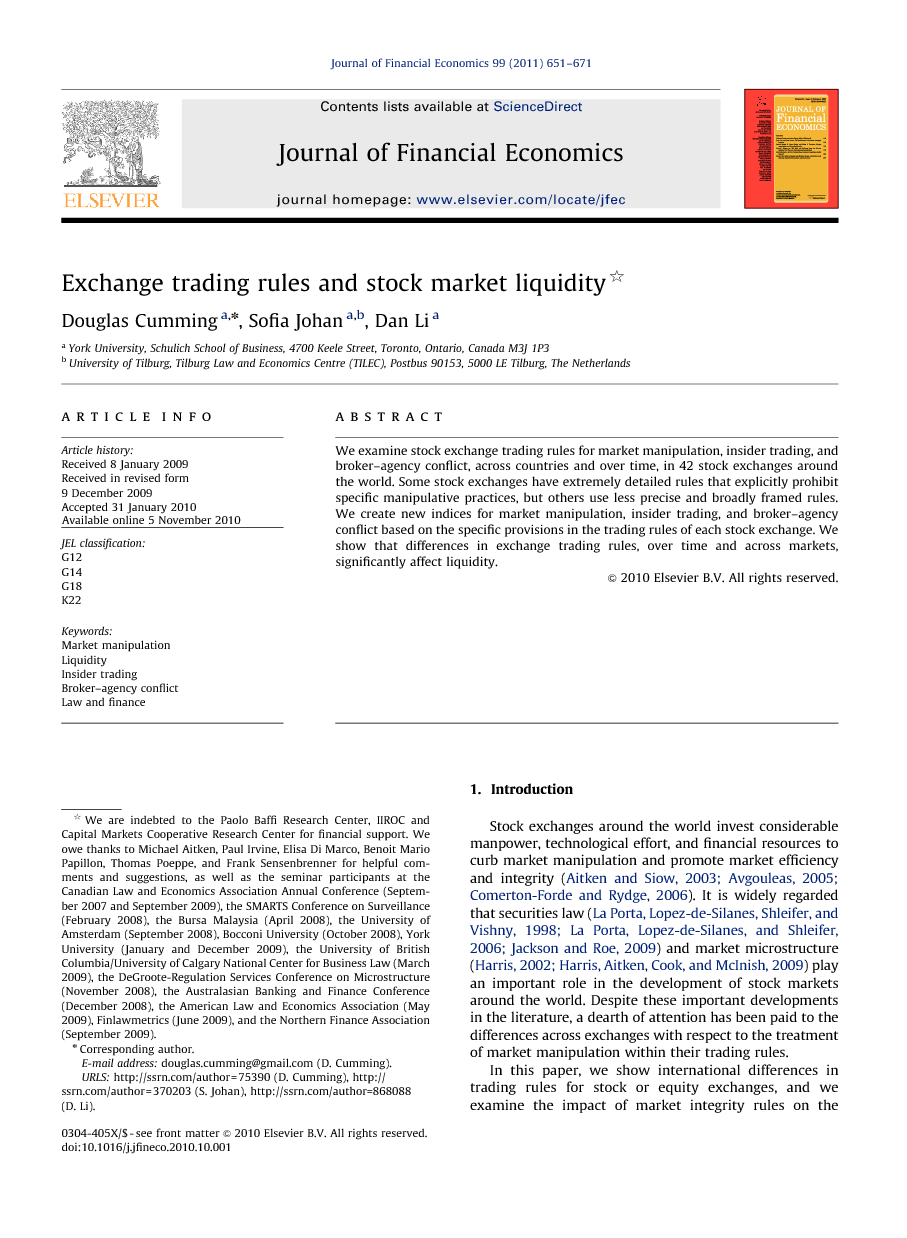 In this paper, we contribute to the literature on international differences in stock exchanges by examining the effect of trading rules on liquidity as represented by velocity, volatility, and bid-ask spread. Building on prior work on mandatory disclosure and delegation between private and public enforcement of securities laws ( La Porta, Lopez-de-Silanes, and Shleifer, 2006; Hail and Leuz, 2006; Jackson and Roe, 2009 ) and surveillance technology and information sharing in ex post enforcement ( Cum- ming and Johan, 2008 ), we consider the interaction between rule specificity in stock exchange trading rules and stock exchange trading activity.We employ a sample of 42 exchanges around the world and find that stock exchange trading activity is most closely related to trading rules specificity in regard to insider trading and market manipulation but is not statistically related to rules pertaining to broker–agency conflict. The reasoning behind this finding is that insider trading and market manipulation rules provide clarity regarding prohibited manipulative trading practices and are of direct and central importance to the conduct of market participants. By contrast, broker–agency conflict rules are typically subject to extraneous rules from governing bodies and professional associations for brokers (such as the Chartered Financial Analysts Institute). The connection between trading activity and insider trading and market manipulation rules is robust to concerns about endogeneity, difference-in-differences specifica- tions, and alternative control variables. Specifically, we observe the material impact of the MiFID rule changes on all dimensions of liquidity. Although it is difficult to isolate precisely the components of trading rules that matter the most, it is noteworthy that we do observe a close connection between the Volume Manipulation Rules Index and trading velocity, the Price Manipulation Rules Index and volatility, and the Insider Trading Rules Index and bid-ask spreads. The results indicate trading rules are an important source of information to consider in explaining the differences in trading activity among stock exchanges around the world. Future work could look to the exchange trading rules as a source of international differences in stock exchange efficiency and integrity