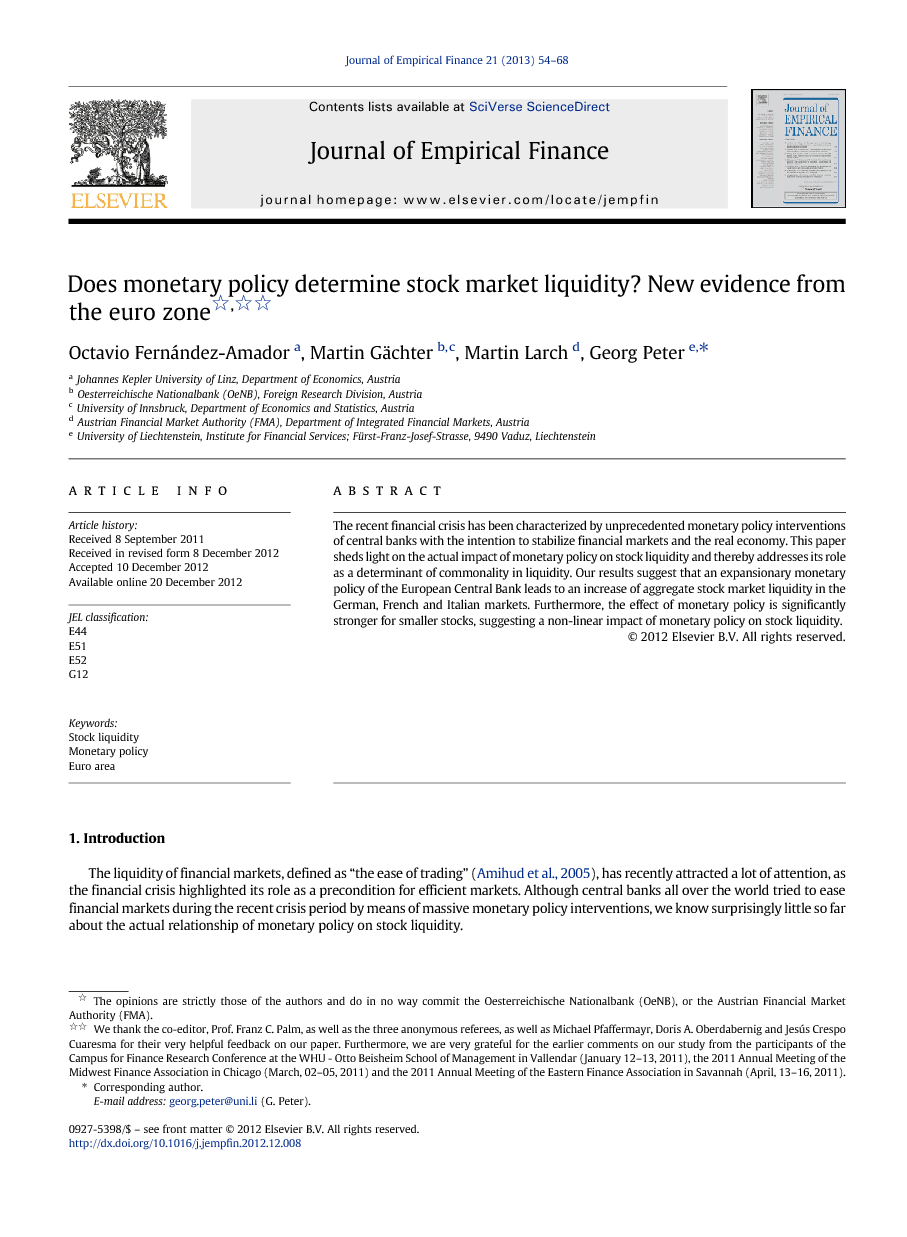 This study sheds light on the role of monetary policy as a potential determinant of stock liquidity. We examine whether an expansionary (restrictive) monetary policy of the ECB increases (decreases) the liquidity of stocks both at the macro and micro level for the Xetra trading system, Euronext Paris and Milan stock exchange. In order to measure (il)liquidity we employ seven variablesthatcapturetheaspectstradingactivity,priceimpactandtransactioncosts.ThemonetarypolicyoftheECBisapproximatedeitherby the twelve-month growth rate of the monetary base or by the EONIA. Our findings can be summarized as follows. Firstly, to examine the relationship between monetary policy and aggregated market liquidity we use VAR models in order to take potential endogeneities into account. The Granger-causality tests favor the conclusion that the central bank policy causes stock market liquidity, while evidence for a reversed relationship is rather weak. These observations are consistent with the fact that the ECB clearly focuses on price stability, thereby being less activist with regard to other objectives. The estimatedimpulse response functi ons confirm that an expansionary monetary policy entails more liquid stock markets. Most signs of the responses of the aggregated market (il)liquidity measures after a shock in the monetary policy variables are well in line with our hypotheses, though those for a shock to the EONIA are in general not statistically significant. Secondly, we complement the macro analysis by means of panel estimations with stock-fixed effects a nd find that an expansionary (restrictive) monetary policy also significantly leads to an increase (decrease) in the liquidity of individual stocks. Interestingly, we find that individual stock characteristics like market capitalization, which have not been considered by prior research, indeed play a role in the relationship. In general, smaller firms seem to be more responsive to liquidity effects of monetary policy. This observation is in line with a scenario in which monetary policyaffectsfundingcostsoffirms.Especiallyinthecontextofbank-dependentsystemslikethoseoftheeuroarea,monetarypolicymay impact stock fundamentals through an increase in the cost of bank financing. Our results thus highlight the importance of considering severalmeasurescapturingdifferentaspectsoftheconceptofliquidityandmonetarypolicyvariables.Moreover,monetaryinterventions of central banks should be considered as a determinant of individual stock liquidity, which may help to explain observed commonality in liquidity, as well as variations in liquidity at the aggregated-market level. Our study leaves several doors open to further research. From a methodological point of view, the issue of cross-sectional homogeneity of the slope parameters in the panel models has to be investigated and tested in future work, as assuming fixed effects and including an interaction of monetary policy and market capitalization of stocks in our panel estimations might not be sufficient to account for all potential forms of cross-sectional heterogeneity. Furthermore, a content-related extension could, for instance, take the bond market into consideration. The impact of central bank policies on bond markets seems rather obvious due to open market operations and other monetary policy instruments. Moreover, as suggested by Keynesian arguments, the final effect of monetary policy on liquidity depends on the relative attractiveness of other asset markets (i.e. the bond market). A tightening (easing) of the monetary policy would for instance make bonds relatively more attractive compared to equities and part of the effect of monetary policy on stock market liquidity would be channeled through the bond market (flight-to-quality or flight-to-liquidity episodes). Noteworthy, existing literature supports this conclusion, as shown by Goyenko and Ukhov (2009) .In this respect, it should be noted that this effect does not change the causation direction observed in our study (from monetary policy to stock market liquidity), but solely concerns the transmission mechanism of monetary policy shocks to the stock market (potentially also through the bond market). Moreover, studying cross-market information could also turn out to be an interesting research question. Specifically, information across countries could play a role in determining to what extent co-movements towards low-liquidity levels across countries (for example in periods of global crisis) would determine the conduct of common monetary policy in the euro area. Such an extension would add information about a potential reverse causality in those periods