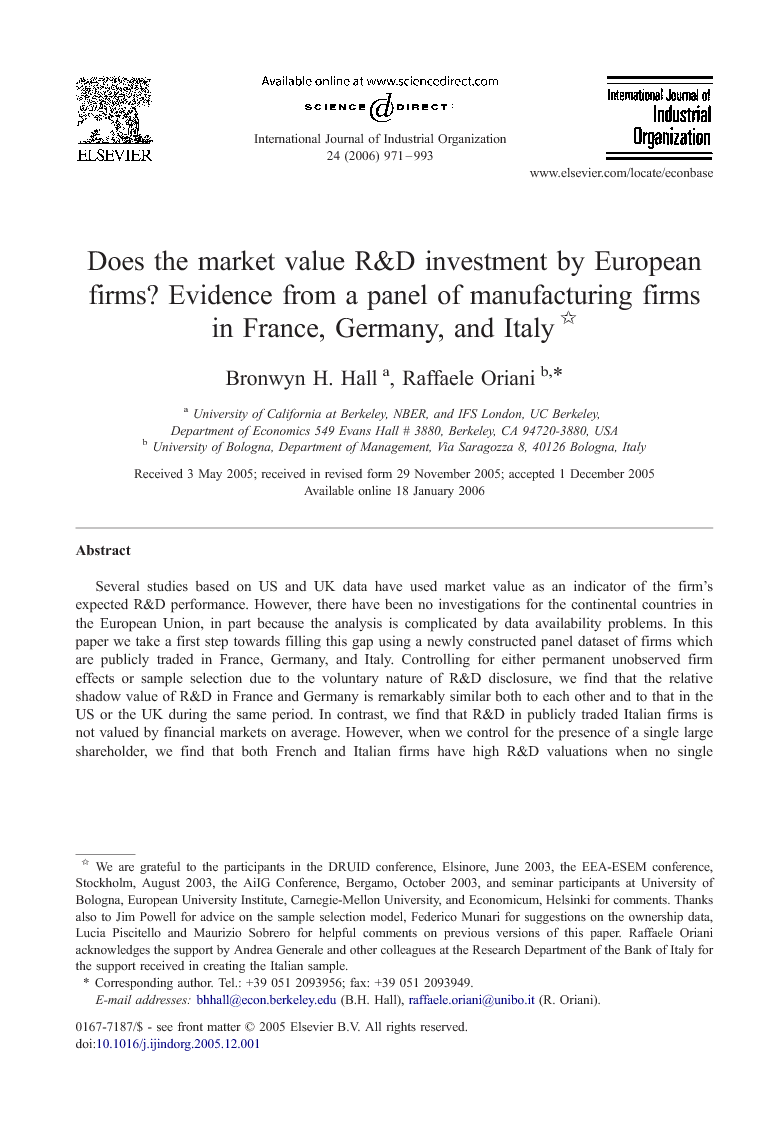 Several studies based on US and UK data have used market value as an indicator of the firm's expected R&D performance. However, there have been no investigations for the continental countries in the European Union, in part because the analysis is complicated by data availability problems. In this paper we take a first step towards filling this gap using a newly constructed panel dataset of firms which are publicly traded in France, Germany, and Italy. Controlling for either permanent unobserved firm effects or sample selection due to the voluntary nature of R&D disclosure, we find that the relative shadow value of R&D in France and Germany is remarkably similar both to each other and to that in the US or the UK during the same period. In contrast, we find that R&D in publicly traded Italian firms is not valued by financial markets on average. However, when we control for the presence of a single large shareholder, we find that both French and Italian firms have high R&D valuations when no single shareholder holds more than one third of the firm, but that R&D is essentially not valued at all in the remaining firms.

The question of how R&D investment affects the performance of the firm is of considerable interest to economists and other researchers. A number of empirical studies, beginning with the seminal contribution of Griliches (1981) and based on US firm-level data from the Compustat database, have used market value as an indicator of the firm's expected economic results from investing in R&D (among others, Hirschey, 1982, Jaffe, 1986, Cockburn and Griliches, 1988, Hall, 1993a and Hall, 1993b).1 These analyses generally show a positive relationship between R&D investments and the market value of the firm, even though the R&D coefficient is volatile between and even within studies.2 Recent analyses in the same spirit conducted for the UK (Blundell et al., 1999 and Toivanen et al., 2002) have also found a positive relationship between R&D investments and the market value of the firm. However, to our knowledge there have been no investigations into this subject for other countries in the European Union, including G8 economies such as France, Germany, and Italy. Lack of such studies is unfortunate because these countries are different in several important ways from Anglo-Saxon countries. First, a lower presence of professional investors and a relatively looser discipline exerted by public stock markets may lead firms in the continental European countries to have a higher propensity for long-term investments, due to the lack of pressure for quarterly results imposed by financial capital markets. Previous work has shown, for example, how financial constraints on firms' R&D and capital investments are looser in continental European countries than in the UK and the US (Hall et al., 1999, Mulkay et al., 2000 and Bond et al., 2003a). These differences could have important implications for the market valuation of R&D investments, implying that we might obtain different results for French, German and Italian firms when compared to those available for UK and US firms.

In this section we discuss the results obtained by the estimation of the models reviewed in Section 3. Because the focus of this paper is on the hitherto unstudied R&D–market value relationship in France, Germany and Italy, we begin by reporting the results of OLS and NLLS regressions for these countries and comparing them to results for the United States and the United Kingdom. We then focus on the effect of control by a major shareholder on the market valuation of R&D. Finally, we explore the robustness of our results in two ways. We first investigate the presence of sample selection bias in our estimates, finding that it is negligible provided we control for differences in the ownership structures of continental firms versus those from the Anglo-Saxon economies. Based on this result, we turn our attention to the estimates that control for left-out firm effects.