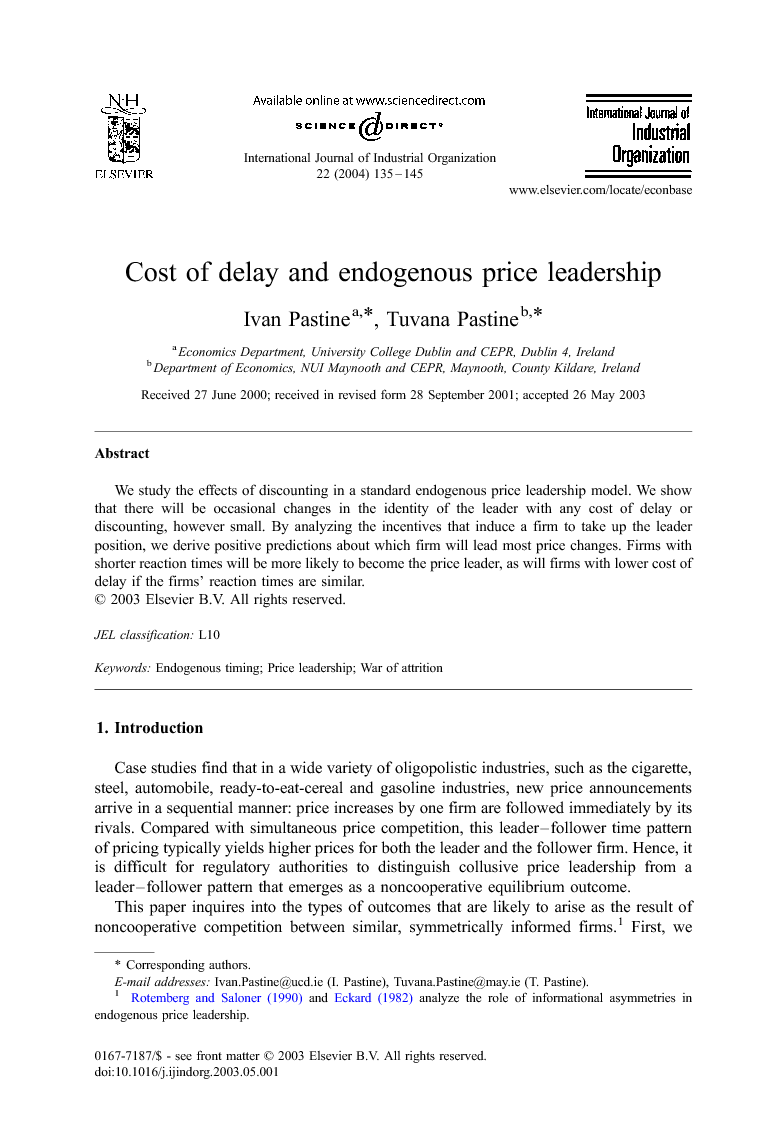 We study the effects of discounting in a standard endogenous price leadership model. We show that there will be occasional changes in the identity of the leader with any cost of delay or discounting, however small. By analyzing the incentives that induce a firm to take up the leader position, we derive positive predictions about which firm will lead most price changes. Firms with shorter reaction times will be more likely to become the price leader, as will firms with lower cost of delay if the firms' reaction times are similar.

Case studies find that in a wide variety of oligopolistic industries, such as the cigarette, steel, automobile, ready-to-eat-cereal and gasoline industries, new price announcements arrive in a sequential manner: price increases by one firm are followed immediately by its rivals. Compared with simultaneous price competition, this leader–follower time pattern of pricing typically yields higher prices for both the leader and the follower firm. Hence, it is difficult for regulatory authorities to distinguish collusive price leadership from a leader–follower pattern that emerges as a noncooperative equilibrium outcome. This paper inquires into the types of outcomes that are likely to arise as the result of noncooperative competition between similar, symmetrically informed firms.1 First, we show that in such industries, there will be occasional changes in the identity of the price leader. A leader–follower pattern where a single firm consistently leads all price changes is unlikely if firms face a cost of delay in their price announcements. Secondly, by analyzing the incentives that induce a firm to take up the leader position, we derive positive predictions about which firm will lead most price changes. In many industries, empirical studies by Scherer and Ross (1990), Nicholls (1951) and Markham (1951) show that the identity of the leader tends to vary. One of the “distinguishing characteristics” of price leadership in industries that do not have a dominant firm is occasional changes in the identity of the leader firm (Scherer and Ross, 1990, p. 249). For instance, in the US cigarette industry from 1923 to 1941, there were eight standard brand price changes. While Reynolds lead six of these price changes, American led the other two price changes. In the 1960s steel industry, price leadership passed from one company to another with price changes being announced in different product lines. Markham (1951) reports that in the newsprint industry, while International Paper led most price changes in markets east of the Rocky Mountains, it did not lead all of the price changes. Likewise, Crown Zellerbach has usually announced new prices on the West Coast, but its rivals lead some price changes as well. There is a line of research which derives predictions about which firm will become the price leader. Among these, Van Damme and Hurkens (1998) show that an equilibrium refinement (risk dominance) will pick the low-cost firm as the price leader no matter how similar the firms might be, as long as they are not identical. In Deneckere and Kovenock (1992) and Deneckere et al. (1992), differences in capacity constraints and brand loyalty can generate an endogenous price leader as a result of a pure-strategy equilibrium. The findings of our paper, on the other hand, predict occasional changes in the identity of the leader. The reasons for the difference in these predictions are twofold: we explicitly incorporate a cost of delay in price announcements and we allow the firms to act whenever they wish. When firms are restricted in the timing of their moves, such that in odd periods one firm can announce price and in even periods the other firm can announce price, Deneckere and Kovenock (1992) and Deneckere et al. (1992) show that the high capacity firm and/or the firm with a greater brand-loyal group of consumers will emerge as the endogenous price leader. However, as also noted in Deneckere and Kovenock (1992), relaxing the restriction on the timing of the moves such that each firm can move in any period, endogenous price leadership as a pure-strategy equilibrium outcome disappears when firms discount the future. Our framework extends the endogenous leadership discussion by examining the nature of the competition under these circumstances. We argue that a cost of delay in price announcement may play an important role in firms' strategic pricing decisions. A firm can collect sales receipts at the new prices only after having announced its price. Hence, a delay in the price announcement will inevitably result in delayed and, therefore, discounted profits for the firm. When firms incur any cost of delay in price announcements, however small, a leader–follower pattern cannot emerge as a result of a pure-strategy Nash equilibrium. Hence, we examine the mixed-strategy equilibria. In price competition, the mixed-strategy equilibrium is a war of attrition. Due to the basic conflict over role selection, firms struggle to capture the advantageous follower position. In the war of attrition, asymmetries between the firms translate into asymmetric probabilities of leading. Therefore, while one firm might lead many price changes, the same firm will not lead all price changes.

This paper analyzes the types of leader–follower outcomes that are likely to arise as the result of noncooperative competition between similar, symmetrically informed duopolistic firms. If firms have any cost of delay, however small, all pure-strategy equilibria involve simultaneous price announcements. However, when we allow firms to announce their prices whenever they like there exists an equilibrium where both firms mix over the timing of their moves and a leader–follower pattern in pricing may be observed. This mixed-strategy equilibrium is a war of attrition, since both firms struggle to capture the follower position. If this equilibrium is repeated for successive price changes, the paper predicts occasional changes in the identity of the endogenous price leader. The probabilities that each firm becomes the endogenous price leader are also derived. As early as 1934, von Stackelberg argued that in oligopolistic markets, the conflict between the firms over the leader and follower roles will lead to an unstable market, as firms continually struggle to gain the advantageous position. “A regular trial of strength emerges and no equilibrium position is reached…[The pure-strategy “Stackelberg” leader–follower] equilibrium is unstable, for the passive seller can always take up the struggle again at any time…[E]ach duopolist tries in each case to induce his competitor to adopt another behavior pattern so that he is forced to give in.” (Von Stackelberg, 1952, p. 194). Likewise, in an influential paper, Markham (1951, p. 897) argued that “there are certain visible market features associated with competitive price leadership.…[I]n the absence of conspiracy one would certainly expect occasional changes in the identity of the price leader.” The mixed-strategy equilibrium presented here is in line with the intuitive arguments of von Stackelberg and Markham.