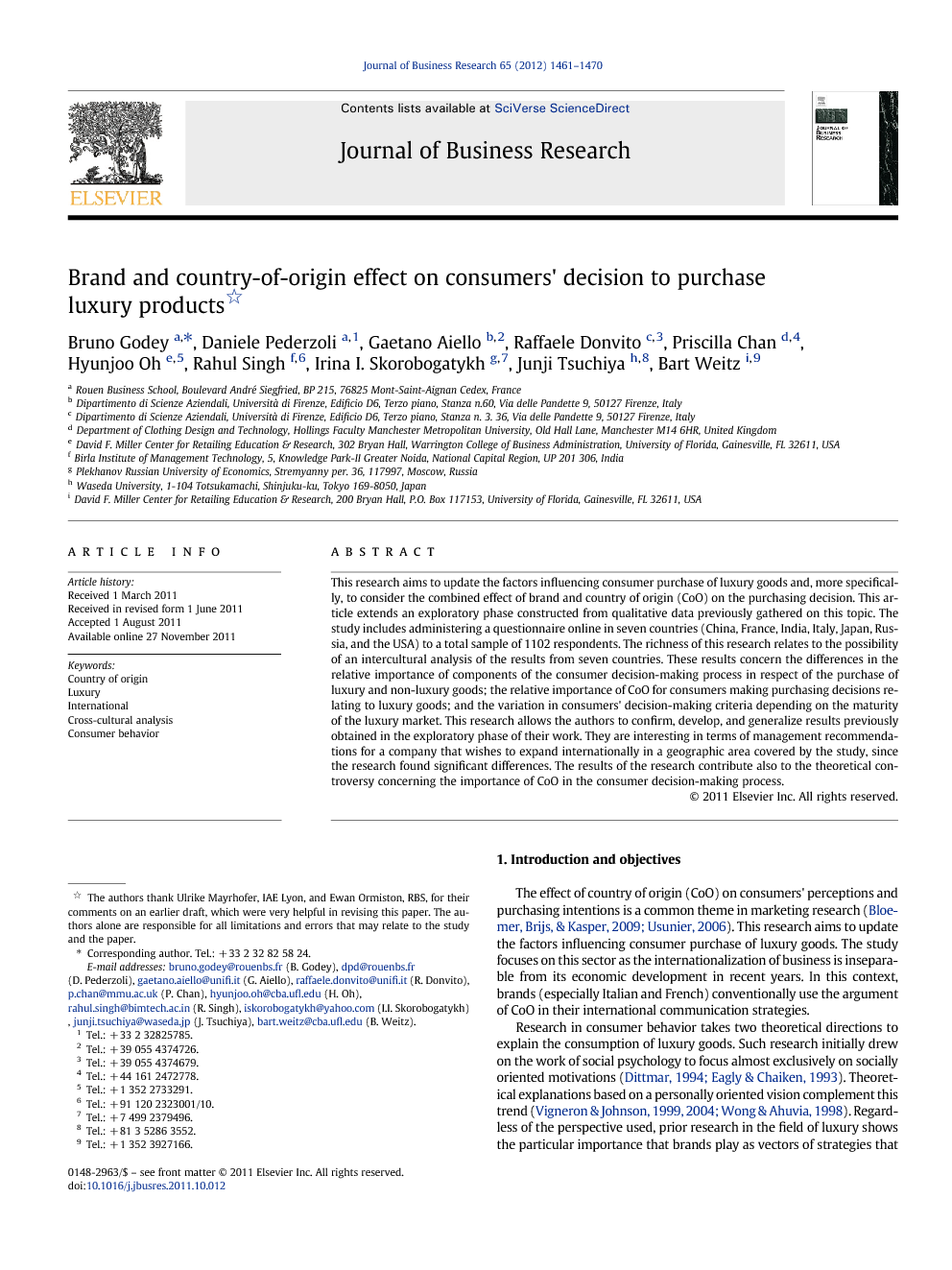 This research aims to update the factors influencing consumer purchase of luxury goods and, more specifically, to consider the combined effect of brand and country of origin (CoO) on the purchasing decision. This article extends an exploratory phase constructed from qualitative data previously gathered on this topic. The study includes administering a questionnaire online in seven countries (China, France, India, Italy, Japan, Russia, and the USA) to a total sample of 1102 respondents. The richness of this research relates to the possibility of an intercultural analysis of the results from seven countries. These results concern the differences in the relative importance of components of the consumer decision-making process in respect of the purchase of luxury and non-luxury goods; the relative importance of CoO for consumers making purchasing decisions relating to luxury goods; and the variation in consumers' decision-making criteria depending on the maturity of the luxury market. This research allows the authors to confirm, develop, and generalize results previously obtained in the exploratory phase of their work. They are interesting in terms of management recommendations for a company that wishes to expand internationally in a geographic area covered by the study, since the research found significant differences. The results of the research contribute also to the theoretical controversy concerning the importance of CoO in the consumer decision-making process.

The effect of country of origin (CoO) on consumers' perceptions and purchasing intentions is a common theme in marketing research (Bloemer et al., 2009 and Usunier, 2006). This research aims to update the factors influencing consumer purchase of luxury goods. The study focuses on this sector as the internationalization of business is inseparable from its economic development in recent years. In this context, brands (especially Italian and French) conventionally use the argument of CoO in their international communication strategies. Research in consumer behavior takes two theoretical directions to explain the consumption of luxury goods. Such research initially drew on the work of social psychology to focus almost exclusively on socially oriented motivations (Dittmar, 1994 and Eagly and Chaiken, 1993). Theoretical explanations based on a personally oriented vision complement this trend (Vigneron and Johnson, 1999, Vigneron and Johnson, 2004 and Wong and Ahuvia, 1998). Regardless of the perspective used, prior research in the field of luxury shows the particular importance that brands play as vectors of strategies that consumers use in their decision-making processes (Dubois et al., 2005, Kapferer, 1997, Kapferer, 1998, Vigneron and Johnson, 1999 and Vigneron and Johnson, 2004). Following the difficulties experienced in 2008–2009 and despite forecasts in return-to-growth in 2010–2011 (for example, Bain et al., 2011), businesses need to make smart strategic choices in international marketing. This research is part of the managerial perspective of improving understanding of the cultural differences in perception and purchasing behavior relating to luxury brands. The study focuses specifically on the configural effects of brand and CoO on the purchasing decisions of consumers. However, the study includes additional elements, such as design, price, and guarantee, which can influence the purchasing decisions of consumers. The choice of these variables depends on the definition of what a luxury brand is. Researchers generally agree about the lack of substantial definitions of luxury, that is to say, definitions based on general intrinsic characteristics of products and techniques employed, or on techno-economic characteristics of the industry (Bomsel, 1995). However, a certain consensus is emerging about the major characteristics that the consumer of luxury brands desires. The common denominators are beauty, rarity, quality, and price, and also an inspirational brand endorsing the product. In this context, brands compete on the basis of their ability to evoke exclusivity, brand identity, brand awareness, and perceived quality for the consumer (Phau & Prendergast, 2000). This article complements an exploratory phase, conducted from qualitative data gathered previously on this subject (Aiello et al., 2009). The wealth of results relates to the intercultural nature of the analysis, based on a questionnaire administered in seven countries (China, France, India, Italy, Japan, Russia, and the USA), with a total sample of 1102 respondents. After describing the conceptual framework and methodology for the study, this paper presents the results. The study firstly characterizes the specificities of the luxury market in terms of decision making, and secondly identifies important elements in this decision. At each stage, the methods chosen allow comparison of the results obtained in the different countries represented in the sample.

The authors intuitively assumed significant differences to exist between homogenous groups of countries according to their level of maturity in the market for luxury goods. However, the situation appears to be more complex and therefore to require a finer distinction between countries. In particular, for countries in the sample where the luxury market is still developing (China, India, and Russia), and so which have a strategic goal to encourage the purchase of luxury goods, consumer behavior is strikingly different from one country to another. Firstly, this research clearly distinguishes those elements that best characterize the luxury sector to consumers. In terms of managerial recommendations, this result is interesting for companies wishing to enter this market, showing them which strategic elements they should rely on to differentiate rapidly. The study identifies four main elements: brand, CoD, design, and CoO. However, refinement of these recommendations is necessary depending on the target location, since the value of the criteria differ significantly between the countries in the sample. Secondly, the study examines the criteria governing the decision to purchase luxury goods. The criteria that companies should emphasize are design, brand, and guarantee. Here again, differences exist between countries. CoO, which does not generally form part of the elements valued by consumers of luxury goods, displays the largest difference between countries. However, consumers in all countries widely recognize brand as a criterion of choice in the purchase of luxury goods. From a managerial point of view, a more precise analysis of the results is interesting. The research forms two groups of countries according to the maturity level of the luxury market. The study analyzes the results of each developed country relative to the group mean, showing that for French consumers, the predominant elements in decision-making are brand, design, and guarantee. However, while brand and guarantee score above the mean for developed countries, design does not. CoO, whether considered overall or in its variations, plays a minor role, receiving a score below the mean for developed countries. Consumers from the USA are very close to the French in the relatively small weighting they give to CoO. Guarantee is also a less-valued criterion compared to the mean of developed countries. In contrast, the criteria of design, brand, and price receive rankings above the mean for developed countries. Italian consumers attach great importance to guarantee and brand. Of all developed countries studied, Italy considers CoO and its variations most, with a score well above the mean of other developed countries on these criteria. In contrast, price appears to be less important as a decision criterion than in other developed countries. Finally, Japanese consumers attach particular importance to price in making purchasing decisions. They also take into account in a very significant way design and CoO, even if the results on these criteria are closer to the mean of developed countries. In contrast, the Japanese are the only consumers in developed countries to attach little importance to brand. As for how specific developing countries compare to the group means, Chinese consumers attach particular importance to price but also to CoO and its variations. They are, however, only just in the group mean for design, brand, and guarantee. Consumers in Russia attach more specific significance to design and CoO dimensions than those in the other two countries in the group. In addition, evaluation of brand and guarantee is very close to that of developed countries. Finally, Indian consumers do not seem to have a very familiar image of luxury goods. They give scores below the group mean and the mean of the total sample for all factors except advertising. Even if brand and design factors generally score more highly than others, Indian consumers attach importance to the factor furthest removed from the product itself. From the academic point of view, this research makes a contribution to previous studies concerning CoO and branding through a multicultural analysis that takes into account seven countries and more than 1000 customers. The results provide a number of responses to the controversy surrounding the importance of CoO in the decision-making process of consumers (Bloemer et al., 2009, Laroche et al., 2005, Papadopoulos and Heslop, 2003 and Usunier, 2006). In the specific case of luxury goods, the study highlights that the impact of CoO is weaker than that of brand. Some other interesting results emerge from the research, especially concerning the possibility of identifying potential country groups based on the analysis variables. The respondents seem to grasp fully the globalization of markets and — especially — of the value chain, from conception and design to the manufacture of a product. Further research is necessary; of particular interest would be a comparison between the perceptions and purchasing decisions of consumers in each country during the introduction of luxury brands. Other avenues of future research could interest both researchers in the area of luxury brands and others wishing to learn more about the perception of CoO in a multicultural context. Finally, while this research demonstrates the central role of brand, a complementary study could deepen the analysis of consumers' lasting emotional ties with luxury brands through the concept of brand attachment, using structural equation modeling.