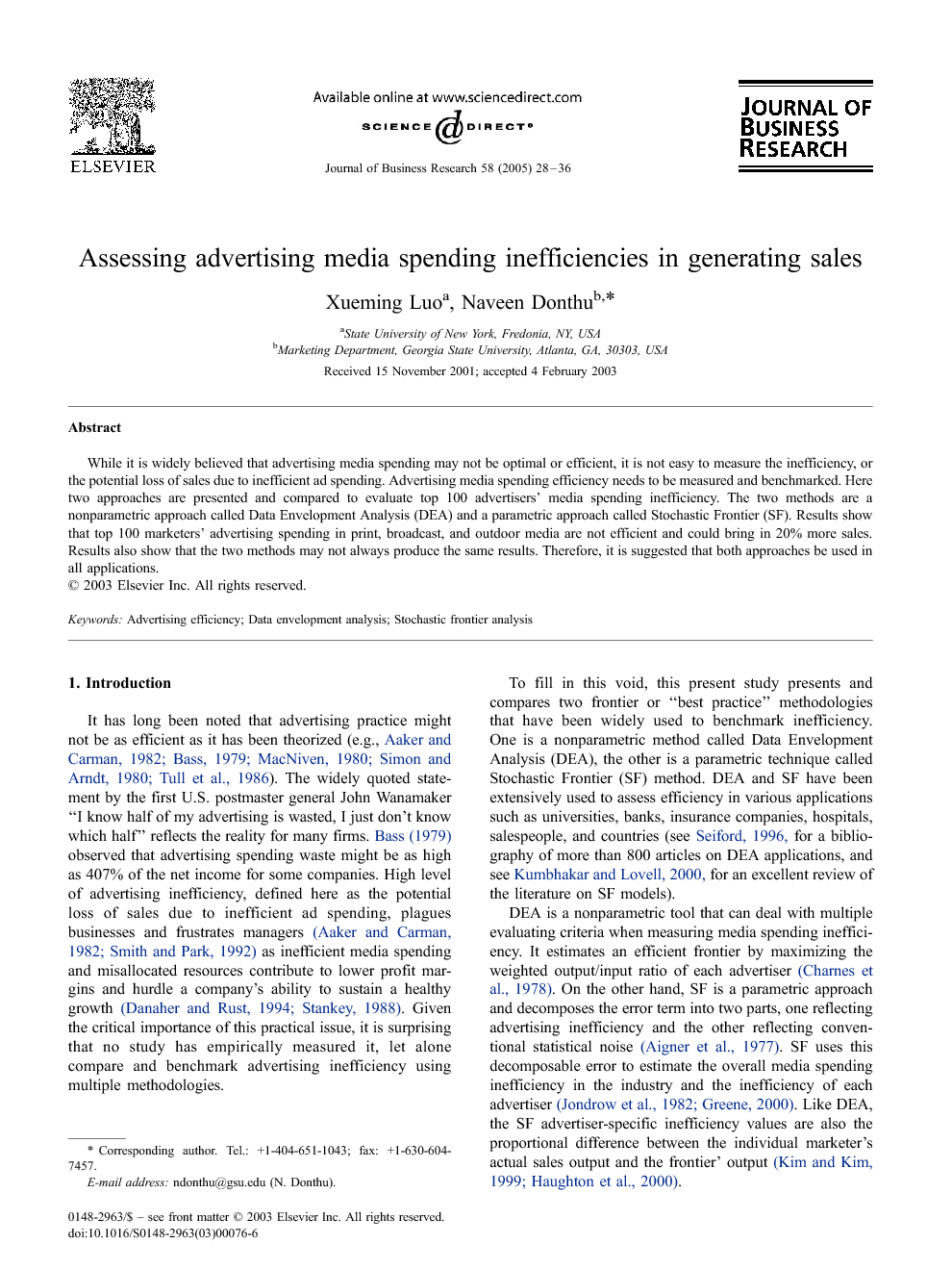 While it is widely believed that advertising media spending may not be optimal or efficient, it is not easy to measure the inefficiency, or the potential loss of sales due to inefficient ad spending. Advertising media spending efficiency needs to be measured and benchmarked. Here two approaches are presented and compared to evaluate top 100 advertisers' media spending inefficiency. The two methods are a nonparametric approach called Data Envelopment Analysis (DEA) and a parametric approach called Stochastic Frontier (SF). Results show that top 100 marketers' advertising spending in print, broadcast, and outdoor media are not efficient and could bring in 20% more sales. Results also show that the two methods may not always produce the same results. Therefore, it is suggested that both approaches be used in all applications.

It has long been noted that advertising practice might not be as efficient as it has been theorized (e.g., Aaker and Carman, 1982, Bass, 1979, MacNiven, 1980, Simon and Arndt, 1980 and Tull et al., 1986). The widely quoted statement by the first U.S. postmaster general John Wanamaker “I know half of my advertising is wasted, I just don't know which half” reflects the reality for many firms. Bass (1979) observed that advertising spending waste might be as high as 407% of the net income for some companies. High level of advertising inefficiency, defined here as the potential loss of sales due to inefficient ad spending, plagues businesses and frustrates managers Aaker and Carman, 1982 and Smith and Park, 1992 as inefficient media spending and misallocated resources contribute to lower profit margins and hurdle a company's ability to sustain a healthy growth Danaher and Rust, 1994 and Stankey, 1988. Given the critical importance of this practical issue, it is surprising that no study has empirically measured it, let alone compare and benchmark advertising inefficiency using multiple methodologies. To fill in this void, this present study presents and compares two frontier or “best practice” methodologies that have been widely used to benchmark inefficiency. One is a nonparametric method called Data Envelopment Analysis (DEA), the other is a parametric technique called Stochastic Frontier (SF) method. DEA and SF have been extensively used to assess efficiency in various applications such as universities, banks, insurance companies, hospitals, salespeople, and countries (see Seiford, 1996, for a bibliography of more than 800 articles on DEA applications, and see Kumbhakar and Lovell, 2000, for an excellent review of the literature on SF models).