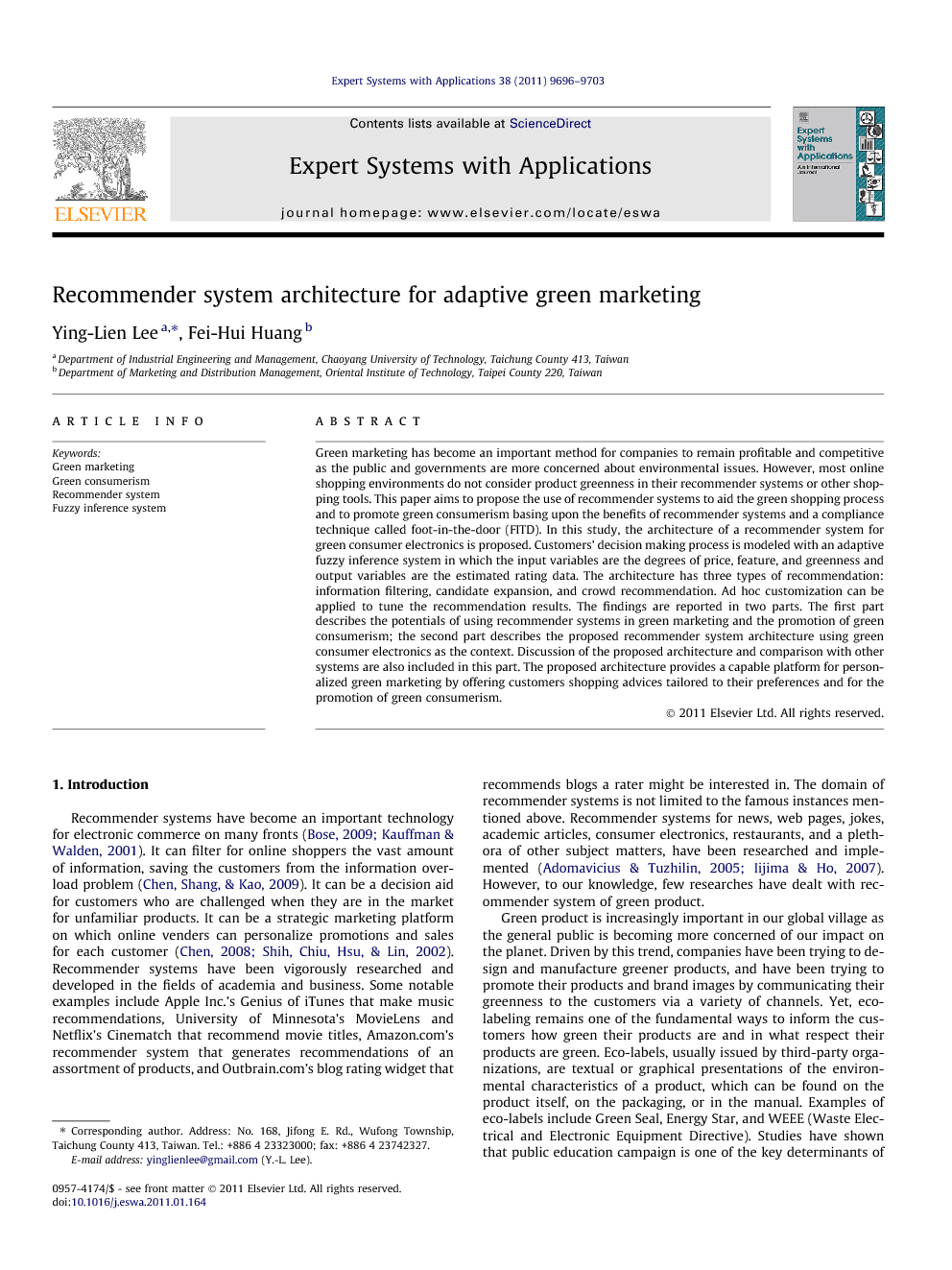 Recommender systems have become an important technology for electronic commerce on many fronts (Bose, 2009 and Kauffman and Walden, 2001). It can filter for online shoppers the vast amount of information, saving the customers from the information overload problem (Chen, Shang, & Kao, 2009). It can be a decision aid for customers who are challenged when they are in the market for unfamiliar products. It can be a strategic marketing platform on which online venders can personalize promotions and sales for each customer (Chen, 2008 and Shih et al., 2002). Recommender systems have been vigorously researched and developed in the fields of academia and business. Some notable examples include Apple Inc.’s Genius of iTunes that make music recommendations, University of Minnesota’s MovieLens and Netflix’s Cinematch that recommend movie titles, Amazon.com’s recommender system that generates recommendations of an assortment of products, and Outbrain.com’s blog rating widget that recommends blogs a rater might be interested in. The domain of recommender systems is not limited to the famous instances mentioned above. Recommender systems for news, web pages, jokes, academic articles, consumer electronics, restaurants, and a plethora of other subject matters, have been researched and implemented (Adomavicius and Tuzhilin, 2005 and Iijima and Ho, 2007). However, to our knowledge, few researches have dealt with recommender system of green product. Green product is increasingly important in our global village as the general public is becoming more concerned of our impact on the planet. Driven by this trend, companies have been trying to design and manufacture greener products, and have been trying to promote their products and brand images by communicating their greenness to the customers via a variety of channels. Yet, eco-labeling remains one of the fundamental ways to inform the customers how green their products are and in what respect their products are green. Eco-labels, usually issued by third-party organizations, are textual or graphical presentations of the environmental characteristics of a product, which can be found on the product itself, on the packaging, or in the manual. Examples of eco-labels include Green Seal, Energy Star, and WEEE (Waste Electrical and Electronic Equipment Directive). Studies have shown that public education campaign is one of the key determinants of successful eco-labeling programs (Malcohn, Paulos, Stoeckle, & Wang, 1994). Public education campaign of eco-labeling programs can be done via methods such as media coverage, regulation, promotion, school curriculum, and so on. This research proposes using recommender systems, in addition to these methods, as a means to educate and inform on-line customers. The justification of such proposal relies on two of the primary functions of a recommender system: information filtering and candidate expansion. When customers are confronted with a flood of products or with unfamiliar products, they may have difficulty in making a shopping decision. Based upon what they have purchased before, a recommender system can help the customers by filtering out items that are unlikely to be preferred. For example, Amazon.com’s recommender system generates a personalized list of recommended products each time a customer visits their web site. As to candidate expansion, when a customer is evaluating the decision to buy a product, a recommender system can ensure that other good candidates are included in the consideration set by finding related products based upon the product under consideration. Take Amazon.com’s recommender system for example again. When a customer is looking at the catalog page of a product, the recommender system recommends items similar to the current item. Tapping into the capabilities of information filtering and candidate expansion, recommender systems can be transformed into a green product advocate informing the customers of available choices that are greener. A recommender system of green products can also sieve through a set of products to retrieve only the items matching an implicitly or explicitly degree of greenness designated by a customer. Such system can also find other products whose greenness and other aspects are comparable based upon a product under consideration. The reduced effort in the decision making process may enhance the quality and users’ satisfaction of the decision (Häubl & Trifts, 2000), which in turn will make green shopping a more enjoyable experience. The adaptability of a recommender system can also contribute to the promotion of green consumerism by using a technique called foot-in-the-door (FITD) technique (Freedman & Fraser, 1966). FITD is a compliance technique in which a person is more likely to accept a larger request if this request is preceded by a smaller request. The technique is also found to be effective in computer-mediated communication (CMC) in addition to face-to-face or telephone communications (Guéguen, 2002). In a recommender system of green products, items with higher degree of greenness and with comparable or equal degrees of price and feature can be first recommended to a user who is reluctant to buy green products. Appropriate feedback should be given to the user about the environmental contribution of the purchase one has made. The degree of greenness of the recommended items in the future can be adjusted accordingly if the users’ purchasing transactions reflect acceptance or rejection of the items. The goal of this paper is to develop a recommender system architecture for green consumer electronics. Instead of simply adding an additional green attribute to the conventional recommender systems, the architecture uses an adaptive behavioral agent to find the products of a certain degree of greenness according to users’ behaviors. The agent uses an adaptive fuzzy inference system to learn users’ behavior over time with a basic assumption that a bilateral relationship of either symbiosis or antibiosis exists between the pairs of price vs. feature, price vs. greenness, and feature vs. greenness. The rest of this paper is organized as follows. The next section gives brief review of recommender systems and fuzzy inference systems. The proposed architecture is presented and discussed in Section 3. Conclusions and future research directions are presented in the final section.

In this paper, we proposed using recommender systems to aid the green shopping process and to promote green consumerism based upon the benefits of recommender systems and the FITD compliance technique. A proposed recommender system architecture in the context of green consumer electronics was then described and discussed. Previous research on this type of recommender system used weights of certain green indices as inputs. The architecture proposed in this paper accepts implicit and explicit criteria by modeling user preference and by considering ad hoc modification. The domain model is defined by the normalized scores of feature, price, and greenness, and the user model by an adaptive FIS. The architecture generates recommendations of consumer electronics to online customers by modeling their decision making with high-level decision variables. The distinctive part of the architecture is the mutual bilateral relationship of either symbiosis or antibiosis between the pairs of price vs. feature, price vs. greenness, and feature vs. greenness. User intervention is kept minimal, and on a par with commercially available recommender systems. The architecture has three types of recommendation. Information filtering recommendation uses the FIS of a customer to sieve through the product database to find the products that are likely to be preferable. Candidate expansion takes the fuzzified variables of a reference product to find other comparable products. Crowd recommendation tells a customer what other customers have bought by tapping into the wisdom of like-minded crowd. In addition, the architecture uses a quasi-conventional wisdom FIS to represent new users whose rating data are nonexistent. In the future, we will expand the architecture to include other types of green products since different product types have different ontology and eco-labeling schemes. In addition, more thorough measures should be employed to ensure that user privacy and system security are not compromised. The resultant user models have potential for green marketing, yet the data should remain anonymous if they are to be used for marketing purposes.