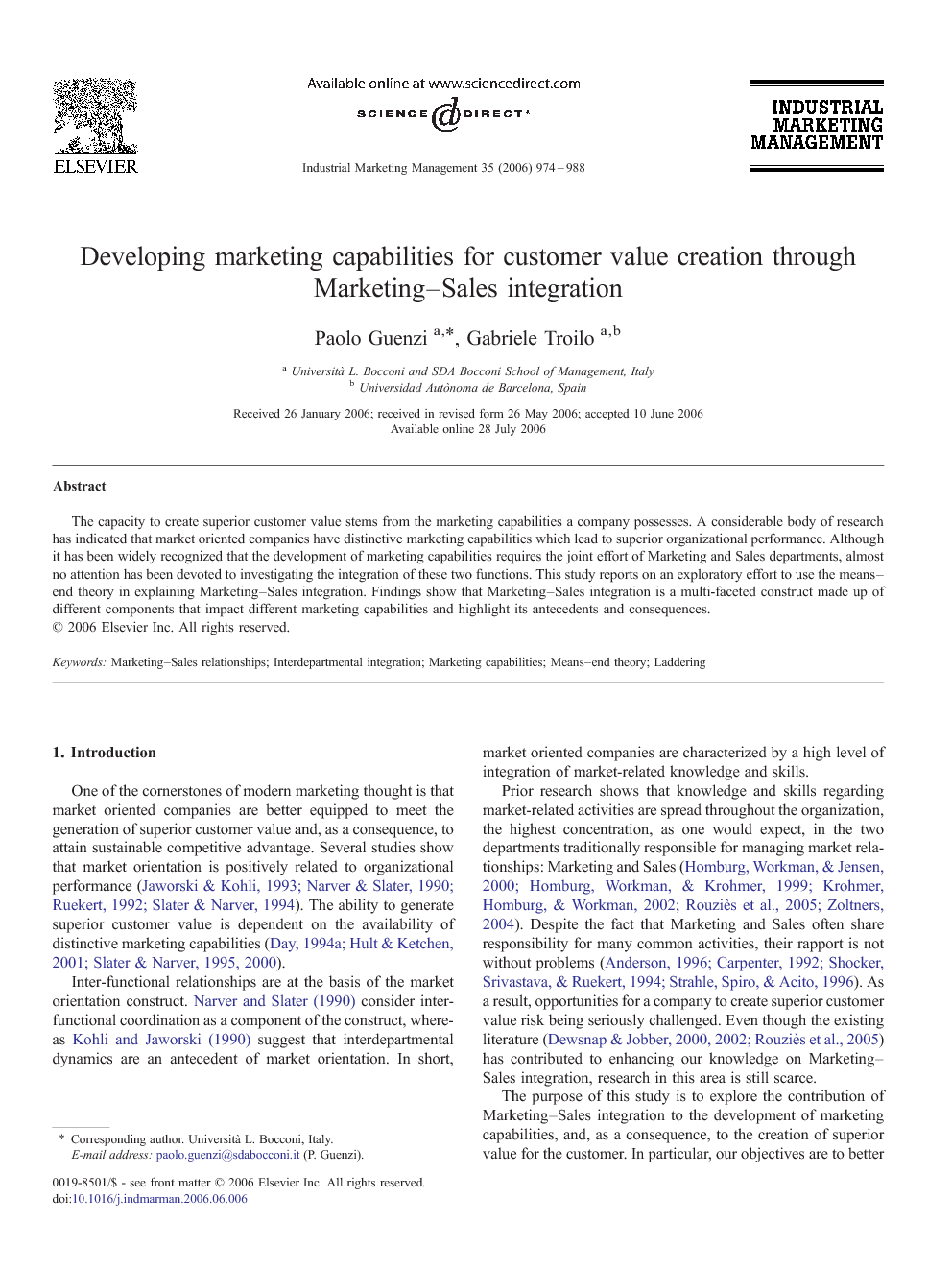 One of the cornerstones of modern marketing thought is that market oriented companies are better equipped to meet the generation of superior customer value and, as a consequence, to attain sustainable competitive advantage. Several studies show that market orientation is positively related to organizational performance (Jaworski and Kohli, 1993, Narver and Slater, 1990, Ruekert, 1992 and Slater and Narver, 1994). The ability to generate superior customer value is dependent on the availability of distinctive marketing capabilities (Day, 1994a, Hult and Ketchen, 2001, Slater and Narver, 1995 and Slater and Narver, 2000). Inter-functional relationships are at the basis of the market orientation construct. Narver and Slater (1990) consider inter-functional coordination as a component of the construct, whereas Kohli and Jaworski (1990) suggest that interdepartmental dynamics are an antecedent of market orientation. In short, market oriented companies are characterized by a high level of integration of market-related knowledge and skills. Prior research shows that knowledge and skills regarding market-related activities are spread throughout the organization, the highest concentration, as one would expect, in the two departments traditionally responsible for managing market relationships: Marketing and Sales (Homburg et al., 2000, Homburg et al., 1999, Krohmer et al., 2002, Rouziès et al., 2005 and Zoltners, 2004). Despite the fact that Marketing and Sales often share responsibility for many common activities, their rapport is not without problems (Anderson, 1996, Carpenter, 1992, Shocker et al., 1994 and Strahle et al., 1996). As a result, opportunities for a company to create superior customer value risk being seriously challenged. Even though the existing literature (Dewsnap and Jobber, 2000, Dewsnap and Jobber, 2002 and Rouziès et al., 2005) has contributed to enhancing our knowledge on Marketing–Sales integration, research in this area is still scarce.

Previous research suggests that integration is a combination of interaction and collaboration (Kahn, 1996 and Kahn, 2001). In keeping with Dewsnap and Jobber (2000) and Rouziès et al. (2005) our findings highlight a more articulated nature of the integration construct. Communication and collaboration emerge as two components of the construct, whereas trust, motivation, commitment, mutual help, reduced inter-group conflict and positive organizational climate play a role as well. Communication appears as the central node in the network of concepts representing integration. Our findings reinforce the fact that effective communication between Marketing and Sales yields many positive outcomes including: stimulating confrontation, mutual understanding, collaboration and sharing. These, in turn, foster increased effectiveness and efficiency of market knowledge development and decision making, while supporting an organizational climate based on trust and cooperation, confirming prior research on Marketing interfaces with other functional units (Fisher et al., 1997, Kahn, 2001 and Maltz and Kohli, 1996). However, earlier research has yet to fully analyze the relationship between interaction and collaboration considering them as independent components of integration. Conversely, our results indicate that interaction – obtained through meetings, exchange of documents, use of ICT, etc. – brings about collaboration, so that its role as antecedent of collaboration might be advanced. Other findings suggest that the definition of integration referred only to marketing and sales activities (Rouziès et al. 2005) is too limited. Respondents, in fact, also mention sharing of goals and resources and sharing of strategies and plans, giving emphasis to the fact that integration can be achieved at different organizational levels: from bottom-line activities to strategic decision-making and long-term investments decisions.