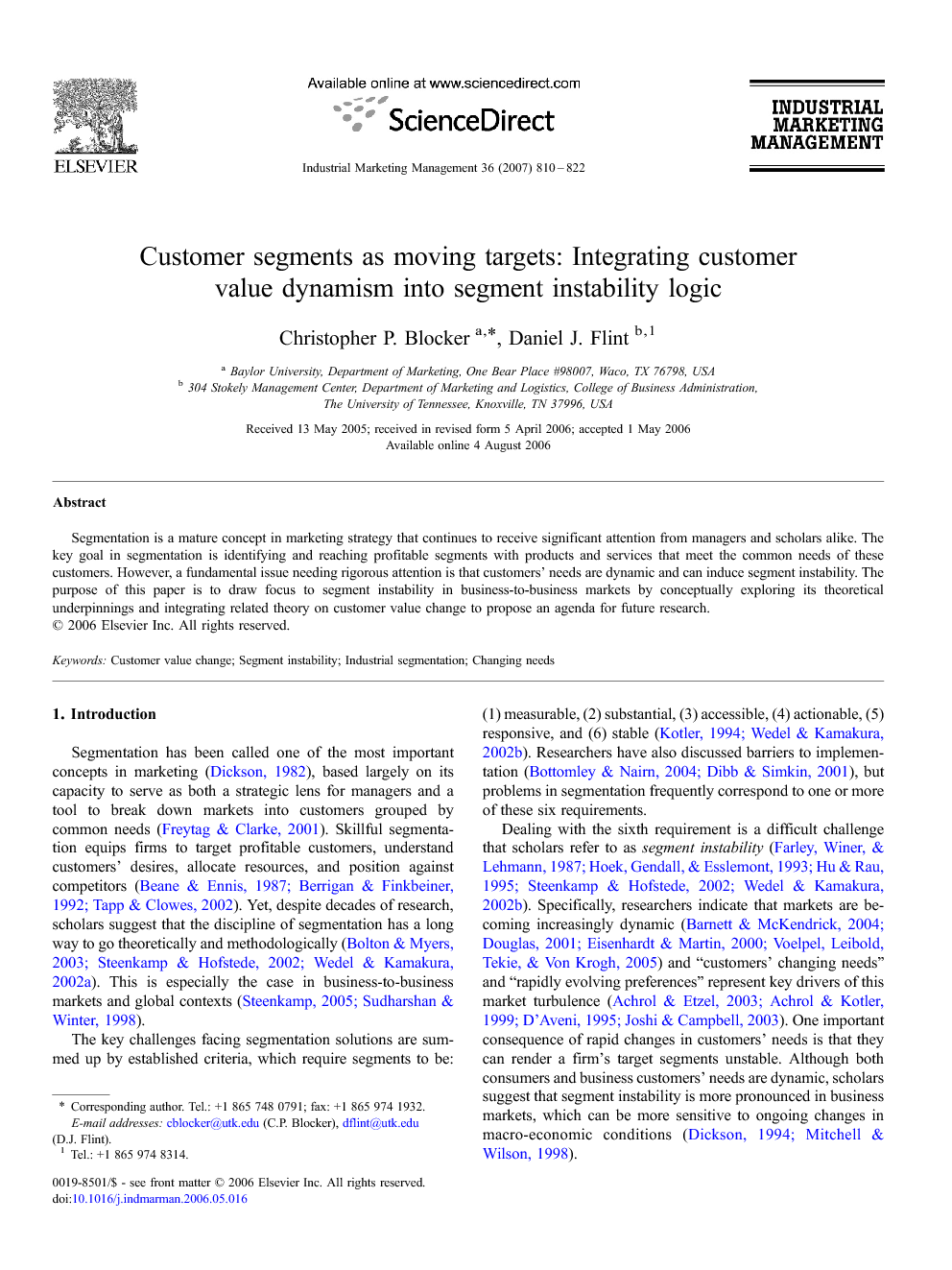 Segmentation is a mature concept in marketing strategy that continues to receive significant attention from managers and scholars alike. The key goal in segmentation is identifying and reaching profitable segments with products and services that meet the common needs of these customers. However, a fundamental issue needing rigorous attention is that customers' needs are dynamic and can induce segment instability. The purpose of this paper is to draw focus to segment instability in business-to-business markets by conceptually exploring its theoretical underpinnings and integrating related theory on customer value change to propose an agenda for future research.

Segmentation has been called one of the most important concepts in marketing (Dickson, 1982), based largely on its capacity to serve as both a strategic lens for managers and a tool to break down markets into customers grouped by common needs (Freytag & Clarke, 2001). Skillful segmentation equips firms to target profitable customers, understand customers' desires, allocate resources, and position against competitors (Beane and Ennis, 1987, Berrigan and Finkbeiner, 1992 and Tapp and Clowes, 2002). Yet, despite decades of research, scholars suggest that the discipline of segmentation has a long way to go theoretically and methodologically (Bolton and Myers, 2003, Steenkamp and Hofstede, 2002 and Wedel and Kamakura, 2002a). This is especially the case in business-to-business markets and global contexts (Steenkamp, 2005 and Sudharshan and Winter, 1998). The key challenges facing segmentation solutions are summed up by established criteria, which require segments to be: (1) measurable, (2) substantial, (3) accessible, (4) actionable, (5) responsive, and (6) stable (Kotler, 1994 and Wedel and Kamakura, 2002b). Researchers have also discussed barriers to implementation (Bottomley and Nairn, 2004 and Dibb and Simkin, 2001), but problems in segmentation frequently correspond to one or more of these six requirements.

All things being equal, suppliers would prefer customers' needs to stay relatively stable and predictable. Unfortunately, few market segments can boast this trait. Rather, studies suggest that customers are constantly undergoing changes in what they value from suppliers. In his review of industrial segmentation literature, Plank went so far as to say “segment stability has been ignored both conceptually and empirically, as there has been no longitudinal work, nor suggestions for the same” (1985, p. 87). Unfortunately, almost 20 years later, it is fair to say the only considerable difference is more concerns have been expressed (Freytag and Clarke, 2001, Mitchell and Wilson, 1998 and Steenkamp and Hofstede, 2002). Likely reasons for this gap include an overemphasis on quantitative modeling coupled by an ongoing search for better variables and the difficulties of longitudinal research. Furthermore, attempts to understand what segments currently need has been a significant challenge, and until recently, most marketing literature has not focused deeply on understanding the complexity of customers' change processes (Flint et al., 2002). We sought to take an initial step toward closing this gap by offering several contributions to the exploration of SI. First, our discussion represents an initial attempt to conceptually define the SI phenomenon and highlight the issues it creates in industrial contexts. Second, a review of literature directly addressing SI in consumer settings and in other perspectives attempts to understand the phenomenon from several levels of analysis. Third, we proposed a theoretical framework of SI to guide further conceptual development and empirical study. This framework attempts to provide an initial response to the question posed earlier, which calls for clarity around the characteristics of SI and the way it occurs, including its drivers and outcomes. In this process, we explored theoretical insights for understanding the dynamics of customer need heterogeneity within segments (Wedel & Kamakura, 2002a). Finally, the model extends current customer value change theory by conceptualizing it at a broader level of analysis and applying it in a strategic context.