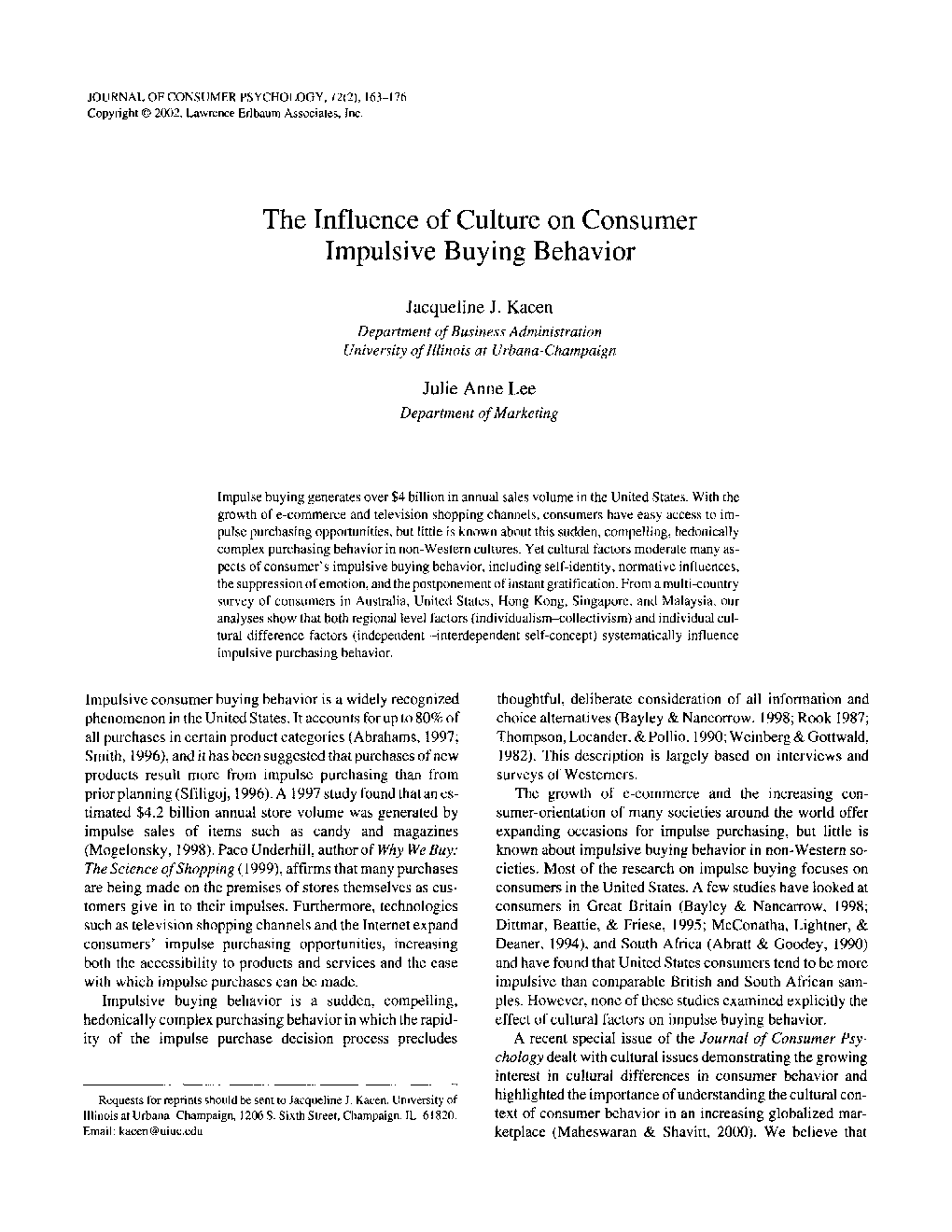 Impulse buying generates over $4 billion in annual sales volume in the United States. With the growth of e-commerce and television shopping channels, consumers have easy access to impulse purchasing opportunities, but little is known about this sudden, compelling, hedonically complex purchasing behavior in non-Western cultures. Yet cultural factors moderate many aspects of consumer's impulsive buying behavior, including self-identity, normative influences, the suppression of emotion, and the postponement of instant gratification. From a multi-country survey of consumers in Australia, United States, Hong Kong, Singapore, and Malaysia, our analyses show that both regional level factors (individualism–collectivism) and individual cultural difference factors (independent –interdependent self-concept) systematically influence impulsive purchasing behavior.

Impulsive consumer buying behavior is a widely recognized phenomenon in the United States. It accounts for up to 80% of all purchases in certain product categories (Abrahams, 1997; Smith, 1996), and it has been suggested that purchases of new products result more from impulse purchasing than from prior planning (Sfiligoj, 1996). A 1997 study found that an estimated $4.2 billion annual store volume was generated by impulse sales of items such as candy and magazines (Mogelonsky, 1998). Paco Underhill, author of Why We Buy: The Science of Shopping (I 999), affirms that many purchases are being made on the premises of stores themselves as customers give in to their impulses. Furthermore, technologies such as television shopping channels and the Internet expand consumers' impulse purchasing opportunities, increasing both the accessibility to products and services and the ease with which impulse purchases can be made. Impulsive buying behavior is a sudden, compelling, hedonically complex purchasing behavior in which the rapidity of the impulse purchase decision process precludesthoughtful, deliberate consideration of all information and choice alternatives (Bayley & Nancoaow, 1998; Rook 1987; Thompson, Locander, & Pollio, 1990; Weinberg & Gottwald, 1982). This description is largely based on interviews and surveys of Westerners. The growth of e-commerce and the increasing consumer- orientation of many societies around the world offer expanding occasions for impulse purchasing, but little is known about impulsive buying behavior in non-Western societies. Most of the research on impulse buying focuses on consumers in the United States. A few studies have looked at consumers in Great Britain (Bayley & Nancaaow, 1998; Dittmar, Beattie, & Friese, 1995; McConatha, Lightner, & Deaner, 1994), and South Africa (Abratt & Goodey, 1990) and have found that United States consumers tend to be more impulsive than comparable British and South African samples. However, none of these studies examined explicitly the effect of cultural factors on impulse buying behavior.