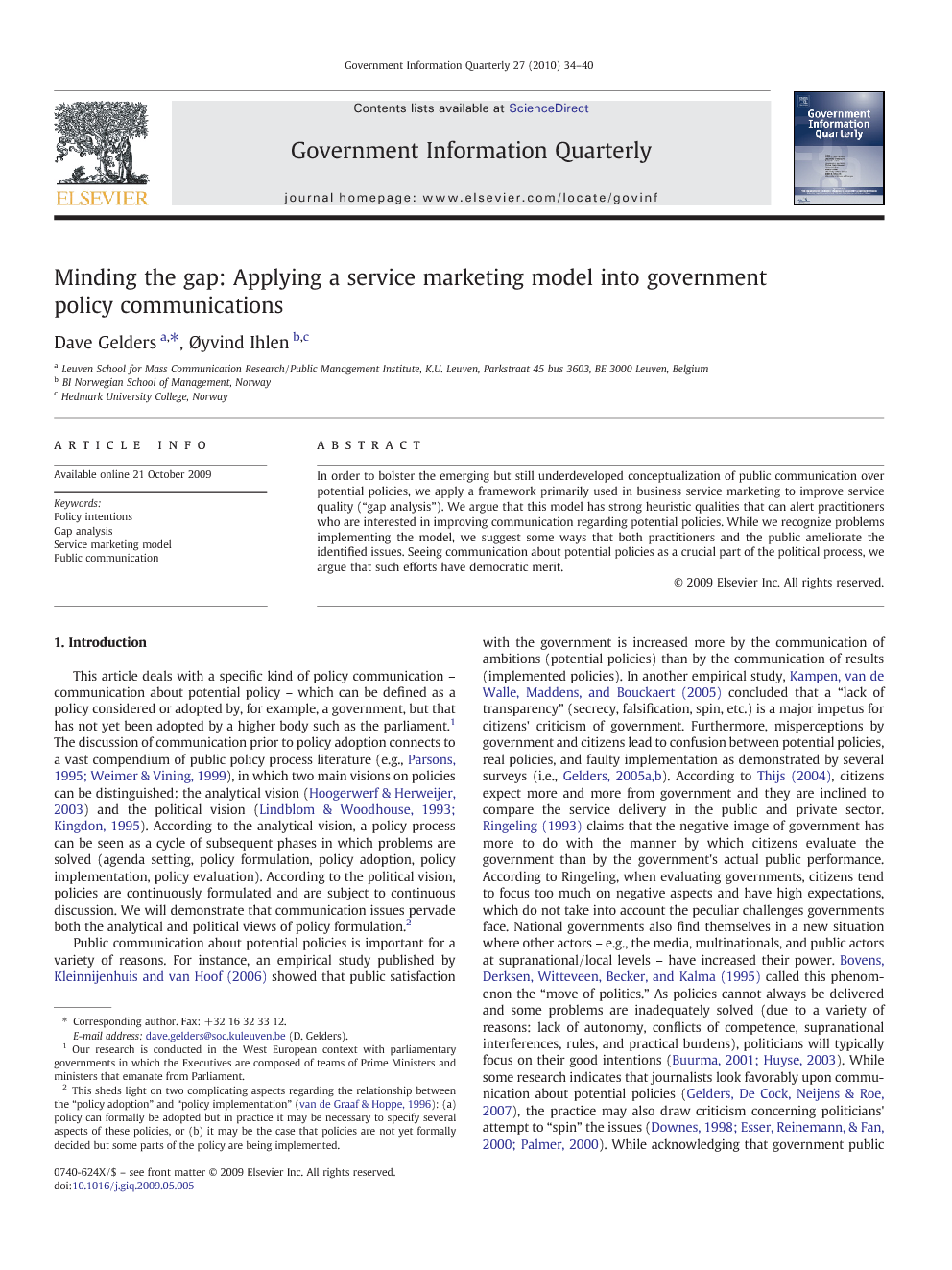 In order to bolster the emerging but still underdeveloped conceptualization of public communication over potential policies, we apply a framework primarily used in business service marketing to improve service quality (“gap analysis”). We argue that this model has strong heuristic qualities that can alert practitioners who are interested in improving communication regarding potential policies. While we recognize problems implementing the model, we suggest some ways that both practitioners and the public ameliorate the identified issues. Seeing communication about potential policies as a crucial part of the political process, we argue that such efforts have democratic merit.

This article deals with a specific kind of policy communication – communication about potential policy – which can be defined as a policy considered or adopted by, for example, a government, but that has not yet been adopted by a higher body such as the parliament.1 The discussion of communication prior to policy adoption connects to a vast compendium of public policy process literature (e.g., Parsons, 1995 and Weimer and Vining, 1999), in which two main visions on policies can be distinguished: the analytical vision (Hoogerwerf & Herweijer, 2003) and the political vision (Lindblom and Woodhouse, 1993 and Kingdon, 1995). According to the analytical vision, a policy process can be seen as a cycle of subsequent phases in which problems are solved (agenda setting, policy formulation, policy adoption, policy implementation, policy evaluation). According to the political vision, policies are continuously formulated and are subject to continuous discussion. We will demonstrate that communication issues pervade both the analytical and political views of policy formulation.2 Public communication about potential policies is important for a variety of reasons. For instance, an empirical study published by Kleinnijenhuis and van Hoof (2006) showed that public satisfaction with the government is increased more by the communication of ambitions (potential policies) than by the communication of results (implemented policies). In another empirical study, Kampen, van de Walle, Maddens, and Bouckaert (2005) concluded that a “lack of transparency” (secrecy, falsification, spin, etc.) is a major impetus for citizens' criticism of government. Furthermore, misperceptions by government and citizens lead to confusion between potential policies, real policies, and faulty implementation as demonstrated by several surveys (i.e., Gelders, 2005a and Gelders, 2005b). According to Thijs (2004), citizens expect more and more from government and they are inclined to compare the service delivery in the public and private sector. Ringeling (1993) claims that the negative image of government has more to do with the manner by which citizens evaluate the government than by the government's actual public performance. According to Ringeling, when evaluating governments, citizens tend to focus too much on negative aspects and have high expectations, which do not take into account the peculiar challenges governments face. National governments also find themselves in a new situation where other actors – e.g., the media, multinationals, and public actors at supranational/local levels – have increased their power. Bovens, Derksen, Witteveen, Becker, and Kalma (1995) called this phenomenon the “move of politics.” As policies cannot always be delivered and some problems are inadequately solved (due to a variety of reasons: lack of autonomy, conflicts of competence, supranational interferences, rules, and practical burdens), politicians will typically focus on their good intentions (Buurma, 2001 and Huyse, 2003). While some research indicates that journalists look favorably upon communication about potential policies (Gelders, De Cock, Neijens & Roe, 2007), the practice may also draw criticism concerning politicians' attempt to “spin” the issues (Downes, 1998, Esser et al., 2000 and Palmer, 2000). While acknowledging that government public relations also has a “dark” side, we will suggest a model for ethical communication about potential policies. Many scholars have pointed out that there is relatively little research on public sector communication (e.g., Graber, 2002, Lee, 2007 and Liu and Horsley, 2007). Most scholars seem to agree that experiences from the private sector can be applicable to the public sector if scholars and practitioners pay attention to some of the specific peculiarities of the latter (Falcione & Adrian, 1997; Gelders, Bouckaert & van Ruler, 2007). Gelders et al. (2007) point to four characteristics of the public sector that distinguishes it from the private sector: a more complicated, unstable environment; additional legal and formal constraints; more rigid procedures; and more diverse products and objectives. While keeping these differences in mind, we will apply a business service model that is intended to increase customers' service satisfaction to public sector communication. While using the word “customer” in the public context, we are aware that there is debate on this issue in public administration literature (e.g., Osborne and Gaebler, 1993 and Denhardt and Denhardt, 2003). Citizens can be seen as subjects (who are expected to obey the law), voters, customers, and participants in (interactive) policy-making processes. Although there are differences between the public and private sectors, we maintain that citizens also receive services such as health care and education and thus that the use of the “customers” concept is relevant in the public sector (e.g., Bouckaert & Thijs, 2003). In order to bolster the emerging but still underdeveloped conceptualization of communication about potential policies, this paper more specifically aims to (1)apply a framework primarily used in business service marketing to improve service quality; (2)identify some problems practitioners may experience when attempting to implement this framework; and (3)draw normative conclusions looking both at what practitioners may do and what the public can do in order to improve public communication about potential policies. The following section briefly discusses the concept of service before introducing the business service framework (“gap analysis model”).

In this concluding section, we discuss (a) the most important lessons for the use of the business service model, (b) suggestions for practice, and (c) recommendations for further inquiry. 4.1. Important lessons for the use of the business service model Communicating about potential policies may be considered, like many topics in the public sector, as a predominantly experience-based service. Parasuraman, Zeithaml, and Berry (1985) point to trust as a critical success factor in successful service relations. Although there are differences between the public and private sectors (Gelders et al., 2007), the business service model advocated in this article seemed to be useful for the analysis of government communication about potential policies. In addition, trust in government, more than trust in business, is a delicate issue given the unreasonably high citizen's expectations as explained by Ringeling (1993). Politicians lost some of their power to the advantage of media, multinationals, and other actors but try to compensate by frequently communicating about their intentions. It is often considered a problem that politicians are too ambitious and promise more than they can realize. For instance, subsequent surveys indicate that 60% of the Belgian people believe this (ISPO (Institute for Social and Political Opinion Research) (1997), ISPO (Institute for Social and Political Opinion Research) (2002) and Billiet, 2005). However, 40% do not agree with this statement and are subject to dissatisfaction. Negative customer experiences, which are a result of the many factors hindering the implementation of an announced policy, are almost inevitable for this type of “service industry.” 4.2. Suggestions for practice The gap analysis model dovetails with the basic idea advocated in several communication management publications that during all phases of the policy-making process, communications should be analyzed and managed (Damoiseaux & van Ruler, 1998). As a result, this means that communication needs to be managed during the preparation stage of policies (van Ruler, Elving, van den Hooff, Smit & Verhoeven, 2005). Albeit not obvious in the strategic political context of communicating potential policies, the gap analysis model may be used as a rudimentary conceptual framework to assess the process of communicating about potential policies (Bouckaert & Vandeweyer, 1999) and as a step towards guides for action at each gap level aimed to improve communication between governments and citizens on potential policies, as illustrated by Table 1. Table options We are aware that the communication guidelines mentioned above strive for an idealistic scenario with active and interested citizens and not the citizenry at large. Although idealistic, it is worthwhile to specify guidelines for effective and efficient communication with citizens. Currently, these action guides offer reasonable principles but they are insufficiently detailed to be utilized as criteria and often require the application of subjective and informed judgment by politicians and bureaucrats. Communication between citizens and the government is negotiated rather than being absolute (Grunig, 1992). Therefore, it is extremely important to develop policy while maintaining ongoing dialogue between the actors involved in communication needs and standards. Gelders (2005a) showed that such dialogues are currently limited to discussions within closed groups (i.e., between communication advisors within one political party or within an association of civil servant communication professionals), but that these groups seldom discuss deontological dilemmas about the tension between propaganda and public relations with each other. To facilitate this dialogue, think tanks and universities can be involved as “honest brokers.” Customer satisfaction will only be achieved when the service meets the expected performance. Promotion of realistic expectations through performance communication will yield service validity (matching service expectations) and thus promote customer satisfaction (e.g., Galetzka et al., 2006 and Zeithaml et al., 1990). Politicians should learn from businesses to communicate less ambitious promises that are easier to reach. They should be inspired by the IKEA company, which announced that reorders of missing material will be sent within three weeks all the while knowing that it is normally sent within two (Rijnja, 2007). Such announcements can lead to more customer satisfaction than bold political promises. As mentioned, trust is an important element in this perspective.5 4.3. Recommendations for further inquiry We showed that there is limited research regarding what people expect or appreciate vis-à-vis public communication about potential policies. Given the different outcomes of these studies (Kleinnijenhuis and van Hoof, 2006 and Gelders, 2005c), further analysis seems to be necessary. One can examine if different opinions between citizens in several countries can be found parallel to the studies by Gelders, De Cock, Neijens, and Roe (2007) on the opinion of communication professionals in the Netherlands and Belgium. One can also study the influence of political and psychological factors explaining citizens' opinion vis-à-vis communication about potential policies. For example, does this opinion differ depending on the stage in the election cycle? It is likely that when the honeymoon period of a new government has passed, people are more critical towards such communication (e.g., Kleinnijenhuis & van Hoof, 2006). Kleinnijenhuis and van Hoof (2006) assumed that people do not like ambiguous communication, but further research should take into account the results of psychological studies demonstrating that people differ in terms of “need for closure” (Webster and Kruglanski, 1994 and van Hiel et al., 2004) and in terms of “need for cognition” (Pieters, Verplanken & Modde, 1987). The former refers to the preference for order and predictability and the latter refers to the extent to which people engage in and enjoy demanding cognitive activities. We hope that this study can be a step forward to more audience-oriented research in the government policy communication field.