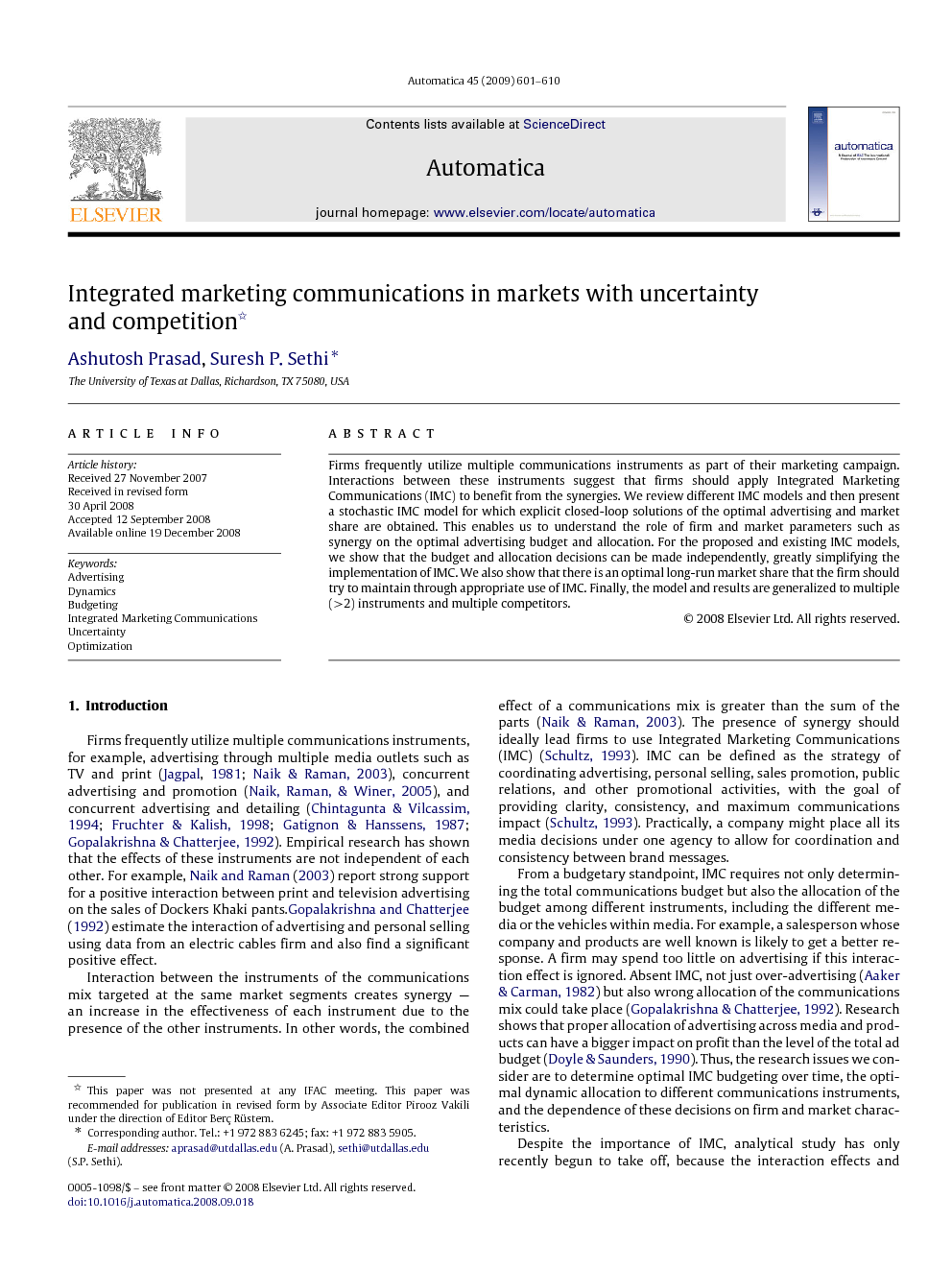 Firms frequently utilize multiple communications instruments as part of their marketing campaign. Interactions between these instruments suggest that firms should apply Integrated Marketing Communications (IMC) to benefit from the synergies. We review different IMC models and then present a stochastic IMC model for which explicit closed-loop solutions of the optimal advertising and market share are obtained. This enables us to understand the role of firm and market parameters such as synergy on the optimal advertising budget and allocation. For the proposed and existing IMC models, we show that the budget and allocation decisions can be made independently, greatly simplifying the implementation of IMC. We also show that there is an optimal long-run market share that the firm should try to maintain through appropriate use of IMC. Finally, the model and results are generalized to multiple (>2) instruments and multiple competitors.

Firms frequently utilize multiple communications instruments, for example, advertising through multiple media outlets such as TV and print (Jagpal, 1981 and Naik and Raman, 2003), concurrent advertising and promotion (Naik, Raman, & Winer, 2005), and concurrent advertising and detailing (Chintagunta and Vilcassim, 1994, Fruchter and Kalish, 1998, Gatignon and Hanssens, 1987 and Gopalakrishna and Chatterjee, 1992). Empirical research has shown that the effects of these instruments are not independent of each other. For example, Naik and Raman (2003) report strong support for a positive interaction between print and television advertising on the sales of Dockers Khaki pants.Gopalakrishna and Chatterjee (1992) estimate the interaction of advertising and personal selling using data from an electric cables firm and also find a significant positive effect. Interaction between the instruments of the communications mix targeted at the same market segments creates synergy — an increase in the effectiveness of each instrument due to the presence of the other instruments. In other words, the combined effect of a communications mix is greater than the sum of the parts (Naik & Raman, 2003). The presence of synergy should ideally lead firms to use Integrated Marketing Communications (IMC) (Schultz, 1993). IMC can be defined as the strategy of coordinating advertising, personal selling, sales promotion, public relations, and other promotional activities, with the goal of providing clarity, consistency, and maximum communications impact (Schultz, 1993). Practically, a company might place all its media decisions under one agency to allow for coordination and consistency between brand messages. From a budgetary standpoint, IMC requires not only determining the total communications budget but also the allocation of the budget among different instruments, including the different media or the vehicles within media. For example, a salesperson whose company and products are well known is likely to get a better response. A firm may spend too little on advertising if this interaction effect is ignored. Absent IMC, not just over-advertising (Aaker & Carman, 1982) but also wrong allocation of the communications mix could take place (Gopalakrishna & Chatterjee, 1992). Research shows that proper allocation of advertising across media and products can have a bigger impact on profit than the level of the total ad budget (Doyle & Saunders, 1990). Thus, the research issues we consider are to determine optimal IMC budgeting over time, the optimal dynamic allocation to different communications instruments, and the dependence of these decisions on firm and market characteristics. Despite the importance of IMC, analytical study has only recently begun to take off, because the interaction effects and dynamics tend to make these models difficult to analyze. In this paper we propose an IMC model where the firm makes two advertising spending decisions that are synergistic. The model is tractable even under random disturbances. We provide explicit, closed-loop solutions of the optimal advertising spending decisions and market share. Comparative statics are presented. The analysis leads to a discussion of the impact of synergies on the total advertising budget and allocation among the instruments. Part confirms existing results and part provides new answers. We find that there is an optimal, long-run market share that the firm should try to maintain and it should reduce deviations from this caused by share decay and randomness through appropriate use of IMC. We then extend the model to multiple (>2) instruments and show that the insights are unaffected. A general result is obtained that encompasses many IMC models in the literature, showing that allocation and budgeting decisions can be made separately. This result simplifies the application of IMC effects and enables us to extend the analysis to the situation with multiple competitors where the competing firms adopt IMC strategies. The remainder of the paper is organized as follows. In Section 2 we survey relevant background literature on IMC. Section 3 builds on this information to conceptualize the model. In Sections 4 and 5 we provide the analysis, followed by an illustration and discussion. In Section 6 we extend the analysis to the case where there are more than two media and more than one firm. Section 7 concludes the paper along with suggestions for future research. Proofs of all results are in the Appendix.

The concept of Integrated Marketing Communications (IMC) has become very important for advertisers and decision makers in the last decade. IMC seeks to leverage the synergy between different communications activities. There is no doubt that IMC is a well established theory. Empirical studies have shown that synergy between communications mix elements can be significant. A number of marketing mix models have operationalized synergy as an interaction term. Such models can be quite difficult to solve analytically or even numerically, particularly when a closed-loop solution and/or presence of uncertainty are called for. And including competition or more than 2 instruments is also a difficult task. Yet ignoring synergy when it exists is obviously suboptimal too. In this paper we are able to develop an IMC model where explicit closed-loop solutions can be obtained for a firm with multiple communications instruments, even in the presence of uncertainty. Uncertainty in advertising is modeled through the well-known stochastic differential equation approach. The paper extends the work of Fruchter and Kalish (1998) to include IMC and explicit solutions, and of Naik and Raman (2003) to multiple media, and of both to advertising interaction with sales, strategic competitors and stochastic analysis. Stochastic differential equations are hard to analyze, even numerically. The reason is that for each guess of the optimal advertising path, several sample market share paths must be drawn in order to compute the expected profit. Analysis is frequently done by excluding uncertainty in the theory but inserting it in the estimation stage. In contrast, the proposed model allows stochasticity to be handled analytically. The optimal advertising decision depends only on the market share and not on the nature of the disturbance. In other words, the advertising decisions are robust to increase or decrease in uncertainty in the market response to advertising. The intuition is that on average the increase in profit from better response cancels out the decrease in profits from poor responses. We find that positive expenditure on all communications instruments is optimal if synergy exists, even if the instrument is ineffectual in isolation (Proposition 1). In contrast to allocation in the absence of synergy, the ratio of advertising expenditures does not vary as the ratio of the square of the effectiveness of the advertising, but that the weaker instrument is allocated a disproportionately higher share of the budget (Proposition 2). We find that the allocation depends on factors such as the effectiveness of the different advertising, but that it is independent of factors such as discount rate or decay caused by forgetting, background competition etc. (Proposition 3). We obtain a closed-loop solution where the optimal advertising depends on the current market share of the firm (Proposition 4). Results showed that the firm should do more advertising when the market share drops than when it is high, in contrast to the affordability method or the percentage of sales methods of advertising budgeting (Proposition 4). The comparative statics in Table 1 summarize the effects of synergy. The total IMC budget would be lower and profitability would be lower if synergy were present in the marketplace but ignored in the firm’s analysis. The firm would be seeking a lower steady state market share. It is not the case, however, that the expenditure on all instruments would drop. It might actually be higher in some, following from the discussion after Proposition 2, but there would be an incorrect allocation to the different media instruments. The steady state market share takes the form of an attraction model, and its distribution, due to uncertainties in the market, follows a Beta distribution (Proposition 5). We show that the decision on how much to allocate on different instruments or media is independent of the total IMC budget (Proposition 6). We extend the model to multiple media and show that it can still be solved (Proposition 7). Finally, the model can include competition without difficulty. Future research can extend the model to consider adding penalty of modifying ad buys, or the premium for spot ad buying (Raman & Naik, 2004). Another generalization is to have advertising influence the noise term of the state equation in addition to influencing the drift term as in the present case. Recent work in this area has been done by Buratto and Grosset (2006) for a linear-quadratic, finite horizon model, with two advertising controls where one control also affects the diffusion term. The model can be empirically tested. Methods of estimating stochastic differential equations (SDE) using discrete observations are used in Finance for analyzing stocks, bonds and currencies time series, and in Electrical engineering, for signal processing. The simplest method is Euler discretization followed by time-series estimation, the problem being that without adequate correction for unrecorded noise between the discrete time intervals, estimates can be biased. If the SDE is linear (i.e., the drift component is linear) one uses the Kalman Filter, as in Naik and Raman (2003). With nonlinear SDEs, as in our case, if the SDE can be solved, Maximum Likelihood estimation can be used. Other options include the Extended Kalman Filter (e.g., Naik et al. (2008)), Method of Simulated Moments, MCMC methods, or Nonparametric methods.