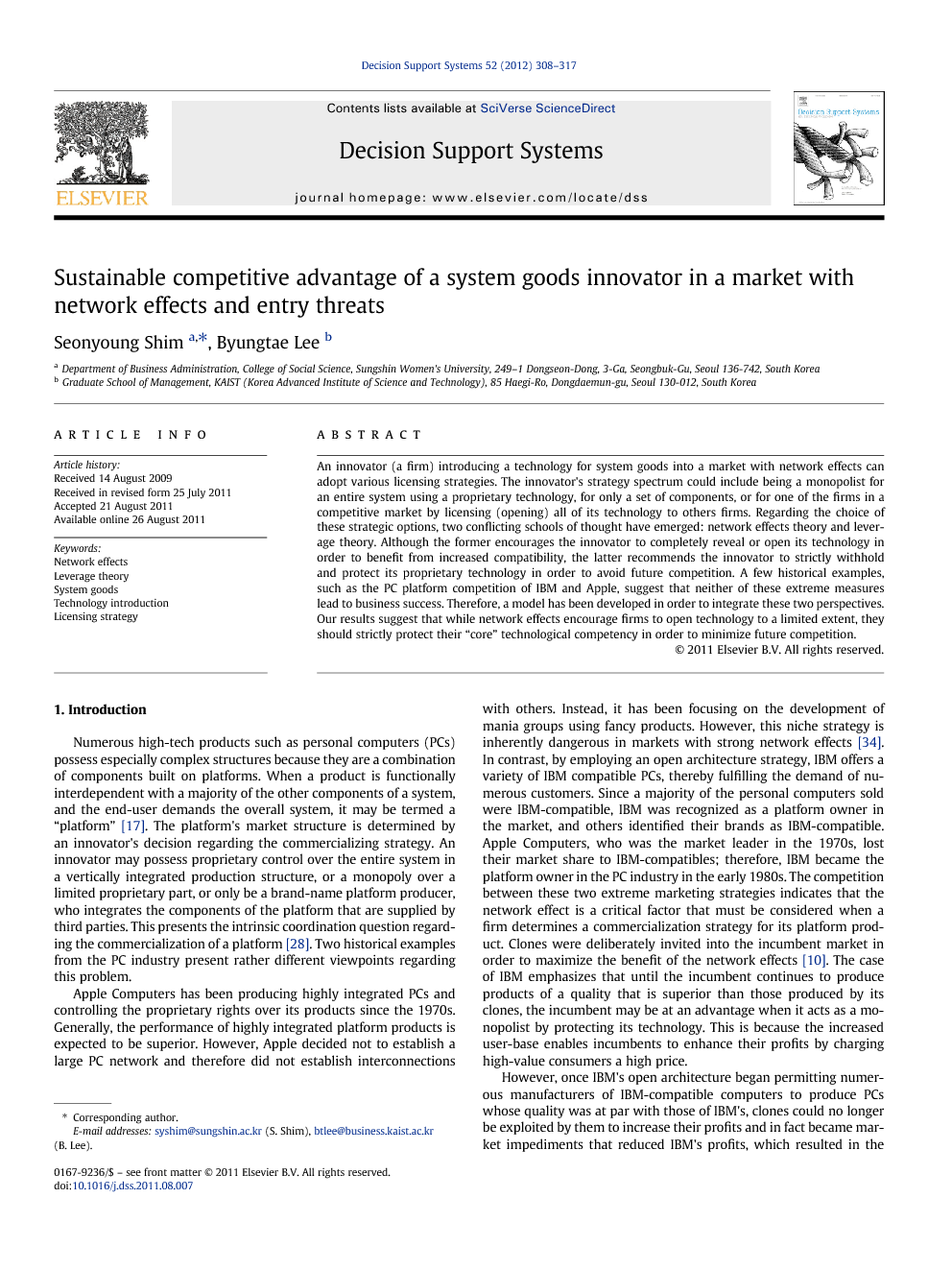 An innovator (a firm) introducing a technology for system goods into a market with network effects can adopt various licensing strategies. The innovator's strategy spectrum could include being a monopolist for an entire system using a proprietary technology, for only a set of components, or for one of the firms in a competitive market by licensing (opening) all of its technology to others firms. Regarding the choice of these strategic options, two conflicting schools of thought have emerged: network effects theory and leverage theory. Although the former encourages the innovator to completely reveal or open its technology in order to benefit from increased compatibility, the latter recommends the innovator to strictly withhold and protect its proprietary technology in order to avoid future competition. A few historical examples, such as the PC platform competition of IBM and Apple, suggest that neither of these extreme measures lead to business success. Therefore, a model has been developed in order to integrate these two perspectives. Our results suggest that while network effects encourage firms to open technology to a limited extent, they should strictly protect their “core” technological competency in order to minimize future competition.

Numerous high-tech products such as personal computers (PCs) possess especially complex structures because they are a combination of components built on platforms. When a product is functionally interdependent with a majority of the other components of a system, and the end-user demands the overall system, it may be termed a “platform” [17]. The platform's market structure is determined by an innovator's decision regarding the commercializing strategy. An innovator may possess proprietary control over the entire system in a vertically integrated production structure, or a monopoly over a limited proprietary part, or only be a brand-name platform producer, who integrates the components of the platform that are supplied by third parties. This presents the intrinsic coordination question regarding the commercialization of a platform [28]. Two historical examples from the PC industry present rather different viewpoints regarding this problem. Apple Computers has been producing highly integrated PCs and controlling the proprietary rights over its products since the 1970s. Generally, the performance of highly integrated platform products is expected to be superior. However, Apple decided not to establish a large PC network and therefore did not establish interconnections with others. Instead, it has been focusing on the development of mania groups using fancy products. However, this niche strategy is inherently dangerous in markets with strong network effects [34]. In contrast, by employing an open architecture strategy, IBM offers a variety of IBM compatible PCs, thereby fulfilling the demand of numerous customers. Since a majority of the personal computers sold were IBM-compatible, IBM was recognized as a platform owner in the market, and others identified their brands as IBM-compatible. Apple Computers, who was the market leader in the 1970s, lost their market share to IBM-compatibles; therefore, IBM became the platform owner in the PC industry in the early 1980s. The competition between these two extreme marketing strategies indicates that the network effect is a critical factor that must be considered when a firm determines a commercialization strategy for its platform product. Clones were deliberately invited into the incumbent market in order to maximize the benefit of the network effects [10]. The case of IBM emphasizes that until the incumbent continues to produce products of a quality that is superior than those produced by its clones, the incumbent may be at an advantage when it acts as a monopolist by protecting its technology. This is because the increased user-base enables incumbents to enhance their profits by charging high-value consumers a high price. However, once IBM's open architecture began permitting numerous manufacturers of IBM-compatible computers to produce PCs whose quality was at par with those of IBM's, clones could no longer be exploited by them to increase their profits and in fact became market impediments that reduced IBM's profits, which resulted in the creation of an almost perfectly competitive market. Compaq, the leader among IBM clones aggressively threatened IBM's position. IBM's market share declined from 30.7% in 1985 to 16.9% in 1989 [26]. This indicates that IBM's open-standard strategy failed to deliver long-term success. In this context, the existence of seemingly conflicting opinions regarding the open-standard strategy resulted in the emergence of the leverage theory. The leverage theory [5], [9] and [32] encourages platform owners to completely withhold proprietary technology in order to avoid future competition with entrants. An open architecture and a cloning strategy facilitate the reverse-engineering of proprietary components, which enables new firms to enter the market. If a new competitor succeeds in entering the market using reverse-engineering, the negative impact of rent dissipation may exceed the benefit derived from the network effects. Therefore, it is recommended that all components are included in a vertically integrated market structure in order to restrict the entry of new firms. This strategy is consistent with that of Apple Computers; however, this strategy also failed [34]. Unlike IBM, Apple Computers retained all the technological expertise for its Apple series computers in-house, and therefore produced incompatible PCs. Apple failed to establish a formidable standard in the PC market and held only 20% of the market by 1983 [26]. The strategic failures of platform owners in the PC market indicate the limitations of these two contrary perspectives. Now, we will identify those aspects of network effects that were overlooked by Conner [10] in the creation of an effective cloning strategy of a network platform. Moreover, the reasons for the recent revision of the term “IBM-compatible” to “Wintel-compatible” will be investigated. Currently, Intel and Microsoft (MS) are essentially considered to be the platform owners in the PC market. The term “Platform owner” represents a firm that possesses the ability to control the evolution of the platform architecture, and the likelihood of innovation in complementary markets. Hence platform owner leads the commercialization of a system platform and receives the maximum benefit from a successful commercialization [17]. By 1986, IBM realized that it had established a standard and in doing so, they had spawned a number of imitators by ceding the rights to their most valuable PC components to Intel and MS [26]. When IBM adopted the cloning strategy, it could not ensure that the quality of its products would be superior than that of its “clones” unless it maintained a veiled technology. However, IBM possessed no such proprietary core technology that would enable it to deliver a higher quality than its clones. Moreover, the term “clone” implies that their product quality is comparable to that of the incumbent; therefore, it is unlikely that users perceive IBM's products to be of a higher quality than that of its “clones.” These historical examples prompted us to investigate the characteristics that a platform owner must possess in order to be successful. An analytical model was developed in order to answer the following research question: In a high-tech market, which is characterized by strong network effects and entry threats, what enables a company to become a sustainable platform owner? In a high-tech market, technological innovation and consumer acceptance advance rapidly, which makes it rather difficult for the incumbent to acquire a durable first-mover advantage [31]. Our results indicate the strategic importance of proprietary technology management and its synergistic resolution with the network effects environment.

We investigated strategies for commercializing the system platform in a market where the network effects were present. There existed two seemingly conflicting perspectives with respect to this issue, which were reconciled using our model. We indicated that both the network effects and the sustainability of technology must be considered from the resource based view for formulating technology deployment decisions. The adoption of two extreme measures—completely open for a competitive structure or completely closed for a vertically integrated structure—would not be sufficient for obtaining a long-term competitive advantage. Therefore, under certain conditions, an innovator must focus on the continuous improvement of a particular technology so that it may benefit from both network effects and protection from future entrants. If the network of the innovator is not strong enough to withstand subsequent disruptive innovation [25], the innovator cannot depend on the network effects to keep its dominant position. Only firms with an extremely high strategic sustainability owing to the uniqueness of their technology may enjoy a durable benefit on account of their growing their user-base. The strategic shift of Intel's main business from DRAMs (dynamic random access memory) to microprocessors corresponds perfectly to this scenario [6]. Initially, Intel manufactured other semiconductor components, for example, memory chips such as RAMs and ROMs; however, it subsequently decided to focus on producing microprocessors. Rafii and Kampas [25] emphasized that Intel's main business possesses an extremely high entry barrier at every stage of the entrants' disruption trial, from foothold market entry to incumbent disruption. As summarized in this paper, success in the high-tech industry depends on the firm's strategic choices regarding proprietary control as well as the utilization of the network effects. The dominant trend of modular production in the contemporary high-tech industry needs to be re-examined from this perspective. Numerous innovators focus on product design and sales by outsourcing the manufacturing process to external turn-key suppliers of intermediate goods [30]. Even though numerous studies on modular production emphasize the cost benefit of outsourcing the production of non-core components, we distinctively emphasize the importance of successfully managing core components for ensuring the sustainability of business success.