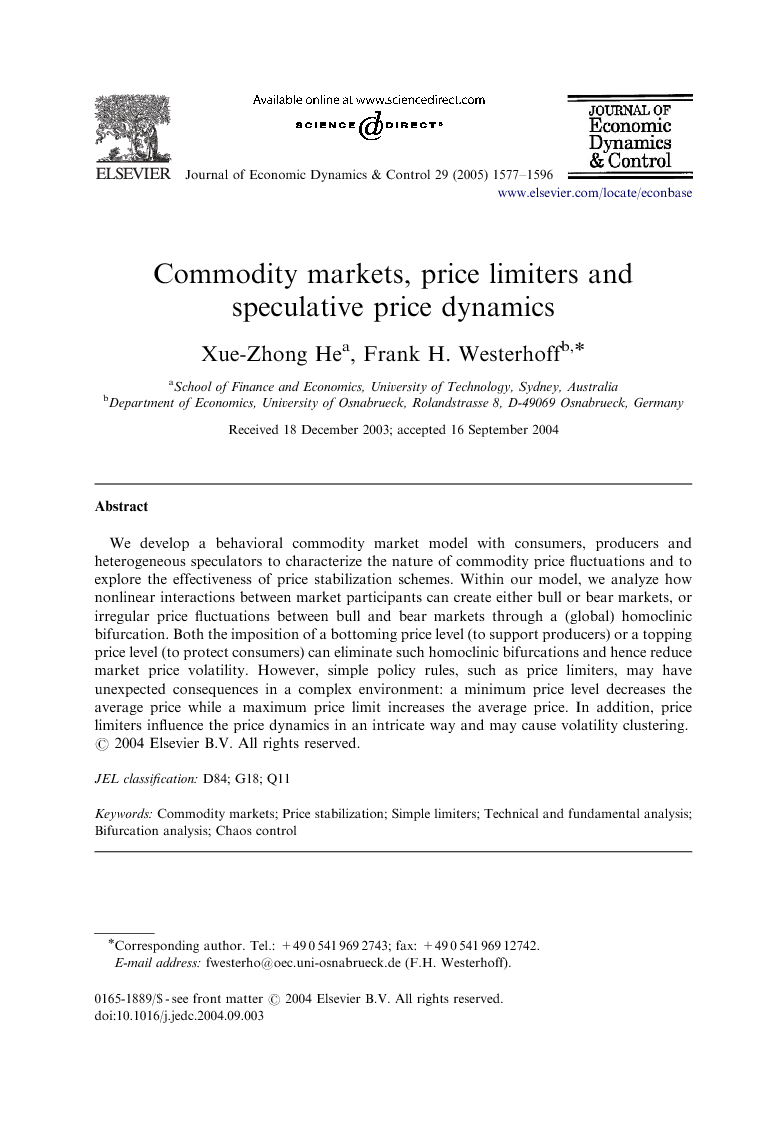 We develop a behavioral commodity market model with consumers, producers and heterogeneous speculators to characterize the nature of commodity price fluctuations and to explore the effectiveness of price stabilization schemes. Within our model, we analyze how nonlinear interactions between market participants can create either bull or bear markets, or irregular price fluctuations between bull and bear markets through a (global) homoclinic bifurcation. Both the imposition of a bottoming price level (to support producers) or a topping price level (to protect consumers) can eliminate such homoclinic bifurcations and hence reduce market price volatility. However, simple policy rules, such as price limiters, may have unexpected consequences in a complex environment: a minimum price level decreases the average price while a maximum price limit increases the average price. In addition, price limiters influence the price dynamics in an intricate way and may cause volatility clustering.

This paper is concerned with commodity price dynamics. Actual commodity prices fluctuate strongly: Not only is the price volatility high,but also severe bubbles and crashes regularly emerge. Hence,this topic is of great practical importance, particularly for the formulation of economic policy. Although producers and consumers are two primary participants in commodity markets,there are also other participants,such as speculators,who may have a marked effect both on the degree of price variability and on the success of any commodity price stabilization scheme. Within our model,inter actions between heterogeneous agents create complex bull and bear market fluctuations,which resemble the cyclical price dynamics of many commodity markets. Our model shows that: (i) the chartists are a source of market instability,as commonly believed; (ii) weak reaction of the speculators (either the fundamentalists or the chartists) can push the market to be either a bull or a bear market (through pitchfork bifurcations); and (iii) strong reaction of the speculators causes market prices to fluctuate irregularly between bull and bear markets (through homoclinic bifurcations). Furthermore,we investigate how price boundaries,which function identically to a recently suggested chaos control method,affe ct the price dynamics. We find that simple price limits (i) reduce the variability of prices quite strongly,(ii) are likely to shift the price in an adverse direction and (iii) may lead to an unsustainable buffer stock. The results are caused by a dynamic lock-in effect. By restricting the evolution of the price,the dynamics may become stuck in either the bull or the bear market. However,jumpi ng between bottoming and topping price limiters allows a central authority to manage the evolution of the buffer stock. Prices are then temporarily stabilized in the bull market or the bear market. But it should not be overlooked that whenever a central authority introduces a price stabilization scheme it changes the price discovery process. For instance,price limiters may trigger marked bubbles and crashes or volatility clustering. The study of heterogeneous interacting agents has yielded a number of quite sophisticated models which have proven to be quite successful in explaining financial market dynamics. Our simple commodity market model is inspired by this approach and we would finally like to point out some interesting extensions. First of all,one may consider some other popular technical trading rules. For example,agents are often reported to extrapolate the most recent price trend. Moreover,as argued in Chiarella (1992) or Farmer and Joshi (2002),techni cal analysis may be nonlinear. Secondly,agents may involve some adaptive learning processes when choosing a particular trading strategy. For example,the behavior of chartists and fundamentalists may not be constant over time with respect to their reaction coefficients,and , although agents are boundedly rational,they may try to learn those coefficients. Alternatively,agents ’ expectations may follow some adaptive learning processes. Thirdly,agents may incorporate other switching mechanisms. As argued in Brock and Hommes (1998),one may assign each forecast rule a fitness function (which may depend on the historical performance of the rules) and then let the agent select a rule according to its fitness. Higher complexity may also be achieved by switching from a two-speculator type analysis to a real multi-agent market model (Lux and Marchesi, 2000). Of course,the behavior of both the producers and consumers may also be modeled in more detail. For instance,the producers may base their production decision on expected future prices and thus select between different kinds of forecast rules,as modeled in Brock and Hommes (1997). Finally,the working of different price limiter schemes may also be tested in a laboratory setting. Promising work on experimental asset pricing markets has been done by Smith (1991) or Sonnemans et al. (2004).