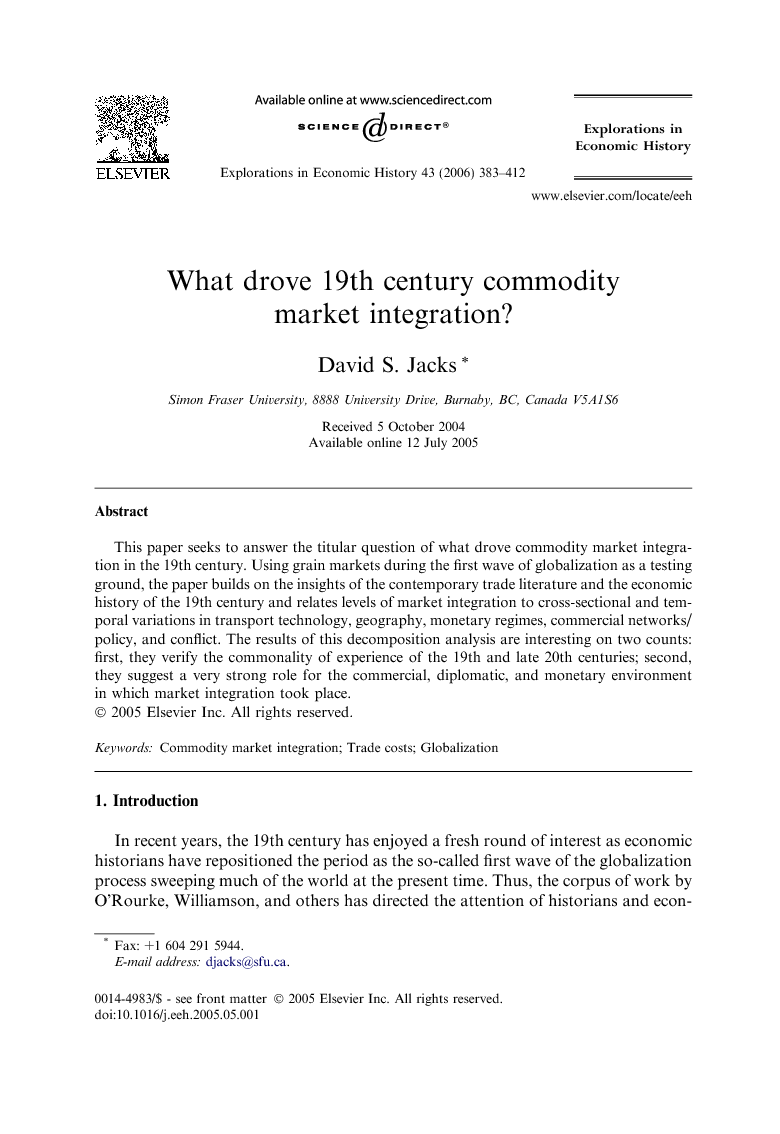 This paper seeks to answer the titular question of what drove commodity market integration in the 19th century. Using grain markets during the first wave of globalization as a testing ground, the paper builds on the insights of the contemporary trade literature and the economic history of the 19th century and relates levels of market integration to cross-sectional and temporal variations in transport technology, geography, monetary regimes, commercial networks/policy, and conflict. The results of this decomposition analysis are interesting on two counts: first, they verify the commonality of experience of the 19th and late 20th centuries; second, they suggest a very strong role for the commercial, diplomatic, and monetary environment in which market integration took place.

In recent years, the 19th century has enjoyed a fresh round of interest as economic historians have repositioned the period as the so-called first wave of the globalization process sweeping much of the world at the present time. Thus, the corpus of work by O’Rourke, Williamson, and others has directed the attention of historians and economists alike back to this time of unprecedented—and in many respects, unsurpassed—integration of global commodity, capital, and labor markets (O’Rourke and Williamson, 1999). Historical accounts as well as popular conceptions of the long 19th century (1800–1913) have generally stressed the singular role played by developments in transportation and communication technologies in conquering time and space, creating in their wake commodity markets of immense scale. Nowhere was this transformation thought to have been more readily felt than in the newly settled frontier of the United States and in the emergent nation states of Europe, namely Germany, Italy, and Russia. In this account, the dynamic twins of the railroad and telegraph take pride of place in creating economically and socially unified national polities while the wholesale adoption of steam propulsion in the maritime industry plays a similar role with respect to international markets (see James, 2001, pp. 10–13). In light of this position, the question which this paper seeks to answer is what were the proximate causes of the evolution of commodity market integration in the 19th century? Building on the insights provided by the contemporary trade literature and the economic history of the 19th century, the paper uses evidence from grain markets in over 100 cities to first construct measures of intra- and international commodity market integration and then decompose cross-sectional and temporal variations in the measures with information on transport, geographic, monetary, commercial, and diplomatic linkages. The first fundamental result is that the findings presented below can be aligned with results for the late 20th century, verifying the commonality of the two waves of globalization. Additionally, the economic history literature allows for the identification of further variables, which have been relatively underrepresented in the contemporary trade literature: technological change in the transport sector; enduring, trade-enhancing geographical features associated with navigable waterways; the choice of monetary regime and commercial policy; and intra- and interstate conflict. Second, econometric analysis of temporal and cross-country variation in trade costs (roughly, the size of price differentials) and speeds of price adjustment (roughly, the speed at which profitable price differentials are arbitraged away) points to the fact that two different combinations of causal factors predominate in each case. Surprisingly, variables associated with the state of the diplomatic environment and the choice of commercial policy and monetary regime are estimated to have the largest effects on trade costs.