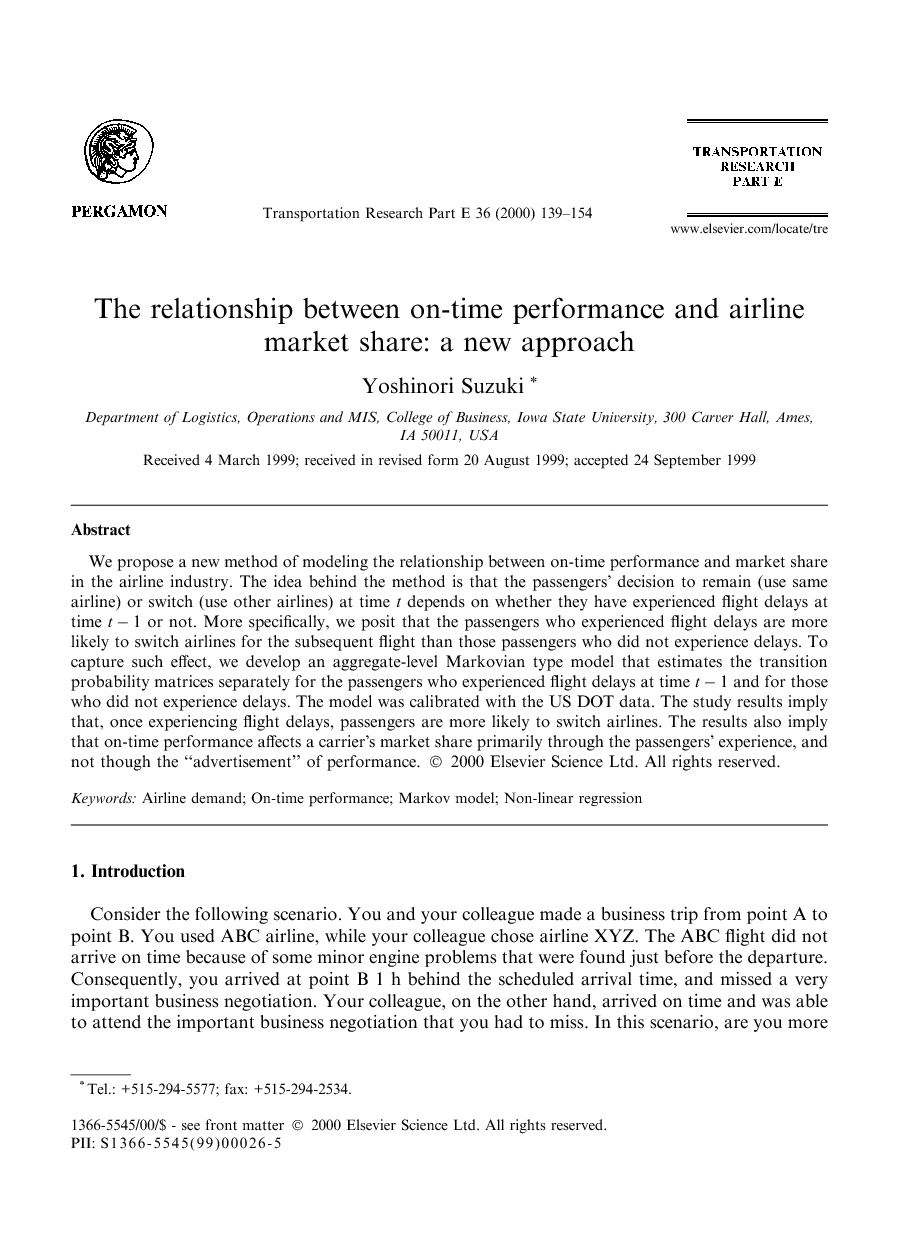 Consider the following scenario. You and your colleague made a business trip from point A to point B. You used ABC airline, while your colleague chose airline XYZ. The ABC flight did not arrive on time because of some minor engine problems that were found just before the departure. Consequently, you arrived at point B 1 h behind the scheduled arrival time, and missed a very important business negotiation. Your colleague, on the other hand, arrived on time and was able to attend the important business negotiation that you had to miss. In this scenario, are you more likely to switch to another airline for the next business trip than your colleague? Most likely, the answer is “Yes”. The above example shows that the passengers’ choice of airlines may be affected by the on-time arrival experience of passengers. This example also suggests that the passengers may show stronger reaction (switch to other airlines) when they experience utility losses (service level below their expectation) than when they experience utility gains (service level above their expectation). This type of asymmetric pattern in human response to gains and losses is known as the loss aversion (Tversky and Kahneman, 1991), and was recently introduced to the transportation literature by Suzuki and Tyworth (1998). Simply put, the property of loss aversion suggests that human beings evaluate product/service quality relative to a certain reference point (e.g., expectation), and give heavier weights to the losses (negative deviations from the reference point) than to the equivalent-sized gains (positive deviations). Although developed recently, the property of loss aversion is supported by significant empirical evidence. For example, a recent empirical study by Hardie et al. (1993) utilized the concept of loss aversion in their multinomial logit model of consumer brand choice, and showed that the model performance can be improved significantly by incorporating the loss aversion effect. The loss aversion property seems to have potential for providing important managerial implications in the air transportation area, especially for gaining deeper insights into the nature of the relationship between airline demand and customer service quality such as on-time performance. The loss aversion property, however, has not been utilized in the studies of airline demand. A typical approach to modeling the effect of on-time performance on airline passenger demand is to express a carrier’s sales (or market share) as a function of the carrier’s on-time performance and other exogenous variables. Both linear and non-linear specifications are widely used. Examples of this approach include the studies by Dresner and Windle, 1992, Nako, 1992, Ghobrial and Soliman, 1992, Dresner and Xu, 1995, Proussaloglou and Koppelman, 1995 and Yoo and Ashford, 1996 and Suzuki (1998). This approach, however, implicitly assumes that all passengers are homogeneous, i.e., all of the passengers show identical airline choice behaviors at time t regardless of whether they have experienced flight delays at time t−1 or not. This condition indicates that, if passengers are loss averse, the existing models will not capture the portion of data variance that is explained by the passengers’ loss aversion tendencies. In this paper we model the aggregate-level relationship between airline market share and on-time performance by using the framework that captures the effect of passenger loss aversion. To incorporate the loss aversion tendencies of airline passengers, we formulate a model that permits separate estimation of airline choice probabilities for the passengers who experienced flight delays at time t−1 and for those who did not. Although a model that possesses such a characteristic may best be constructed by using a discrete choice (disaggregate) modeling framework, we do not employ this approach for a practical reason. The disaggregate models can incorporate individual heterogeneity and may be more appropriate for modeling choice behaviors, but its use in the airline industry is difficult because of data unavailability. If using disaggregate choice models, one must use the data that are collected from a group of people over time (panel data), which probably are not available in the airline industry. The aggregate models, on the other hand, can be estimated by using the available data, such as the aggregate passenger travel data published by the US DOT. This condition implies that our model may be used quite conveniently by the airline management.

We have proposed an aggregate-level model of on-time performance and market share for air carriers. A unique aspect of the model is that it estimates the transition probability matrices separately for the passengers who experienced Øight delays in month t ˇ 1 and for those who did not experience delays. Because of this characteristic, the model can capture the loss aversion eect of on-time performance on market share. The model, when calibrated with the US DOT data, showed several interesting Ændings. First, passengers are likely to be loss averse with respect to on- time performance. The results indicate that, for all carriers included in our data set, the switching rate of passengers with delay experience is higher than that of passengers without delay experi- ence. Second, when passengers switch airlines, their choices may be aected by the airport dominance, but not by other airline attributes. This pattern implies that airlines that possess greater dominance at origin and/or destination airports may attract more switchers. Third, the estimation results imply that on-time performance aects an airline ’ s market share through the passengers ’ experience, but not though the ``advertisement'' of performance. Note, however, that we do not propose generalization of these results, for the model was estimated by using only a single-route data. Data analysis for more routes and airlines is required in the future. The model has its limitations. First, the model assumes that the switching rate parameters ( k L i and k G i ) are stationary (constants). It is possible, however, that a passengers ’ decision to stay or switch from a particular carrier is not only a function of delay/non-delay experience, but also a function of other variables such as the airport dominance of the carrier in question. An interesting extension of the model, therefore, is to formulate a model where k L i and k G i would be treated as non-stationary by expressing them as functions of some exogenous factors. Second, our model ’ s deÆnition of ``on-time arrival'' is rather arbitrary. In our model, the Øights are considered as ``on-time'' if arriving at the destination airport within 15 min of scheduledarrival time, but are considered as ``delayed'' otherwise. Although this deÆnition is also used by the US DOT (and by many other airline studies: e.g., Dresner and Xu, 1995; Suzuki, 1998), it may not represent the true deÆnition of ``on-time arrival'' as perceived by the passengers. The future research may want to explore this issue by estimating our model with alternative deÆnitions of ``on-time arrival'' (e.g., 10 min behind schedule, 20 min behind schedule, etc.), and examining which deÆnition provides the best Æt to empirical data (provided that the on-time data for al- ternative deÆnitions are available). Third, the model assumes that the number of passengers who did not experience Øight delays can be approximated by multiplying the market share and the on-time performance (e.g., S kt ˇ 1 Q kt ˇ 1 represents the passengers who used airline k in month t ˇ 1 and did not experience Øight delays). As mentioned previously, this assumption is valid only if airlines use approximately the same Øeet sizes and/or loads in a given route. This condition may be true in many routes, for carriers generally use the Øeets that match the route demand (e.g. use smaller airplanes for low- demand routes). This condition, however, may not hold for some routes and/or carriers. It may be necessary to test the validity of this assumption empirically in the future. Fourth, the model assumes that all passengers have approximately the same inter-travel time (one month). Although this type of assumption is used in virtually all of the market share models (in particular the aggregate-level Markovian models), the model suers from this assumption because the model is only as strong as the ``one-month'' inter-travel time assumption is valid (i.e., if the assumption does not hold, the study results may have to be interpreted dierently). We made the ``one-month'' inter-travel time assumption by referring to both anecdotal and empirical evidence, but more empirical evidence may be needed to support the use of this assumption in empirical analyses. In sum, our model should be considered as an aggregate model of airline demand and on-time performance that also provides, to some degree, insights into the passengers ’ carrier switching and non-switching behaviors. The model does not substitute for disaggregate models of airline choice. Rather, our framework should be viewed as a ``quick and dirty'' method of approximating the passengers ’ airline switching behaviors from the available (aggregate) data. Our approach, however, may become a useful tool for investigating the nature of the relationship between on- time performance and market share by using the available data