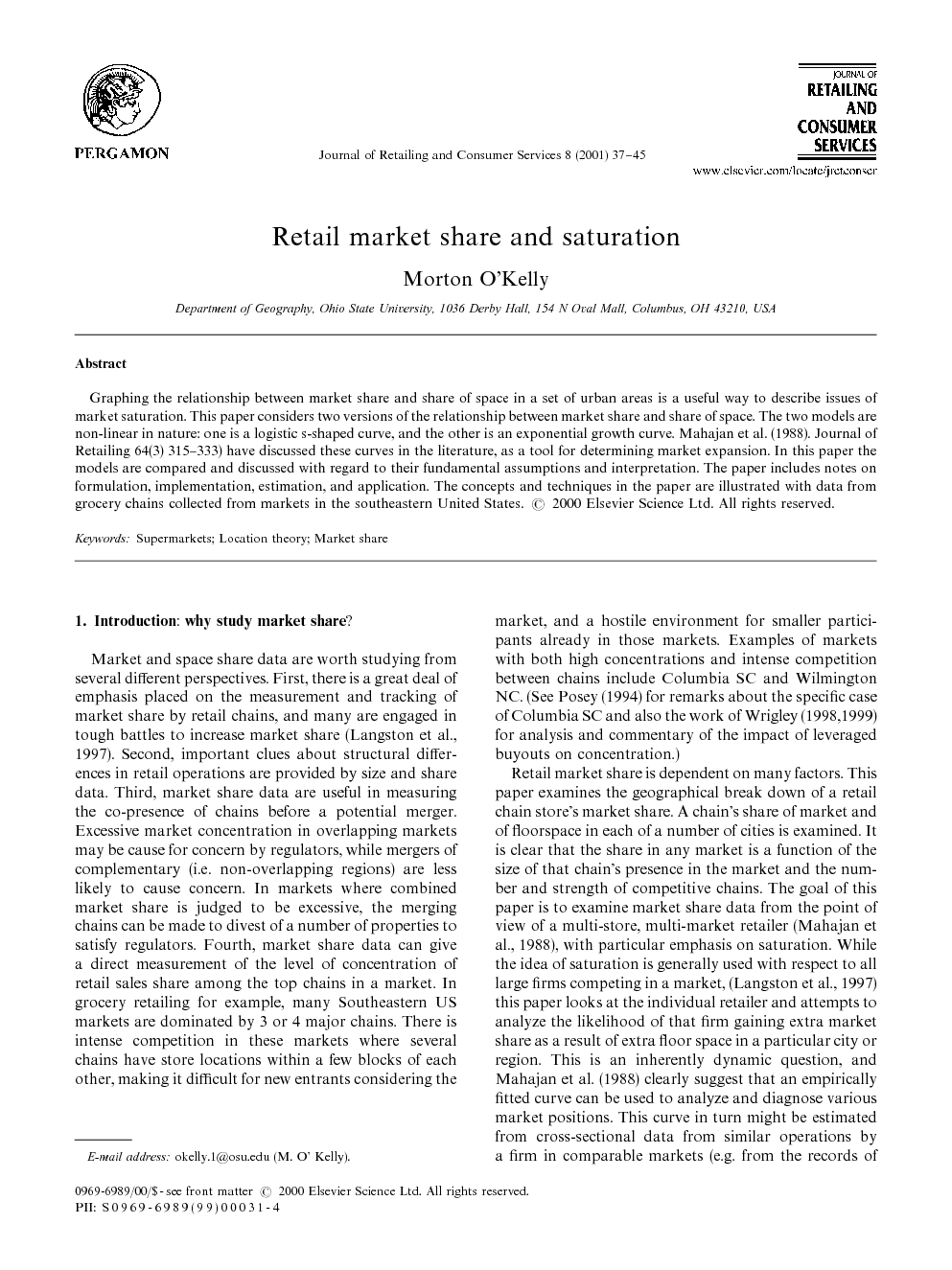 Graphing the relationship between market share and share of space in a set of urban areas is a useful way to describe issues of market saturation. This paper considers two versions of the relationship between market share and share of space. The two models are non-linear in nature: one is a logistic s-shaped curve, and the other is an exponential growth curve. Mahajan et al. (1988). Journal of Retailing 64(3) 315–333) have discussed these curves in the literature, as a tool for determining market expansion. In this paper the models are compared and discussed with regard to their fundamental assumptions and interpretation. The paper includes notes on formulation, implementation, estimation, and application. The concepts and techniques in the paper are illustrated with data from grocery chains collected from markets in the southeastern United States.

Market and space share data are worth studying from several different perspectives. First, there is a great deal of emphasis placed on the measurement and tracking of market share by retail chains, and many are engaged in tough battles to increase market share (Langston et al., 1997). Second, important clues about structural differences in retail operations are provided by size and share data. Third, market share data are useful in measuring the co-presence of chains before a potential merger. Excessive market concentration in overlapping markets may be cause for concern by regulators, while mergers of complementary (i.e. non-overlapping regions) are less likely to cause concern. In markets where combined market share is judged to be excessive, the merging chains can be made to divest of a number of properties to satisfy regulators. Fourth, market share data can give a direct measurement of the level of concentration of retail sales share among the top chains in a market. In grocery retailing for example, many Southeastern US markets are dominated by 3 or 4 major chains. There is intense competition in these markets where several chains have store locations within a few blocks of each other, making it difficult for new entrants considering the market, and a hostile environment for smaller participants already in those markets. Examples of markets with both high concentrations and intense competition between chains include Columbia SC and Wilmington NC. (See Posey (1994) for remarks about the specific case of Columbia SC and also the work of Wrigley, 1998 and Wrigley, 1999 for analysis and commentary of the impact of leveraged buyouts on concentration.) Retail market share is dependent on many factors. This paper examines the geographical break down of a retail chain store's market share. A chain's share of market and of floorspace in each of a number of cities is examined. It is clear that the share in any market is a function of the size of that chain's presence in the market and the number and strength of competitive chains. The goal of this paper is to examine market share data from the point of view of a multi-store, multi-market retailer (Mahajan et al., 1988), with particular emphasis on saturation. While the idea of saturation is generally used with respect to all large firms competing in a market, (Langston et al., 1997) this paper looks at the individual retailer and attempts to analyze the likelihood of that firm gaining extra market share as a result of extra floor space in a particular city or region. This is an inherently dynamic question, and Mahajan et al. (1988) clearly suggest that an empirically fitted curve can be used to analyze and diagnose various market positions. This curve in turn might be estimated from cross-sectional data from similar operations by a firm in comparable markets (e.g. from the records of many stores, clustered into cities in a homogeneous region). Such an analysis might give some basic idea about the way that a firm's market position varies with different levels of floor space share. This movement back and forth between cross-sectional data and dynamic interpretations certainly poses some difficulty, but this paper attempts to make these interpretative connections. Many complex issues are sidestepped here, but are recognized as fruitful avenues for further research: for example, it is assumed throughout that the aggregate size of the market in an area is held fixed, though in reality creative retailing strategies can create a larger total demand. Further while some discussion of differential locational strategies by firms is provided, the full extent of interdependence between the actions of multiple players in a market are not considered. We take the viewpoint of a single operator playing a zero sum game against a homogeneous opponent, though in reality retail competition and saturation undoubtedly create a much more complex set of outcomes. This paper considers issues of retail market share in the context of two specific versions of the relationship between market share and share of space. The two models are non-linear in nature: one is a logistic s-shaped curve, and the other is an exponential growth curve. The sections of the paper are in the following order: model formulations (emphasizing basic assumptions); implementation; estimation; interpretation and applications. The paper works with empirical measures of sales and space share as aggregated from individual store sales estimates in selected Southeastern US markets. The ideas are illustrated with data from 53 SE US market areas using retail grocery data. Among the major participants in these markets are Winn Dixie, Harris Teeter, Food Lion, Bilo, Kroger, and Ingles. To preserve the confidentially of the data the specific chains and place names will not be detailed.

This paper has demonstrated using some elementary mathematics that there are a number of useful interpretative and analytical results that may be obtained from the s-curve model of retail saturation. Of course the perspective here is from the point of view of a single firm with multiple branches in a set of cities, and so for each of these situations the individual chain regards the increases or changes in its sales as coming at the expense of other retailers. For this chain the notion of saturation is different from that likely to be espoused by a regulator or a planner. A planner might regard the overall picture as showing that there are too many stores (of all kinds). Lord (1998) treats these other issues of saturation. The results in this paper show that an exponential growth curve fits the data for a particular example, and that the fitted relationship can be used to generate an expansion path for an individual firm, operating in a particular market. While further work is clearly called for to generalize the ideas in this paper (for example to include interdependence between firms, and to make total demand endogenous), the results form a basis for attacking questions of interfirm competition. The techniques and measures developed in this paper would allow a retail analyst to judge the degree of overlap between chains in multiple markets. The recent upsurge of mergers and acquisitions (consolidation) in grocery retailing in the US, makes these issues of measurement and modeling particularly relevant and timely.