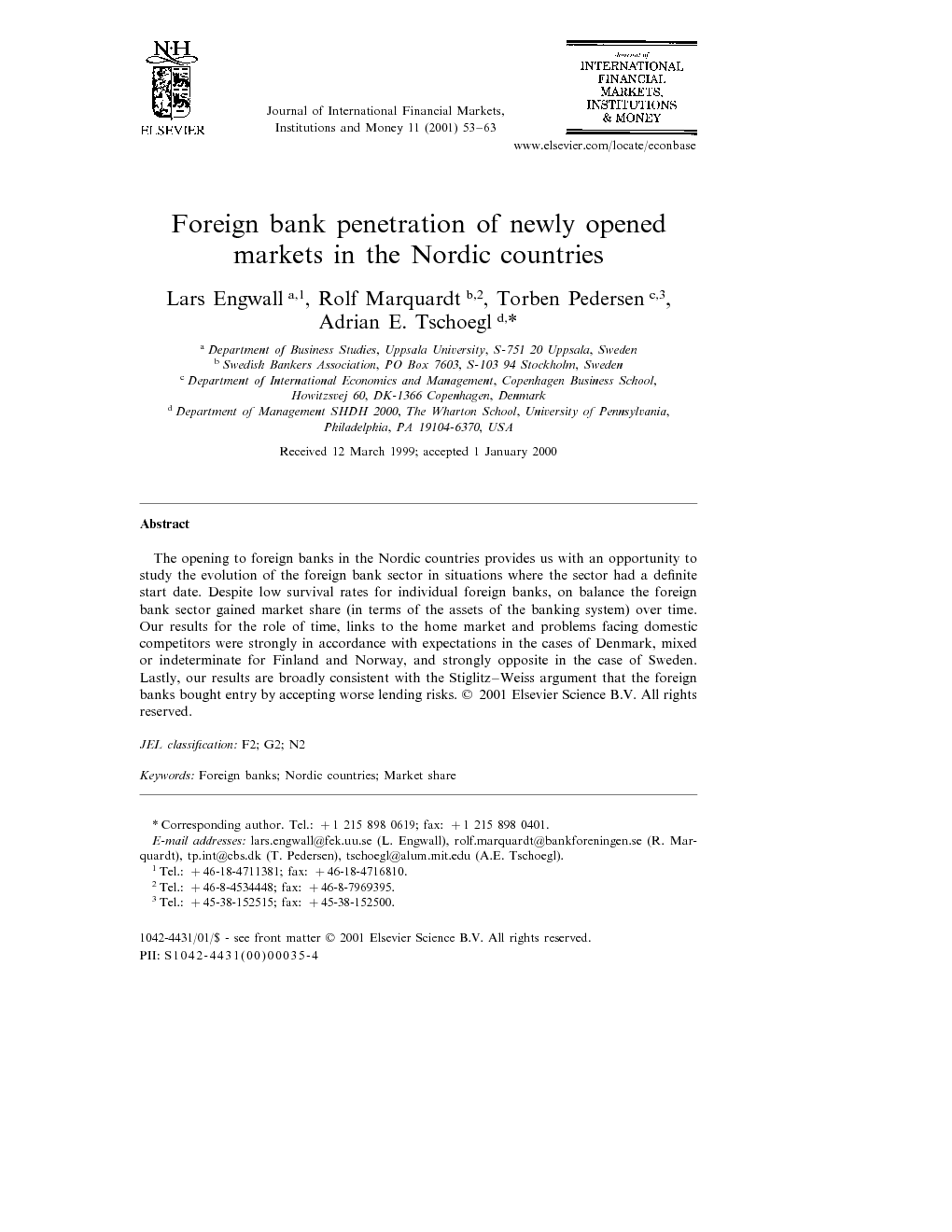 The opening to foreign banks in the Nordic countries provides us with an opportunity to study the evolution of the foreign bank sector in situations where the sector had a definite start date. Despite low survival rates for individual foreign banks, on balance the foreign bank sector gained market share (in terms of the assets of the banking system) over time. Our results for the role of time, links to the home market and problems facing domestic competitors were strongly in accordance with expectations in the cases of Denmark, mixed or indeterminate for Finland and Norway, and strongly opposite in the case of Sweden. Lastly, our results are broadly consistent with the Stiglitz–Weiss argument that the foreign banks bought entry by accepting worse lending risks.

In 1971 Denmark deregulated its domestic banking markets and the entry of foreign banks. Only one foreign bank entered initially and the number of foreign banks grew slowly over time. Finland opened next (1978) but no foreign banks entered until four years later when further deregulation made entry attractive. Norway (1984) and Sweden (1985) opened more than a decade after Denmark and a number of banks all entered at once. Today, after falling from its peaks, the number of foreign banks and their share of each country's banking system assets are recovering. In Finland, Norway and Sweden, especially when acquisitions of domestic banks are involved, the number and market share represent a new peak. The opportunities for the foreign banks did not develop slowly with the evolution of an economy or a technology but suddenly (though with forewarning) when governments removed their barriers. In all four countries, opening to foreign banks accompanied a more general deregulation that resulted in competitive turbulence. The authorities welcomed the foreign banks for the competition and new capabilities they brought to the domestic market. However, the authorities were also concerned about the effect of the entrants on monetary policy, credit control and the soundness of the existing domestic banks. The foreign entrants were particularly able to take advantage of the openings. They were offshoots of their parent banks: large, internationally well-known organizations. As such the entrants were not subject to many of the hurdles facing totally new firms. However, they were still subject to the liability of foreignness and the need to establish relationships with clients. Our objective is to examine the determinants of the evolution of the foreigners’ market share of the assets of the banking system as a whole, not the survival and success of individual banks. In Section 2 we discuss the limited literature on the evolution of the market share of foreign banks, which is slim but does suggest hypotheses amenable to testing. In Section 3 we formulate three hypotheses regarding the determinants of the foreign bank sector's share of the assets of the banking system. We relate the foreign banks’ market share in each of the four countries to a time trend, to each host country's trade balance, and to the banking system's loan loss experience. The first variable captures learning and selection. The second proxies for access to business related to the foreign banks’ access to their home markets. The last captures the effect of a possible crisis-induced lack of competitiveness of the host-country banks. In Section 4 we discuss the data and methodology. In Section 5 we present the results of testing our model. In Section 6 we conclude the paper by comparing and contrasting the experiences of the foreign bank sector in the four environments, by pointing out some limitations of the analysis, and by discussing some current developments that are changing the face of the Nordic banking scene. In an appendix available from the corresponding author we discuss the regulatory and economic environment that the foreign banks faced in the Nordic countries at entry and after. We also present the basic data on the development of the foreign bank sector in Denmark, Finland, Norway and Sweden that we use in our analysis.

In all four Nordic countries, the survival rate among the initial foreign entrants appears low. From peak to trough, the number of foreign banks fell by a third to a half, depending on the country. Since then, in Finland and Sweden the number has rebounded to a new peak. Denmark and Norway have seen more modest rebounds. However, even where the market share of the foreign banks as a wholecurrently is below its peak, individual foreign banks have done well. In each country, the ranking among all banks of the largest foreign bank has increased. One cannot make too much of this; a simple Gibrat (stochastic growth) process with an absorbing barrier on the left would tend to give this result (Sutton 1997). These observations are consistent with Geroski’s (1995) stylized fact number 4 which states ‘‘The survival rate of most entrants is low and even successful entrants may take more than a decade to achieve a size comparable to the average incumbent.’’ This congruence between our results and those of other entry studies is striking in that our entrants are not new firms in the same sense as in most of those studies. This suggests that the liability of foreignness may be as great a handicap as the liability of newness. Still, the issue in this paper is not survival of individual banks but rather the evolution of the foreign bank sector. In all four countries, the market share of the foreign banks has increased over time. Foreign banks gained the largest market share in Finland and Norway, but this owes much to the acquisition of local firms. Only Denmark has been immune to cross-border acquisitions, due probably in large part to impediments to hostile takeovers, and the lack of a banking crisis large enough to force the issue. Absent acquisitions of domestic banks, the foreign bank sector has not carved out a large role in any of the four Nordic countries. This result is consistent with what we would expect for mature, concentrated markets. In our data, the results for Denmark conformed to our expectations. The results for Finland and Norway were indeterminate. The results for Sweden were perverse. The difference is congruent with differences in the elapsed time since opening; to recapitulate, the order of opening to foreign banks was Denmark, Finland, Norway and Sweden. The results are not strong enough for us to more than conjecture that the reason may be changes in the identities and motives of the entrants over time. The variable for time had the expected positive sign for all countries but Sweden with the strongest effect in Denmark. However, we cannot associate this with changes in concentration. At the 4-firm level, Denmark saw almost no increase in concentration and Sweden saw the greatest increase. However, at the 2-firm level, Finland saw the largest increase, followed closely by Norway and then Sweden. The cross-sectional correlation between the change in the foreign banks’ market share and the change in the 4-firm (2-firm) concentration ratio over the periods in the data is 0.2 (0.2). As far as the link to trade is concerned, the results were mixed. The foreigners’ share moved against the balance (as expected) in Denmark and Norway. It moved with the balance (but contrary to our expectations) in Finland and Sweden. Lastly, except in Denmark, the foreign banks’ share of domestic banking system assets expanded and contracted as the domestic banks expanded and contracted. There is anecdotal evidence that the foreign banks came to dominate wholesale banking in Finland during the crisis, but that will not show up in our data. In Finland, Norway and Sweden, the foreign banks lost aggregate market share even as the domestic banks suffered loan losses. This is consistent with the Stiglitz – Weiss argument that new entrants may have to take on less creditworthy customers on their books as they seek to establish themselves. The result was that the foreignbanks’ loan portfolios were more vulnerable than those of the domestic banks when the crisis came and the foreign banks, though perhaps more able to lend than the domestic banks, were perhaps less willing to do so. The mid-1990s are seeing the emergence of a Nordic strategy among the Nordic banks. Now, Nordic banks are penetrating each other’s markets. As far as entering the retail market is concerned, the Nordic banks have an advantage relative to other foreigners because of linguistic and cultural similarities, and the common structure of the Nordic societies (Nordstro ̈ m and Vahlne, 1994). Jacobsen and Tschoegl (1999) also argue that the deregulation of entry undermined the Nordic consortia that the largest Nordic banks had formed, which incorporated explicit or implicit agreements among the members not to enter each other’s markets. Today we are seeing an increase in cross-border mergers and acquisition in banking. Our results and the questions they raise constitute a call for further research on this increasingly important phenomenon.