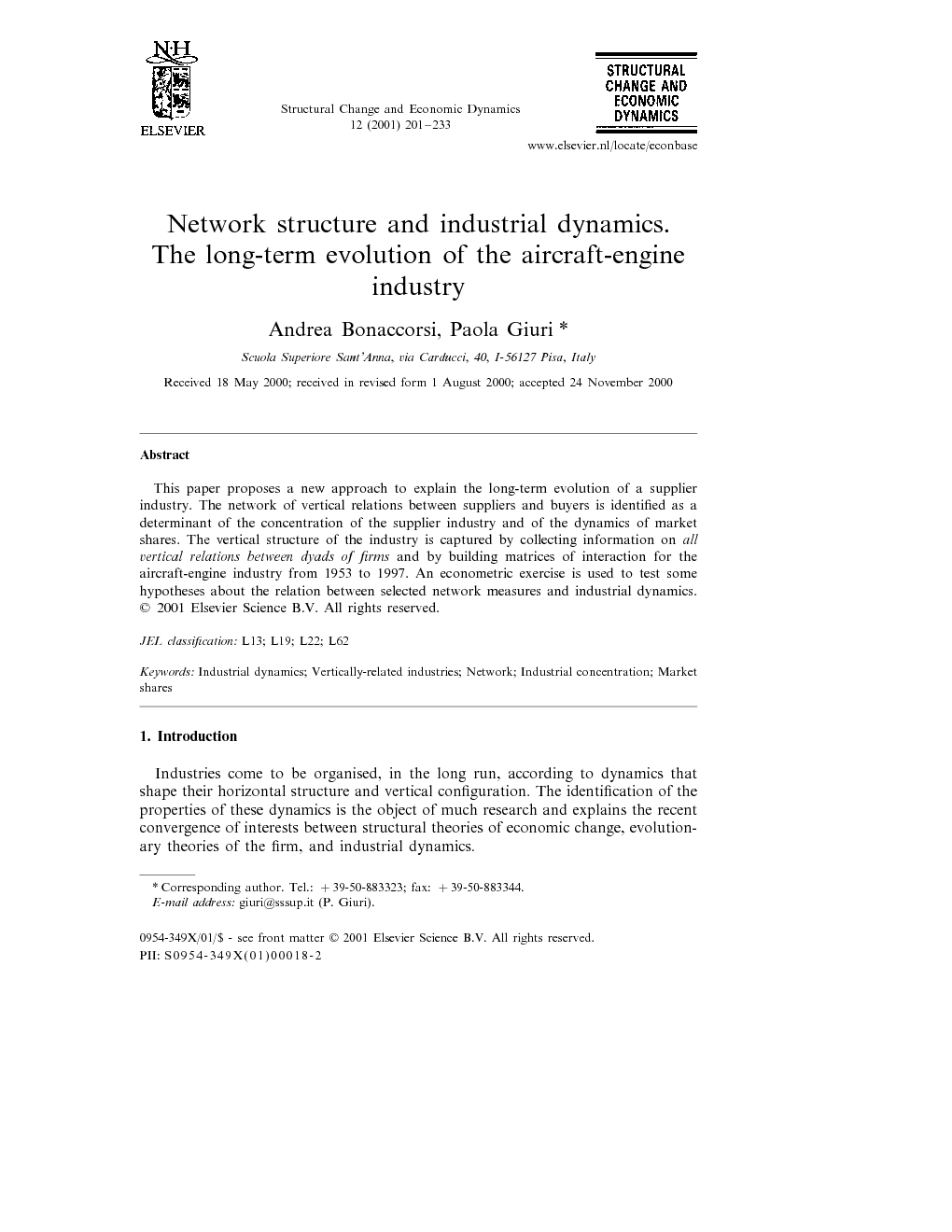 This paper proposes a new approach to explain the long-term evolution of a supplier industry. The network of vertical relations between suppliers and buyers is identified as a determinant of the concentration of the supplier industry and of the dynamics of market shares. The vertical structure of the industry is captured by collecting information on all vertical relations between dyads of firms and by building matrices of interaction for the aircraft-engine industry from 1953 to 1997. An econometric exercise is used to test some hypotheses about the relation between selected network measures and industrial dynamics.

Industries come to be organised, in the long run, according to dynamics that shape their horizontal structure and vertical configuration. The identification of the properties of these dynamics is the object of much research and explains the recent convergence of interests between structural theories of economic change, evolutionary theories of the firm, and industrial dynamics. Within this context, the problem of identifying the specific mechanisms that relate the horizontal dynamics of an industry (entry, exit, survival and growth of firms, stability of market shares, firm size distribution) to the vertical dynamics (vertical integration/disintegration or change in the division of labour, industrial dynamics in upstream/downstream sectors) is of much interest. While a certain amount of empirical evidence has been collected on this problem, and some general models have been developed, much work remains to be done. We propose that the notion of network of relations between suppliers and users captures the vertical organisation of an industry. The originality of this paper lies in the use of economic network time series for the explanation of the long-term dynamics of a supplier industry. We study the relations between engine and aircraft manufacturers in the jet and turboprop markets. The vertical structure of the industries is captured by collecting information on all vertical relations between dyads of firms, by building matrices of interaction for the entire industries during the period 1953–1997, and by computing selected network measures at the industry and at the firm level. We develop the hypothesis that the structural dynamics of the supplier industry, as represented by the evolution of the level of concentration and the dynamics of market shares, depend on the way vertical relations are created and distributed among actors. We take into account specific factors underlying the creation of linkages between the firms in the two industries and formulate different hypotheses about the sign of the relation between network and industry measures. The question we try to answer is the following: can the distribution of vertical relations in two vertically-related industry affect the level of concentration and the dynamics of firms' market shares of the supplier industry? An econometric analysis is carried out to test the hypothesis that, depending on the characteristics of the distribution of relations in the networks, relational density has a different impact on the level of concentration of the supplier industry. More precisely, in oligopolistic regimes characterised by asymmetries among actors in relational behaviour, relational density has a positive effect on concentration, while in oligopolistic regimes in which actors follow symmetric relational behaviours, the sign of the relation is negative. As for the firm level, we propose that actor centrality explains market share, but the intensity of the relation depends on characteristics of vertical linkages and on the size distribution of firms in the downstream industry. The paper is organised as follows. Section 2 offers a brief review of existing contributions on the dynamics of vertically-related industries. It introduces the notion of network and discusses the potential of network concepts and techniques in industrial economics. Section 3 introduces data, methodology and descriptive statistics of the variables used in the empirical analysis, while Section 4 develops the hypotheses of the model. Section 5 presents an econometric analysis and Section 6 concludes.

This analysis forms the starting point of an empirical paradigm which uses time series data describing economic network variables for the study of the relationship between the horizontal and vertical dimensions of industry structure and dynamics. With respect to the tradition of use of the network concept and techniques in industrial economics, we propose new directions in three respects. First, we focus on vertical relations rather than horizontal agreements. Second, it is not only the structure of networks which is investigated but the dynamics over time as well. Third, we explore the linkage between the dynamics of networks and industrial dynamics (for an initial suggestion in this direction see Orsenigo et al., 1998, 2000). We made some substantive assumptions regarding the process underlying the creation of linkages and the distribution of quantities, which derive from theories of industrial dynamics applied to speci fi c industry contexts. The econometric analysis supports many of the hypotheses and highlights interesting differences between jet and turboprop markets.In the jet market, characterised by the presence of a competitive core in the network, concentration is negatively related to the density of the core and posi- tively related to the group centralisation, while in the turboprop industry concen- tration is explained only by density. These fi ndings re fl ect differences in the competitive regimes of the two markets. Both are oligopolistic, but the jet engine industry experienced a marked intensi fi cation of competition and a decline in the level of concentration. At the fi rm level, the relation between actor centrality and market shares is signi fi cant in many cases. In the turboprop industry, the rela- tion is more signi fi cant, as the size distribution of the downstream industry is less skewed. A promising future research direction is the reformulation of several concepts in industrial dynamics (including technological regimes and market demand regimes) in terms of the implied relations between network measures and indus- try measures. Admittedly, this approach can be adopted mainly for industries that sell indus- trial products, in which the number of producers and customers can be quanti fi ed reasonably accurately. Although this is a limitation, it is worth re- calling that industrial markets account for the majority of value added at the world level. In addition, the approach can be used for consumer industries in which the retail trade sector is concentrated. A possible objection to our proposed methodology might stress that the use of relational concepts and measures ignores the oligopolistic nature of the two industries, with just a few actors playing strategically in the market. As was shown in the paper, in industries which display great stability in the number of players and in the pattern of entry and exit, the analysis of relational dynamics provides additional and more detailed information about industry structure and dynamics, and in particular about the dynamics of market shares. In a sense, network measures allow identi fi cation of the turbulence which takes place in deep waters, under a possibly quiet surface of a stable number of competitors. Therefore, the combination of network measures with industrial dynamics measures we are proposing can be thought as a structural approach, which might be an attractive alternative to over-strategizing, fragile, game-based representa- tions.