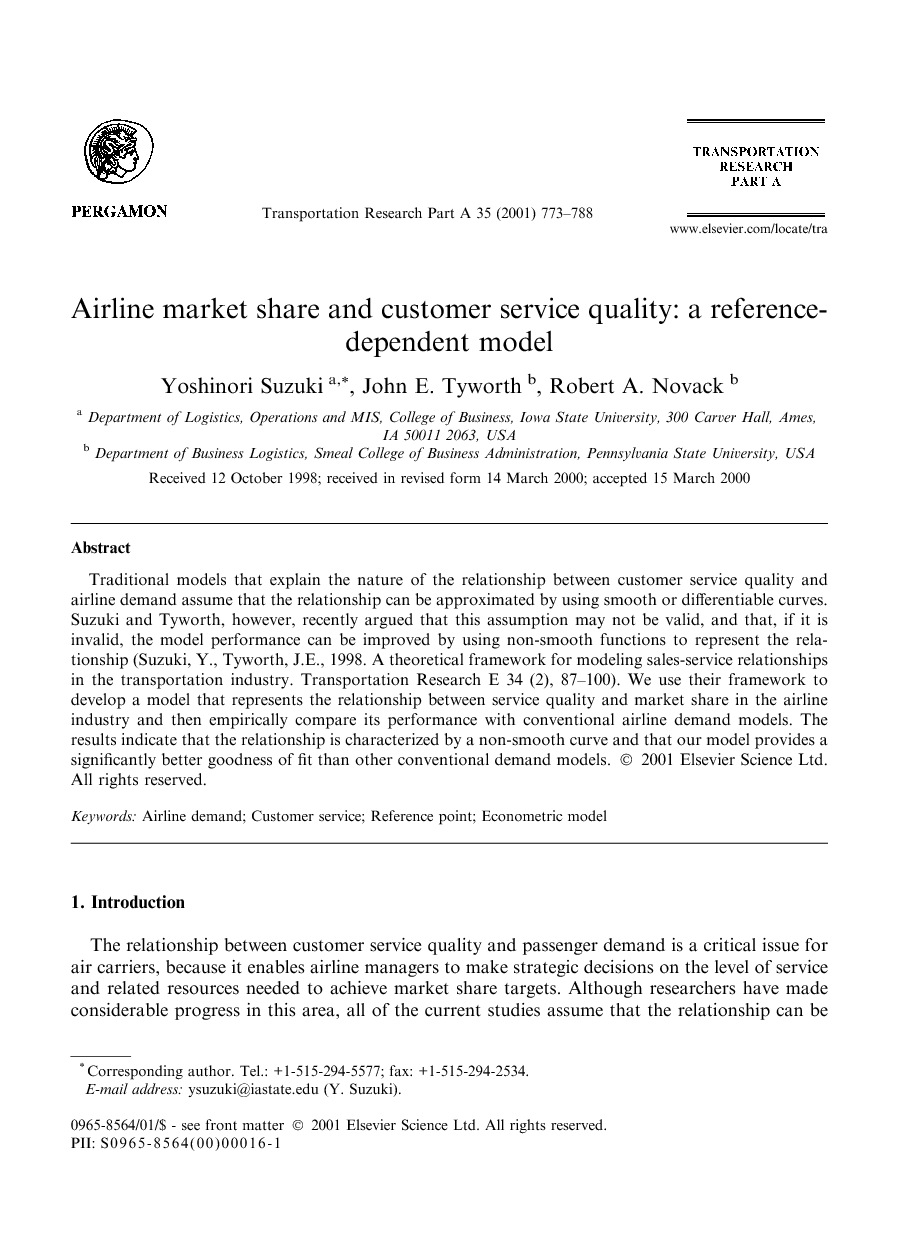 Traditional models that explain the nature of the relationship between customer service quality and airline demand assume that the relationship can be approximated by using smooth or differentiable curves. Suzuki and Tyworth, however, recently argued that this assumption may not be valid, and that, if it is invalid, the model performance can be improved by using non-smooth functions to represent the relationship (Suzuki, Y., Tyworth, J.E., 1998. A theoretical framework for modeling sales-service relationships in the transportation industry. Transportation Research E 34 (2), 87–100). We use their framework to develop a model that represents the relationship between service quality and market share in the airline industry and then empirically compare its performance with conventional airline demand models. The results indicate that the relationship is characterized by a non-smooth curve and that our model provides a significantly better goodness of fit than other conventional demand models.

The relationship between customer service quality and passenger demand is a critical issue for air carriers, because it enables airline managers to make strategic decisions on the level of service and related resources needed to achieve market share targets. Although researchers have made considerable progress in this area, all of the current studies assume that the relationship can be approximated by using smooth or differentiable curves such as linear, Cobb–Douglas, and binary logit functions (see, for example, Mutti and Murai, 1977, Borenstein, 1991, Dresner and Windle, 1992, Nako, 1992, Proussaloglou and Koppelman, 1995, Yoo and Ashford, 1996 and Suzuki, 1998).1 In other words, the current studies all assume that there is no “sudden change” of slopes for the functions representing the relationship between service quality and passenger demand. A recent theoretical work by Suzuki and Tyworth (1998), however, showed that this assumption may not be valid and, if that is the case, the model performance can be improved by using non-smooth functions to represent the relationship. The Suzuki and Tyworth (1998) framework is based on the recently developed theory of human choice behavior called the loss aversion (Tversky and Kahneman, 1991). Simply stated, the loss aversion property suggests that consumers evaluate product or service attributes relative to a certain reference point (e.g., expectation), and react more strongly to losses (negative deviations from the reference point) than to the equivalent-sized gains (positive deviations). Thus, the loss aversion property implies that the utility function should be steeper for losses than for gains (see Fig. 1). Suzuki and Tyworth applied this concept to the aggregate model of transportation demand and argued that if each customer is loss averse with respect to service quality, the aggregate relationship between service quality and transportation demand must also be asymmetric about the reference point. They suggest that one should first approximate the transportation customers' “aggregate” reference point (market reference point), like the average customer service level, and then compute the slope of the demand function separately for service gains and service losses. This procedure creates a non-smooth (non-differentiable) demand function that has a sudden change of slope at the reference point, meaning that the resulting function draws a curve that is asymmetric about the reference point.Although the Suzuki and Tyworth framework has much intuitive appeal, it was developed purely from the theoretical perspective and lacks empirical support. Their approach, moreover, estimates the S-shaped demand function in three steps, each of which requires sophisticated use of regression methods or integral calculus, and probably needs to be simplified for convenient application in the field. In this paper, we extend the work by Suzuki and Tyworth (1998) to: (1) develop an aggregate market share model that incorporates the asymmetric market response patterns to customer service quality, but is estimated in a relatively simple “one step” procedure, and (2) empirically test the simplified model's performance against the performances of conventional demand models. We start by specifying a generic model that can be applied equally well to all modes of transportation. We then apply the model to the airline industry and calibrate the model with data developed by the US Department of Transportation (US DOT). We next discuss the model estimation results and their implications. We close by discussing study limitations and directions for future research.

We believe that the Suzuki and Tyworth framework, with slight modifications, is suitable for modeling the relationship between service quality and market share in the air transportation industry. Our study results show that the Suzuki and Tyworth framework outperforms the more conventional models in terms of model fit, prediction accuracy, and the soundness of the estimated coefficients. Their framework is highly flexible, allowing the demand function to be either symmetric (loss neutral) or asymmetric (loss averse). Further, the framework, if calibrated with actual data, provides important managerial implications on market loss aversion tendencies. For example, our study results indicate that if an airline’s service quality falls below the market reference point (median service quality of the industry at time t), the airline’s market share will decrease significantly, but the service increase from the reference point may not increase an airline’s share. This type of information cannot be obtained from the conventional models. Given its superior performance, flexibility, and ability to provide managerial implications, the framework developed by Suzuki and Tyworth may become a useful tool for both the airline management and researchers. The study has its limitations. First, we assumed that the service quality of an airline can be measured by the linear combination (weighted average) of the airline's on-time performance, over-sales, mishandled baggage, and in-flight food quality variables. Our study results rest on the validity of this assumption. If the mix of variables used to compute service quality is changed (e.g., new variables), or if the method of computing service quality is changed (e.g., a multiplicative specification for Eq. (5)), our study results may no longer hold. Future research may want to explore this issue by re-estimating our model with alternative service quality measures and examining the robustness of our estimation results. Second, we assumed that market shares of major carriers are not affected by market entries and exits, or by market share fluctuations of non-major carriers (constant ratio assumption). Though this assumption is used widely in empirical studies, the validity of the assumption may have to be tested empirically in the future. Third, we used the aggregate US domestic data to calibrate the models, primarily because of data unavailability (many customer service variables are not available by route). Thus, our empirical results may be interpreted as capturing the “average” (across routes) sensitivity of market response to service quality and price changes. An interesting extension of our study, therefore, is to apply our model to the city-pair route data (provided that the data is available) and examine how loss aversion tendencies vary from route to route.