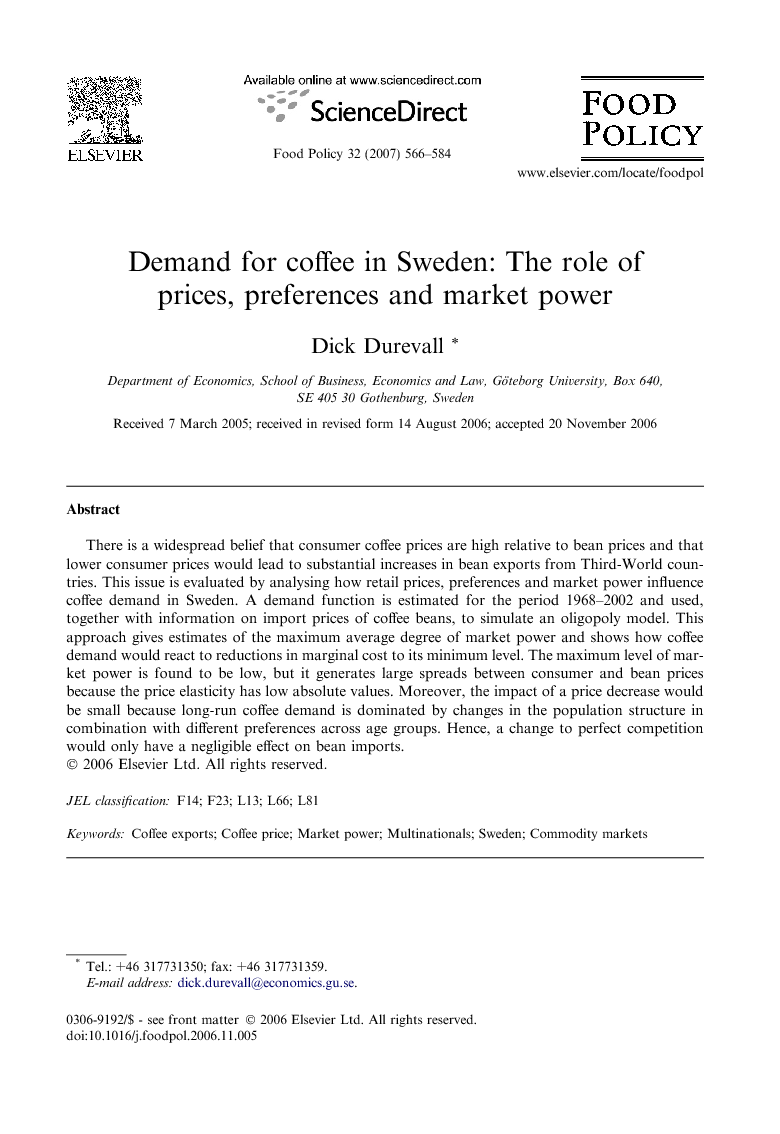 There is a widespread belief that consumer coffee prices are high relative to bean prices and that lower consumer prices would lead to substantial increases in bean exports from Third-World countries. This issue is evaluated by analysing how retail prices, preferences and market power influence coffee demand in Sweden. A demand function is estimated for the period 1968–2002 and used, together with information on import prices of coffee beans, to simulate an oligopoly model. This approach gives estimates of the maximum average degree of market power and shows how coffee demand would react to reductions in marginal cost to its minimum level. The maximum level of market power is found to be low, but it generates large spreads between consumer and bean prices because the price elasticity has low absolute values. Moreover, the impact of a price decrease would be small because long-run coffee demand is dominated by changes in the population structure in combination with different preferences across age groups. Hence, a change to perfect competition would only have a negligible effect on bean imports.

The objective of this paper was to evaluate the role of market power and prices in determining the demand for roasted coffee in Sweden. This is of interest because it can shed light on the functioning of consumer coffee markets and the determinants of the demand for coffee beans supplied by Third-World countries. Demand for roasted coffee was estimated using market data from Sweden for the period 1968–2002. In the long run, demand is mainly determined by population dynamics in combination with differences in preferences across generations; those born before the 1960s consume more coffee than younger generations. This result is in accordance with industry wisdom. Consumer prices also influence demand, but they only explain deviations from the long-run trend. Moreover, price elasticity is low, on average 0.19 in absolute terms. As a result, even large price reductions generate small increases in demand for roasted coffee and, consequently, for imports of coffee beans. To illustrate the response of coffee consumption to a consumer price decline, the impact of a price reduction to the level of the import price of green beans, including import and value added tax, was calculated for the period 1990–2002. Bean imports would have been about 8% higher, even though the price declined by over 50%. This finding differs from those of Morisset (1997), which indicate a substantial increase in export earnings, albeit in a very different model. The reason is probably that Morisset’s model does not include the dynamics of coffee demand adequately. The maximum elasticity adjusted Lerner index was found to only be about 0.10 for the period 1985–2002, where zero is perfect competition and one is monopoly or a perfect cartel. This points to the presence of some market power, but it is small and well below what is predicted by Cournot competition. The analysis does not show where this market power comes from, since market data is used and coffee is treated as a homogenous good. However, roasters are likely to have some market power because of branding and advertising and some roasters might be able to exercise regional market power. Moreover, it is possible that retailers also have some market power, although margins for coffee are considered to be low in general. Detailed micro data are needed in order to analyse these issues. Unfortunately, they are not available. Although there is a low degree of market power, a substantial spread between consumer and bean prices is generated when it interacts with the low price elasticity. This is evident when comparing periods before and after 1985. The measure of market power increased from approximately 0.05 to 0.1. Although this was a small increase in absolute terms, it nevertheless led to a substantial rise in the spread between consumer and import prices (roughly from 25% to 50%). We cannot say whether this change was due to increases in other costs without controlling for all components of marginal cost. Nonetheless, it was in line with Talbot (1997) and others who claim that there was an increase in market power following the breakdown of the International Coffee Agreement. The results of this study were obtained from one national coffee market, and they might not be relevant for other markets. Nevertheless, most industrialised countries have a market structure similar to the Swedish one: some of the largest multinationals are present in almost all consumer markets and the concentration of the four largest firms is usually very high (see Clarke et al., 2002; Sutton, 1991). Moreover, price elasticity is generally low, and, at least in North European markets, per-capita consumption is stagnant or declining (Durevall, 2003). Finally, it is possible that large roasters and traders have market power as buyers in the market for green coffee, as argued by Oxfam (2002) and Ponte (2002). We have not analyzed this issue. However, if they influence bean prices, increased competition is likely to have a beneficial effect on export revenue of coffee producing countries, particularly since consumer price elasticity is low.