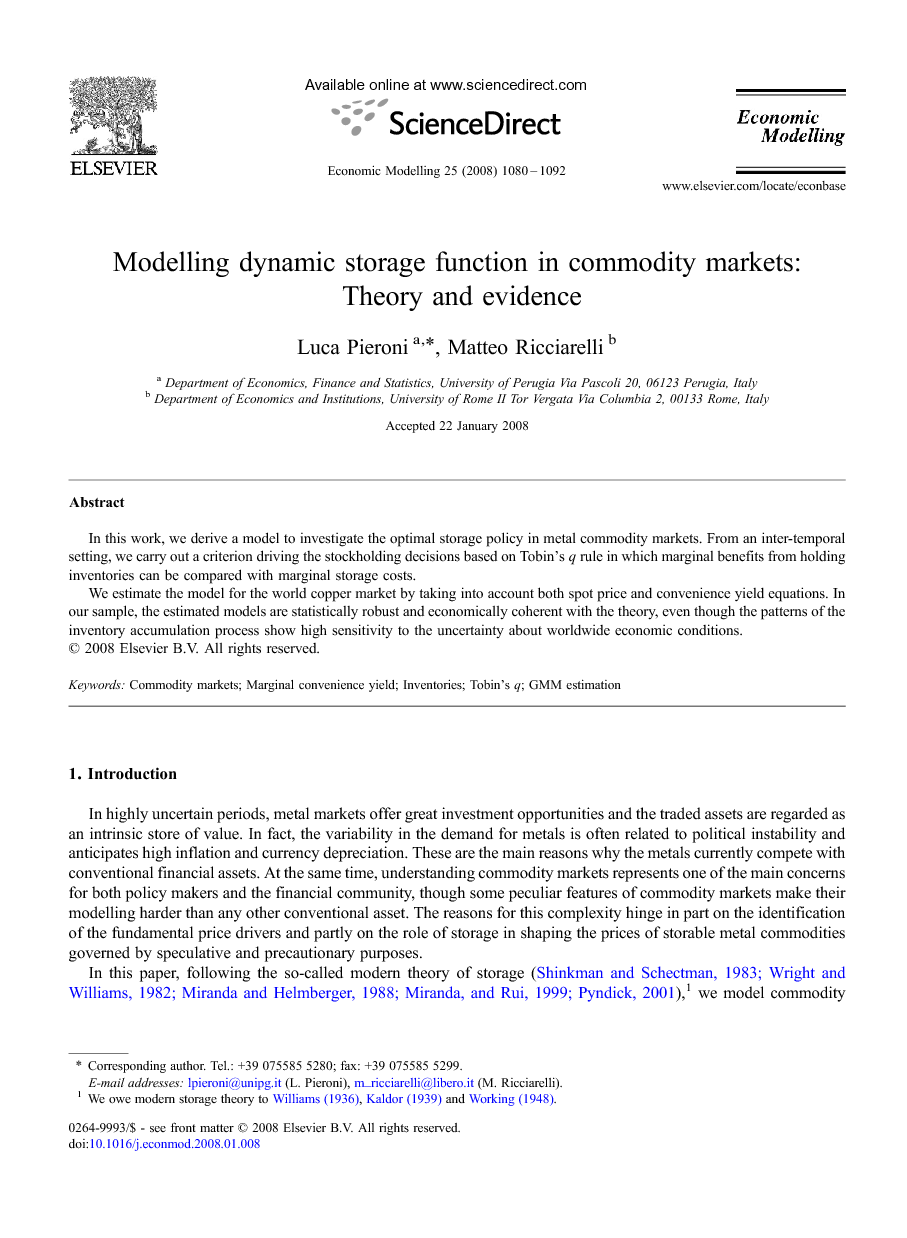 In this work, we derive a model to investigate the optimal storage policy in metal commodity markets. From an inter-temporal setting, we carry out a criterion driving the stockholding decisions based on Tobin's q rule in which marginal benefits from holding inventories can be compared with marginal storage costs. We estimate the model for the world copper market by taking into account both spot price and convenience yield equations. In our sample, the estimated models are statistically robust and economically coherent with the theory, even though the patterns of the inventory accumulation process show high sensitivity to the uncertainty about worldwide economic conditions.

In highly uncertain periods, metal markets offer great investment opportunities and the traded assets are regarded as an intrinsic store of value. In fact, the variability in the demand for metals is often related to political instability and anticipates high inflation and currency depreciation. These are the main reasons why the metals currently compete with conventional financial assets. At the same time, understanding commodity markets represents one of the main concerns for both policy makers and the financial community, though some peculiar features of commodity markets make their modelling harder than any other conventional asset. The reasons for this complexity hinge in part on the identification of the fundamental price drivers and partly on the role of storage in shaping the prices of storable metal commodities governed by speculative and precautionary purposes. In this paper, following the so-called modern theory of storage (Shinkman and Schectman, 1983, Wright and Williams, 1982, Miranda and Helmberger, 1988, Miranda and Rui, 1999 and Pindyck, 2001),1 we model commodity prices in an inter-temporal framework in which a rational agent can carry the good as inventory from current to future periods for both precautionary and speculation purposes. Thus, we can nest the studies based on speculative storage, mainly focused on the determination of the commodity equilibrium price (Wright and Williams, 1991, Deaton and Laroque, 1992, Deaton and Laroque, 1996 and Chambers and Bailey, 1996). Moreover, with respect to the contingent claim models by Black (1976) and Brennan and Schwartz (1985),2 we include some extensions by using the storage theory and the notion of convenience yield to avoid the misspecification of some crucial properties of commodity prices such as the dependency of price on inventory levels (Pirrong, 1998, Clewlow and Strickland, 2000, Casassus and Collin-Dufresne, 2005 and Nielsen and Schwartz, 2004). In this paper, we generalize Pindyck's (2001) discrete time model and develop a continuous time model for the production and the stockholding choices in the commodity markets. In this setting, the mean reverting feature of commodity spot price is endogenously determined and a closed form solution for the equations of spot price and convenience yield is carried out. Such a modelling strategy allows the novelties in this paper to be emphasized. Analogous with the investment theory (Tobin, 1969 and Hayashi, 1982), the optimal storage policy can be obtained from the definition of Tobin's q in which the marginal benefits from holding inventories are compared with the marginal costs. The stockholding rule leads to the computation of the pattern of the stocks in which Tobin's q represents the driver of the motion law for stockholding activities. Thus, by including an explicit equation for the marginal convenience yield within a competitive storage model, we can evaluate the changes in inventories by the q values. This paper empirically tests this model for the world copper market. The results exhibit a prominent role of inventory holdings which affect the pattern of the copper spot price. The estimates of the model are consistent with the theoretical predictions and, at the same time, do not seem to be qualitatively affected by the estimation methods we use in the empirical part of this paper. The remainder of this work proceeds as follows. In Section 2 we deal with the theoretical model and we derive a closed form solution to be tested. In Section 3, the estimation techniques are discussed, while we point out the econometric results in Section 4. Section 5 concludes the paper with some remarks.