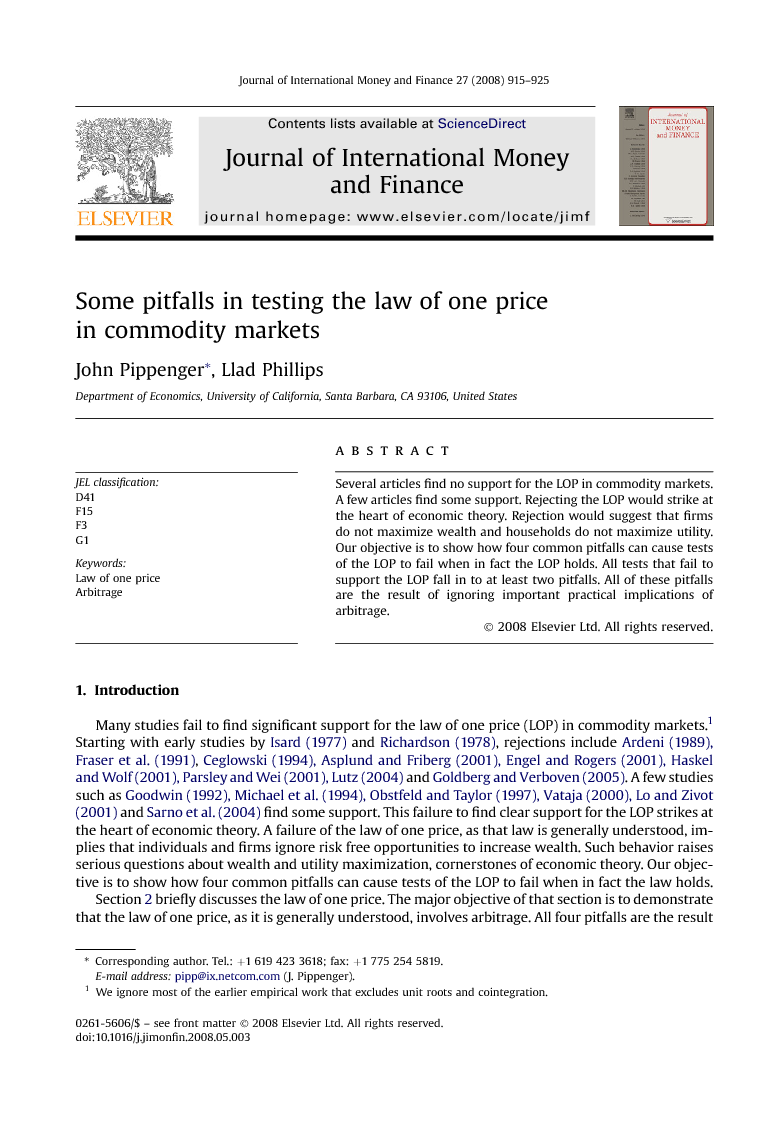 Several articles find no support for the LOP in commodity markets. A few articles find some support. Rejecting the LOP would strike at the heart of economic theory. Rejection would suggest that firms do not maximize wealth and households do not maximize utility. Our objective is to show how four common pitfalls can cause tests of the LOP to fail when in fact the LOP holds. All tests that fail to support the LOP fall in to at least two pitfalls. All of these pitfalls are the result of ignoring important practical implications of arbitrage.

Many studies fail to find significant support for the law of one price (LOP) in commodity markets.1 Starting with early studies by Isard (1977) and Richardson (1978), rejections include Ardeni, 1989 and Fraser et al., 1991, Ceglowski, 1994, Asplund and Friberg, 2001, Engel and Rogers, 2001, Haskel and Wolf, 2001, Parsley and Wei, 2001 and Lutz, 2004 and Goldberg and Verboven (2005). A few studies such as Goodwin, 1992, Michael et al., 1994, Obstfeld and Taylor, 1997, Vataja, 2000 and Lo and Zivot, 2001 and Sarno et al. (2004) find some support. This failure to find clear support for the LOP strikes at the heart of economic theory. A failure of the law of one price, as that law is generally understood, implies that individuals and firms ignore risk free opportunities to increase wealth. Such behavior raises serious questions about wealth and utility maximization, cornerstones of economic theory. Our objective is to show how four common pitfalls can cause tests of the LOP to fail when in fact the law holds. Section 2 briefly discusses the law of one price. The major objective of that section is to demonstrate that the law of one price, as it is generally understood, involves arbitrage. All four pitfalls are the result of ignoring practical implications of arbitrage. The pitfalls are: (1) using retail prices, (2) omitting transportation costs, (3) ignoring time and (4) not using identical products. The last three pitfalls are widely recognized as problems for testing the LOP. The first pitfall is not. Section 3 describes the data. Section 4 uses that data to show that the LOP worked in the wheat market between the United States and Japan. Section 5 describes and illustrates the pitfalls into which almost all tests of the LOP, particularly those that have failed to find support, have fallen. The final section summarizes the article and presents our conclusion. We conclude that, as a result of the prevalence of these pitfalls in the literature, we know of no evidence that would lead us to reject the law of one price in commodity markets.

There is some confusion in the literature about what the law of one price means. A few articles interpret the LOP as simply a tendency for prices for similar commodities in two different locations to tend toward equality in the long run. However, most of the literature either implicitly or explicitly assumes that arbitrage is the mechanism that produces the LOP. Definitions of the LOP in dictionaries and encyclopedias for economics do the same.We follow that standard interpretation. Other market forces may tend to equate prices in different locations, but arbitrage is the mechanism behind the law of one price. Although there is some evidence supporting the LOP, there is a large body of evidence that fails to support the lawof one price. Rejecting the lawof one price as it is generally understood would strike at the heart of economic theory. Rejecting the LOP would suggest that firms do not maximize wealth and households do not maximize utility. Our primary objective is to point out four pitfalls that plague this literature. The first pitfall we consider is the use of retail prices. Several of the more recent rejections of the LOP have used retail prices. If one accepts the standard interpretation of the LOP adopted here, then one cannot use retail prices to test the LOP. Arbitrage is normally impossible at the retail level because resale is normally impossible. The second pitfall is omitting transportation costs. With only a fewexceptions, most tests of the LOP fail to account for the effects of transportation costs. A comparison of Table 3, which avoids all the pitfalls, and Table 4 illustrates how excluding freight rates can weaken cointegration tests of the LOP. The third pitfall is ignoring the fact that commodity arbitrage takes time. As we point out here, we believe for the first time, a direct test of the LOP requires at least some forward prices. When selling prices are spot prices, the transaction involves risk because shipping commodities takes time. Since there is risk, arbitrage is impossible. All tests of the LOP have used spot prices because forward prices have not been available. Such tests actually test two propositions: (1) the LOP holds for forward prices and (2) other market mechanisms tend to equate forward and spot prices. Not only does the literature fail to recognize this problem with spot prices, most articles do not even make an effort to adjust spot prices for the fact that commodity arbitrage takes time. A comparison of Tables 3 and 5 illustrates how ignoring time with spot prices can weaken cointegration tests of the LOP. The fourth pitfall is the failure to use identical products. Only a few tests of the LOP use identical products. Most use categories of products such as ‘wool’ or ‘tyres’ or price indexes for such categories. A comparison of Tables 3 and 6 illustrates how using similar, but not identical, products can weaken cointegration tests of the LOP. Table 7 combines all of the last three pitfalls. Unlike Table 3, which shows strong support for the LOP, Table 7 shows no support. Ignoring transportation costs, not accounting for the fact that commodity arbitrage takes time and not using identical products have been recognized as problems for some time. Unfortunately the combined effect of these three pitfalls on tests of the LOP has not been fully appreciated. As a result of the prevalence of these pitfalls in the literature, we knowof no empirical evidence that would lead us to reject the law of one price in commodity markets