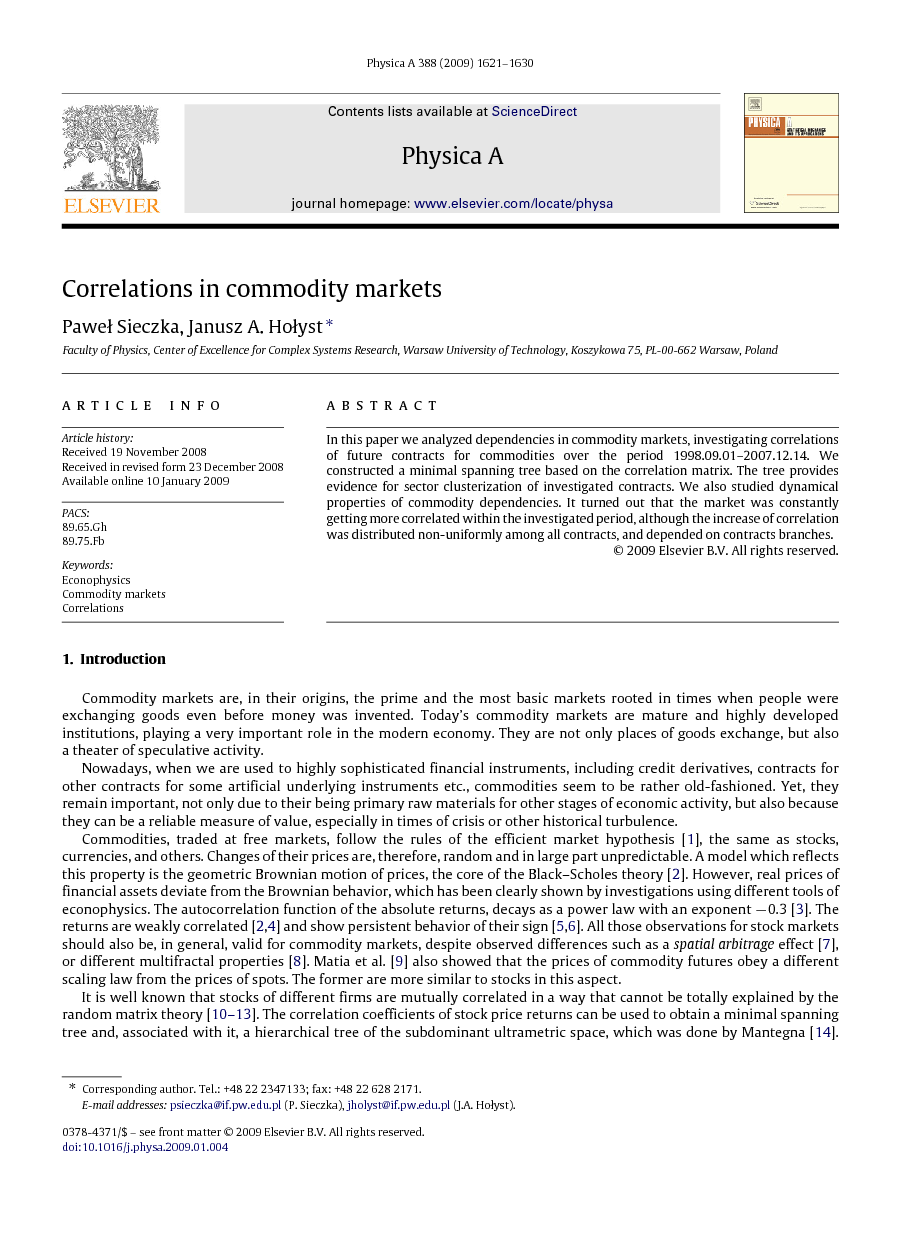 In this paper we analyzed dependencies in commodity markets, investigating correlations of future contracts for commodities over the period 1998.09.01–2007.12.14. We constructed a minimal spanning tree based on the correlation matrix. The tree provides evidence for sector clusterization of investigated contracts. We also studied dynamical properties of commodity dependencies. It turned out that the market was constantly getting more correlated within the investigated period, although the increase of correlation was distributed non-uniformly among all contracts, and depended on contracts branches.

Commodity markets are, in their origins, the prime and the most basic markets rooted in times when people were exchanging goods even before money was invented. Today’s commodity markets are mature and highly developed institutions, playing a very important role in the modern economy. They are not only places of goods exchange, but also a theater of speculative activity. Nowadays, when we are used to highly sophisticated financial instruments, including credit derivatives, contracts for other contracts for some artificial underlying instruments etc., commodities seem to be rather old-fashioned. Yet, they remain important, not only due to their being primary raw materials for other stages of economic activity, but also because they can be a reliable measure of value, especially in times of crisis or other historical turbulence. Commodities, traded at free markets, follow the rules of the efficient market hypothesis [1], the same as stocks, currencies, and others. Changes of their prices are, therefore, random and in large part unpredictable. A model which reflects this property is the geometric Brownian motion of prices, the core of the Black–Scholes theory [2]. However, real prices of financial assets deviate from the Brownian behavior, which has been clearly shown by investigations using different tools of econophysics. The autocorrelation function of the absolute returns, decays as a power law with an exponent −0.3 [3]. The returns are weakly correlated [2] and [4] and show persistent behavior of their sign [5] and [6]. All those observations for stock markets should also be, in general, valid for commodity markets, despite observed differences such as a spatial arbitrage effect [7], or different multifractal properties [8]. Matia et al. [9] also showed that the prices of commodity futures obey a different scaling law from the prices of spots. The former are more similar to stocks in this aspect. It is well known that stocks of different firms are mutually correlated in a way that cannot be totally explained by the random matrix theory [10], [11], [12] and [13]. The correlation coefficients of stock price returns can be used to obtain a minimal spanning tree and, associated with it, a hierarchical tree of the subdominant ultrametric space, which was done by Mantegna [14]. He detected grouping of firms of a similar profile in the minimal spanning tree. This effect can be reproduced neither by the random model of uncorrelated time series, nor by the one-factor model [15]. In this paper, we analyzed cross-correlations in commodity markets. We created the correlation matrix and corresponding correlation-based metric. Using the correlation metric we created a minimal spanning tree of investigated contracts, looking for sector clusterization. We also examined dynamic properties of correlations, finding out that commodity contracts were getting more and more correlated, and mean distances in a corresponding minimal spanning tree were smaller and smaller in the course of time. However, individual contracts contributed to the increase of mean correlation differently. Their idiosyncratic contribution to the correlations was characterized by an introduced quantity (strength) and its evolution. The motivation for our research was a growing interest of investors and mass media in commodity markets. Skyrocketing oil prices were expected to reach the level of 200 USD per barrel during one week, and went down under 100 USD during another. We wanted to investigate the behavior of the commodity markets with the tools of complex system physics. We found the mirroring of the specific situation of the last years, in a time dependent picture of commodity prices correlations.

We analyzed the correlation matrix of commodity prices. Due to long time series, the level of noise in correlation matrix was low. Two eigenvectors of Cij, corresponding to the largest eigenvalues were plotted. The picture Fig. 2 visualizes a clustering structure of correlations. Using a correlation metric dij we created MST of investigated contracts. MST provides clear evidence for the existence of strong correlations of commodities within a given sector and for inter-sector correlations, depending on the level of similarity. The above picture of correlations could be expected from similar studies of stock markets and currencies. More interesting are investigated dynamical properties of correlations which, as we observed, changed in time. In the studied period (i.e. 1998.09.012007.12.14) the mean correlation (6) increased from about 0:08 to about 0:13. The reason for this correlation increase can be as follows. Commodity markets attracted a lot of investors' attention in the last years. A growing demand for energy, metals, and food from fast developing Chinese and Indian economy created a boom for commodities and an impulse for intensive speculations. This market boom makes prices follow one direction, which resulted in an increase of correlation between the traded assets. A similar effect was observed during market crashes [19]. The effect of the boom for commodities is responsible for the observed growth of mean correlation coefficient. The mean correlation calculated as an average measure increased, but the contributions of individual contracts to this difference were various. We introduced strength of a contract expressing the magnitude of its correlation with other contracts. Strengths calculation for moving time window visualized the evolution of this parameter. It turned out that metals and fuels participated significantly in the increase of strength, while animals almost remained unchanged. It is obvious that prices of financial assets are driven by several economic factors. Among them there is the most significant factor, which we call the first factor. A measure of importance of the factor can be a corresponding eigenvalue. We showed that the role of the first factor was getting stronger, so the market finally became more and more one-factored. This fact, that can be observed in the increase of the first eigenvalue, is also responsible for the increase of correlations, characterized by the mean correlation parameter. That effect was caused by a growing price bubble. We also observed the change of the first factor itself, or from the other viewpoint, the change of its influence on specific commodities. The first eigenvector components evolved in time, in a way that depends on the commodity branch. Contracts which became significantly more dependent on the first factor, that is metals and fuels, also became stronger. Contracts with weak interactions with the first factor, like animals, did not change their relatively low strengths. We studied correlations of commodity contracts returns. Our analysis showed that, starting from the year 2003, the commodity market became more correlated, and was driven by a single economic factor. The dependence on the factor became stronger with time. The result is most pronounced in an evolution of the largest eigenvalue, normalized by the sum of all eigenvalues, and it can also be seen in the evolution of contracts strengths and their mean correlation. The most important result seems to be the clear evidence of the constantly increasing market synchronization. This fact can even be related to the global scale of current economic crisis. However, the authors cannot suggest that they found the roots of recent dramatic market changes. It was expected that dynamics of commodities belonging to the same sector would be clustered, i.e. would be closely placed in the MST. One could not, however, predict in advance which of the commodities would become synchronized with the first eigenvalue (a market mode). It is surprising that the agriculture products behaved differently compared to metals that became much more synchronized. An obvious implication from our study is the increasing risk for market players that cannot effectively diversify their portfolios, since corresponding assets are more and more correlated. It is well known that such correlations modify substantially the optimal portfolios and make diversification more difficult, since the effective number of assets became smaller [2].