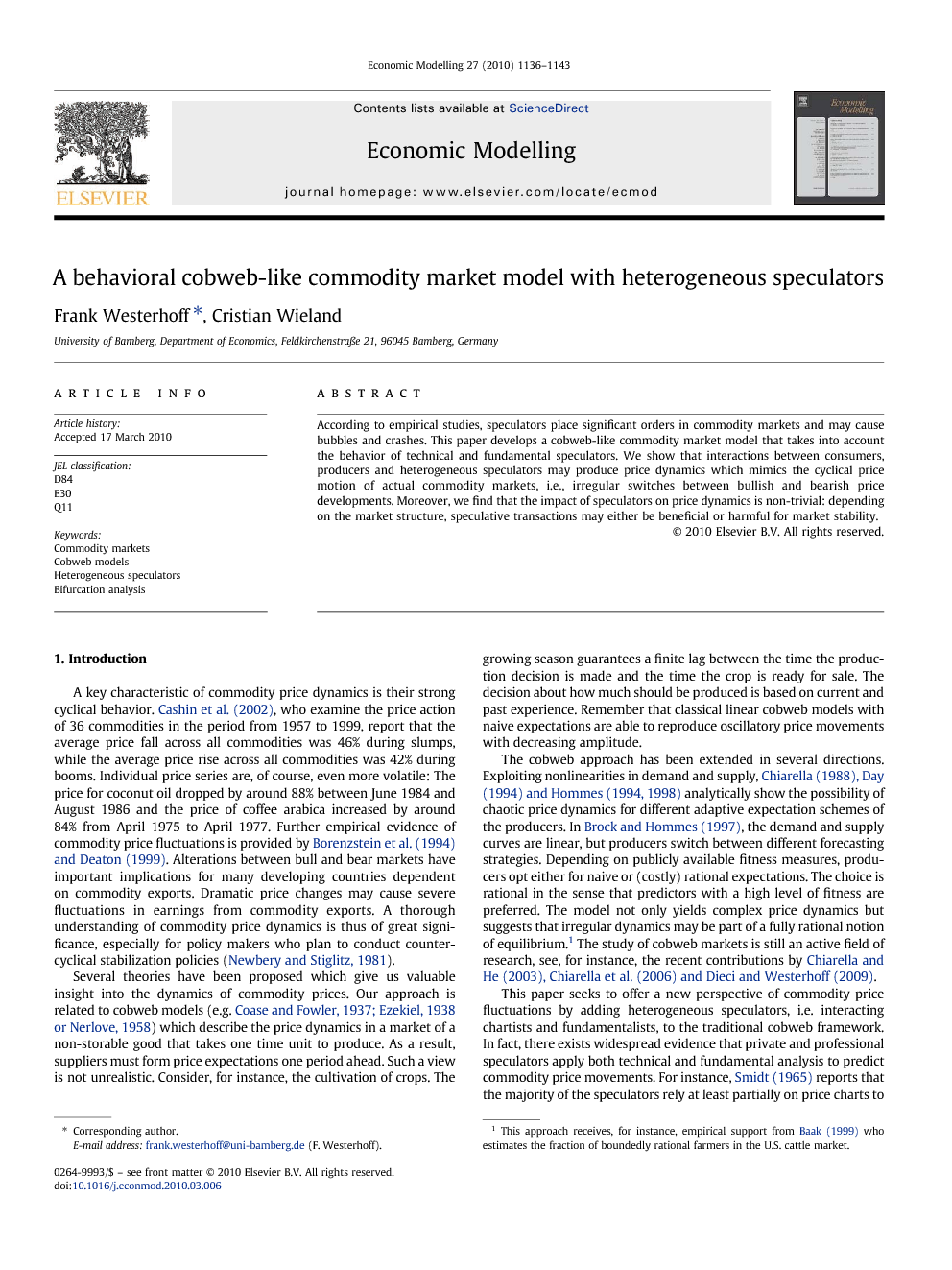 According to empirical studies, speculators place significant orders in commodity markets and may cause bubbles and crashes. This paper develops a cobweb-like commodity market model that takes into account the behavior of technical and fundamental speculators. We show that interactions between consumers, producers and heterogeneous speculators may produce price dynamics which mimics the cyclical price motion of actual commodity markets, i.e., irregular switches between bullish and bearish price developments. Moreover, we find that the impact of speculators on price dynamics is non-trivial: depending on the market structure, speculative transactions may either be beneficial or harmful for market stability.

A key characteristic of commodity price dynamics is their strong cyclical behavior. Cashin et al. (2002), who examine the price action of 36 commodities in the period from 1957 to 1999, report that the average price fall across all commodities was 46% during slumps, while the average price rise across all commodities was 42% during booms. Individual price series are, of course, even more volatile: The price for coconut oil dropped by around 88% between June 1984 and August 1986 and the price of coffee arabica increased by around 84% from April 1975 to April 1977. Further empirical evidence of commodity price fluctuations is provided by Borenzstein et al., 1994 and Deaton, 1999. Alterations between bull and bear markets have important implications for many developing countries dependent on commodity exports. Dramatic price changes may cause severe fluctuations in earnings from commodity exports. A thorough understanding of commodity price dynamics is thus of great significance, especially for policy makers who plan to conduct counter-cyclical stabilization policies (Newbery and Stiglitz, 1981). Several theories have been proposed which give us valuable insight into the dynamics of commodity prices. Our approach is related to cobweb models (e.g. Coase and Fowler, 1937, Ezekiel, 1938 and Nerlove, 1958) which describe the price dynamics in a market of a non-storable good that takes one time unit to produce. As a result, suppliers must form price expectations one period ahead. Such a view is not unrealistic. Consider, for instance, the cultivation of crops. The growing season guarantees a finite lag between the time the production decision is made and the time the crop is ready for sale. The decision about how much should be produced is based on current and past experience. Remember that classical linear cobweb models with naive expectations are able to reproduce oscillatory price movements with decreasing amplitude. The cobweb approach has been extended in several directions. Exploiting nonlinearities in demand and supply, Chiarella, 1988, Day, 1994, Hommes, 1994 and Hommes, 1998 analytically show the possibility of chaotic price dynamics for different adaptive expectation schemes of the producers. In Brock and Hommes (1997), the demand and supply curves are linear, but producers switch between different forecasting strategies. Depending on publicly available fitness measures, producers opt either for naive or (costly) rational expectations. The choice is rational in the sense that predictors with a high level of fitness are preferred. The model not only yields complex price dynamics but suggests that irregular dynamics may be part of a fully rational notion of equilibrium.1 The study of cobweb markets is still an active field of research, see, for instance, the recent contributions by Chiarella and He, 2003, Chiarella et al., 2006 and Dieci and Westerhoff, 2009. This paper seeks to offer a new perspective of commodity price fluctuations by adding heterogeneous speculators, i.e. interacting chartists and fundamentalists, to the traditional cobweb framework. In fact, there exists widespread evidence that private and professional speculators apply both technical and fundamental analysis to predict commodity price movements. For instance, Smidt (1965) reports that the majority of the speculators rely at least partially on price charts to render trading decisions in commodity markets. Similar results are reported in questionnaire studies of Draper, 1985 and Canoles et al., 1998. In addition, Sanders et al. (2000) find strong evidence of positive feedback trading in several commodity markets and Weiner (2002) detects herding behavior in the petroleum market. Overall, these studies indicate that chart and fundamental speculation is a major factor for price variation in commodity markets. In line with the early cobweb literature, we construct a behavioral cobweb-like model with a supply response lag. The demand and supply schedules of the consumers and producers are linear and the producers have naive expectations. The market is cleared by the price sensitive demand of the consumers. But the supply available to consumers also depends on the trading decisions of the speculators, i.e. their excess selling (buying) increases (decreases) the supply.2 The speculators apply both technical and fundamental methods to predict prices. While technical analysis extrapolates past price trends into the future, fundamental analysis assumes that prices converge towards their fundamental values. The speculators are boundedly rational in the sense that they tend to use forecast rules with a high level of fitness. Note that the speculators' switching between technical and fundamental rules introduces a non-linearity into the model. We are interested in how speculators may influence the evolution of commodity prices.3 Overall, our model is able to generate price dynamics which mimic the cyclical swings of commodity prices quite well. We derive the following results. Suppose that the cobweb market is stable without speculators. Then a pitchfork bifurcation, followed by a period doubling bifurcation, may emerge as the total number of speculators increases. Further simulation analysis reveals that after many period doubling bifurcations the dynamics becomes chaotic. For certain parameter values, we observe the emergence of bull and bear markets, as well as irregular price fluctuations between bull and bear markets. However, if the demand and supply schedules of the consumers and producers violate the stability condition, we show that the presence of a critical mass of speculators may stabilize the market. Instead of a price explosion, the price may settle down on a complicated attractor, a limit cycle or even a fixed point. This finding is quite remarkable: The common suggestion to crowd out speculators may not always be beneficial to market stability. In fact, complex interactions between technical and fundamental speculators may prevent unstable price trajectories. The remainder of this paper is organized as follows. Section 2 develops a behavioral cobweb-like commodity market model with heterogeneous boundedly rational speculators. In Section 3, we present our analytical results and in Section 4, we numerically illustrate the dynamics. The last section offers some conclusions and points out some extensions.

production and prices of particular commodities have been studied with great interest (for an early review see Ezekiel 1938). The cobweb framework has become the basic workhorse to explore this phenomenon. While the early theoretical contributions have been linear in design, a number of promising non-linear models have also been formulated (Chiarella 1988, Day 1994, Hommes 1994, Brock and Hommes 1997). Without question, all these papers help to explain the empirical evidence. But to our understanding one important aspect has been overlooked. As indicated in many empirical studies, speculators have a marked impact on the price formation process (Smidt, 1965, Draper, 1985, Canoles et al., 1998, Sanders et al., 2000, Weiner, 2002). Our paper extends the basic linear cobweb model with naive expectations and a supply response lag by the incorporation of heterogeneous interacting speculators. Even in its simple form the model has the potential to generate cyclical, yet complex, price dynamics. The dynamics live from the fact that a sufficient fraction of the speculators applies destabilizing technical trading rules. However, as we have shown analytically, banning speculators from the market may only be a mixed blessing. Although the speculators might, on average, be regarded as destabilizing there also exist situations in which they stabilize the dynamics. The simplicity of our model has been achieved by ignoring some of the details of commodity markets. We would thus like to point out a number of extensions. First, in our model, producers and speculators operate on the same time scale. A more reasonable perspective would be that the producers update their production decision on, say, a weekly or monthly basis while speculators trade on a daily basis (or even more frequently). An interesting modification of this model would be to combine different time scales for speculators and producers. Second, actual commodity transactions are accomplished by the co-existence of spot and futures markets. Here, our attention is restricted to the spot market only. Brock et al. (2009) provide some first potential frameworks on how to combine the two markets. The analysis gets much more complicated, but also more realistic. Third, numerical evidence (not reported) reveals that the average long-term position of speculators, compared to an average speculative transaction, may be relatively low.9 However, it may be worthwhile to explore a scenario in which the speculators actively control their inventory position.10 This will most likely increase the dimension of the system and may open up the door for periodic or quasiperiodic motion via a Neimark–Sacker bifurcation. Fourth, in many agricultural markets we often see interventions by governments that try to influence prices. Cobweb models are suitable to prestudy the consequences of such actions. However, if one omits the impact of speculators, the strategies may be ill designed. Fifth, our model is deterministic. By adding dynamic noise one may try to calibrate the model even more closely to the stylized facts. For instance, one may investigate the consequences of demand and supply shocks. Finally, since the structure of the current model is quite simple it may be possible to test the model statistically using real data. For some results in this direction see Reitz and Westerhoff (2007).