عنوان انگلیسی
The impact of biofuel growth on agriculture : Why is the range of estimates so wide?
دانلود فوری مقاله + سفارش ترجمه 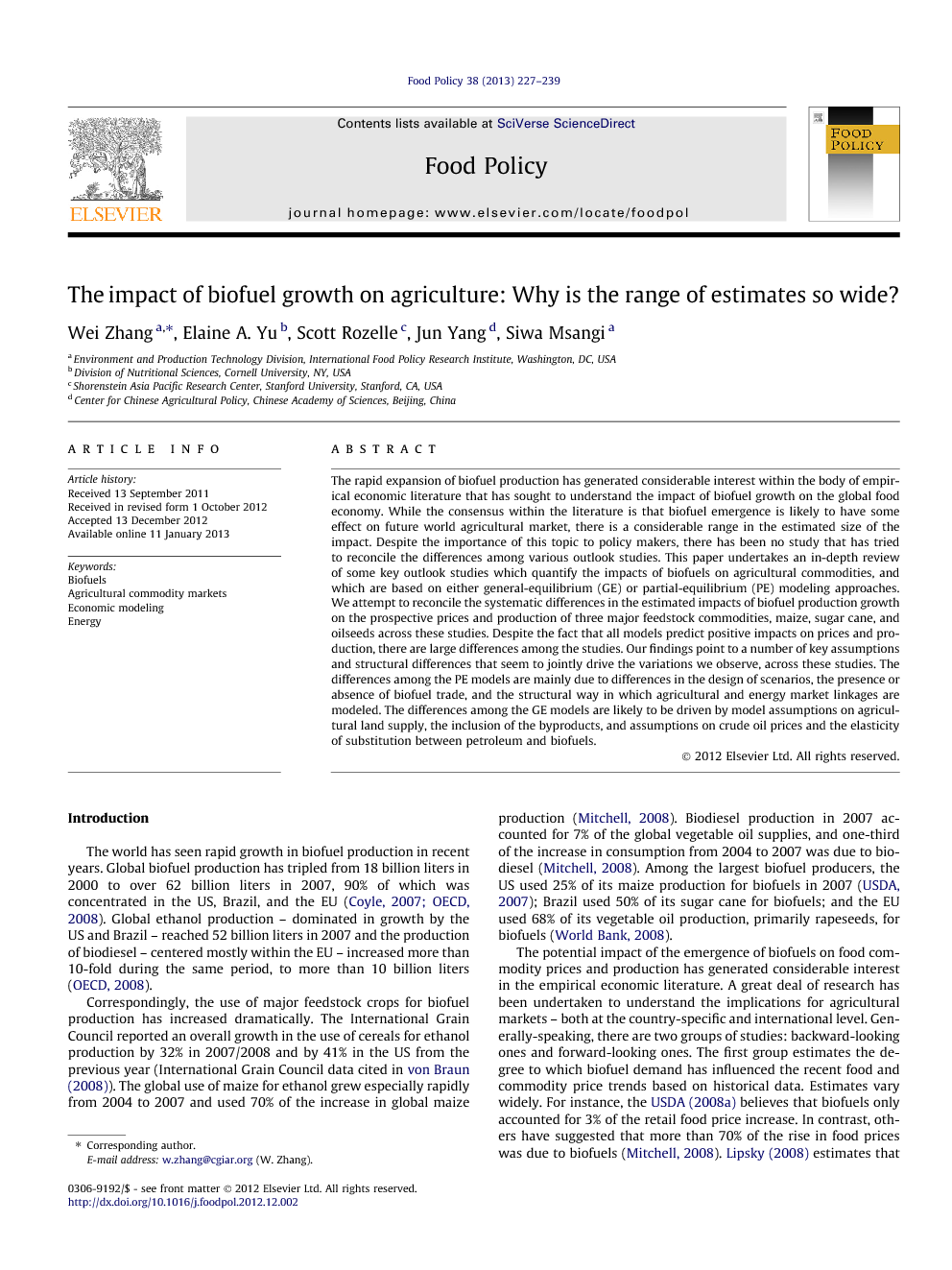 The rapid expansion of biofuel production has generated considerable interest within the body of empirical economic literature that has sought to understand the impact of biofuel growth on the global food economy. While the consensus within the literature is that biofuel emergence is likely to have some effect on future world agricultural market, there is a considerable range in the estimated size of the impact. Despite the importance of this topic to policy makers, there has been no study that has tried to reconcile the differences among various outlook studies. This paper undertakes an in-depth review of some key outlook studies which quantify the impacts of biofuels on agricultural commodities, and which are based on either general-equilibrium (GE) or partial-equilibrium (PE) modeling approaches. We attempt to reconcile the systematic differences in the estimated impacts of biofuel production growth on the prospective prices and production of three major feedstock commodities, maize, sugar cane, and oilseeds across these studies. Despite the fact that all models predict positive impacts on prices and production, there are large differences among the studies. Our findings point to a number of key assumptions and structural differences that seem to jointly drive the variations we observe, across these studies. The differences among the PE models are mainly due to differences in the design of scenarios, the presence or absence of biofuel trade, and the structural way in which agricultural and energy market linkages are modeled. The differences among the GE models are likely to be driven by model assumptions on agricultural land supply, the inclusion of the byproducts, and assumptions on crude oil prices and the elasticity of substitution between petroleum and biofuels.

Biofuels production and distribution are extremely complex processes involving markets for land, crops, livestock, energy and food (Golub and Hertel, 2011). The predicted impact of increased biofuels production depends on the model assumptions about the economic structure and parameters governing each of these processes (Golub and Hertel, 2011). This study undertakes an indepth review of some key outlook studies which quantify the impacts of biofuels on agriculture, and which are based on either general- equilibrium (GE) or partial-equilibrium (PE) modeling approaches. We attempt to reconcile the systematic differences in the estimated impacts of biofuel production growth on the prospective prices and production of three major feedstock commodities, maize, sugar cane, and oilseeds across these studies, with the range of assumptions and model characteristics that are embedded within them. Overall, all outlook studies reviewed indicate that biofuel growth will lead to higher prices and production levels for the three primary feedstock crops of 1st generation biofuels by 2015. In other words, all modeling efforts believe that—to a greater or lesser extent—biofuel development is likely to remain an important driving force in world agricultural markets over the medium term. Since most of these basic results are driven by comparing the baseline of ‘no-biofuels’ with an alternative scenario which allows the policy-driven emergence of biofuels, the impacts of ambitious policy objectives in major biofuels-producing countries are shown to be significant and uniformly consistent, as to the direction of the simulated effects. Despite the fact that all models predict positive impacts on prices and production, there are large differences among the studies. Our findings point to a number of key assumptions and structural differences in the modeling approach that seem to jointly drive the variation we observe, across these studies – some being related to particular assumptions or behavioral specifications built into individual models, and some being more systematic across broader classes of models, such as the partial (PE) or generalequilibrium (GE) models. First, the scenario design – and the underlying assumptions of biofuel policy, market penetration etc. – appears to be an important factor for the PE models and has likely contributed to relatively high price impact of biofuels in the WEMAC projections. Second, the presence or absence of biofuel trade, and the structural way in which agriculture and energy market linkages are modeled, are likely to account for some of the differences we see between models within the PE class, such as the OECD and IFPRI model projections for sugar and vegetable oil. Third, relaxing restrictions on total agricultural land supply may be the driving force for LEITAP’s relatively low estimate of price impacts, relative to the other GE-based projections. Fourth, accounting for the possible contribution of DDG by-products to animal feed is the distinguishing difference between the GTAPbased Purdue I and Purdue II models – and also extends to models within the PE family that account for those effects such as the FAPRI and OECD-FAO models and those that do not, such as the IMPACT model. Fifth, the high degree of substitutability between petroleum and biofuels (especially when combined with assumptions on future crude oil prices) is the distinguishing feature of the GF study and contributes towards its relatively high predictions on price and production impacts, relative to other GE models. The assumption—whether true or false—relates closely to what is envisioned in terms of future technology adoption within the transportation sector. Policy and economic factors will weigh in heavily on determining which types of the flexible-fuel vehicles will become widely available and also the types of fuel sold at filling stations. For example, if policies are slow to encourage the adoption of flexible-fuel vehicles or impose ‘blending walls’ such as those which exist in some regions of the US, then the degree to which biofuels are substitutable with gasoline and diesel may be limited.8 Furthermore, if biofuels are sold at or below their energy values with respect to gasoline and diesel, there will be enough consumer demand to encourage the building of E-85 or other alternative fuel pumps. Because these differences in assumptions make a significant difference, policy makers should take into account the underlying assumption-based and structural differences among models when using model-generated outcomes to evaluate economic and environmental impacts, and to guide decision-making. Based on our findings, we have identified a number of urgent knowledge gaps and uncertainties that need to be addressed by future research. First, there is a need to learn more about key model parameters such as the elasticity of substitution between oil-based fuels and biofuels because of their importance in driving GE model results. Knowledge on these parameters is extremely limited, so far, especially with regard to how they might evolve over time, given that their values are often set based on calibration to a relatively short series of historical data or by expert judgment. Second, better predictions of future crude oil prices are needed for both PE- and GE-based studies, ideally, in the same way that IPCC harmonizes the assumptions underlying quantitative assessments of future climate change impacts, and examines the model- based sensitivity and other key sources of uncertainty that are embodied in the wide range of scenario results. Third, the future expandability of agricultural land supply and the contribution that by-products of biofuel production can make to livestock feed balances are likely to be crucial factors that determine the price impacts of model-based projections, and should be carefully studied. Fourth, the on-going research that is being undertaken by various groups in projecting long-term biofuel impacts on agriculture can benefit greatly from more coordinated modeling efforts, so as to improve the sharing of knowledge and generate a better understanding of the key factors that may offset or aggravate aggravate the effects that biofuels can have on market dynamics, environmental quality and, ultimately, human welfare. The lesson for policymakers is that results from economic models depend heavily on assumptions, and because we are trying to predict long-run human behavior, legitimate differences can be present in those assumptions (Dumortier et al., 2011).