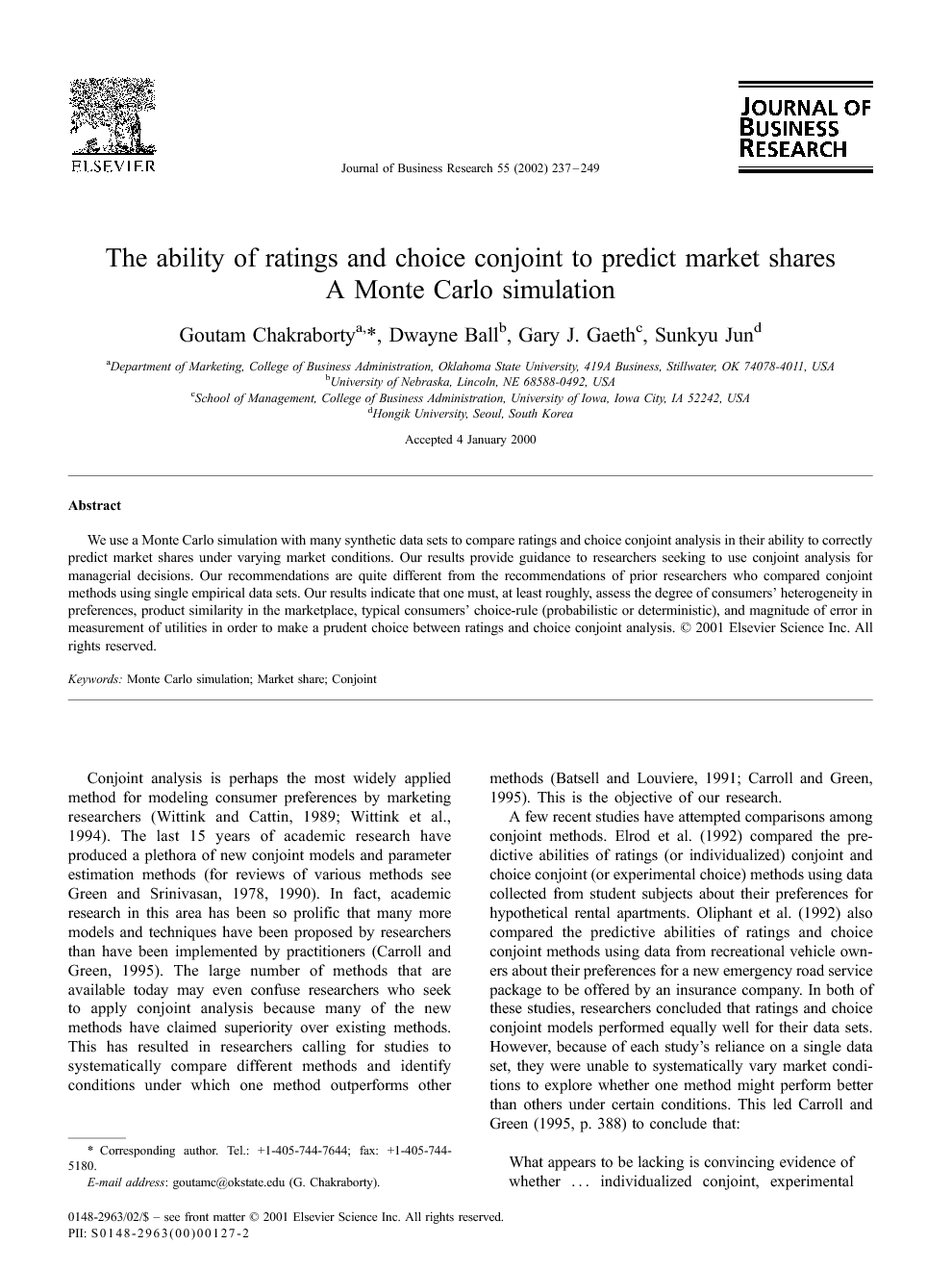 We use a Monte Carlo simulation with many synthetic data sets to compare ratings and choice conjoint analysis in their ability to correctly predict market shares under varying market conditions. Our results provide guidance to researchers seeking to use conjoint analysis for managerial decisions. Our recommendations are quite different from the recommendations of prior researchers who compared conjoint methods using single empirical data sets. Our results indicate that one must, at least roughly, assess the degree of consumers' heterogeneity in preferences, product similarity in the marketplace, typical consumers' choice-rule (probabilistic or deterministic), and magnitude of error in measurement of utilities in order to make a prudent choice between ratings and choice conjoint analysis.

Conjoint analysis is perhaps the most widely applied method for modeling consumer preferences by marketing researchers (Wittink and Cattin, 1989; Wittink et al., 1994). The last 15 years of academic research have produced a plethora of new conjoint models and parameter estimation methods (for reviews of various methods see Green and Srinivasan, 1978, 1990). In fact, academic research in this area has been so prolific that many more models and techniques have been proposed by researchers than have been implemented by practitioners (Carroll and Green, 1995). The large number of methods that are available today may even confuse researchers who seek to apply conjoint analysis because many of the new methods have claimed superiority over existing methods. This has resulted in researchers calling for studies to systematically compare different methods and identify conditions under which one method outperforms othermethods (Batsell and Louviere, 1991; Carroll and Green, 1995). This is the objective of our research. A few recent studies have attempted comparisons among conjoint methods. Elrod et al. (1992) compared the pre- dictive abilities of ratings (or individualized) conjoint and choice conjoint (or experimental choice) methods using data collected from student subjects about their preferences for hypothetical rental apartments. Oliphant et al. (1992) also compared the predictive abilities of ratings and choice conjoint methods using data from recreational vehicle own- ers about their preferences for a new emergency road service package to be offered by an insurance company. In both of these studies, researchers concluded that ratings and choice conjoint models performed equally well for their data sets. However, because of each study’s reliance on a single data set, they were unable to systematically vary market condi- tions to explore whether one method might perform better than others under certain conditions. This led Carroll and Green (1995, p. 388) to conclude that:choice, and latent class models lead to different market share estimates, and if so, which is better under which conditions. Vriens et al. (1996) reported a Monte Carlo simula- tion with synthetic data sets and compared nine different metric (ratings) conjoint methods using multiple compar- ison criteria including predictive accuracy. Due to the use of multiple simulated data sets, these researchers were able to vary conditions and investigate the super- iority of one method over another under different con- ditions. They concluded that differences in the predictive accuracy among the nine conjoint methods were small. However, their study only included metric methods and ignored the recently developed choice-based conjoint method (Louviere, 1988a). Thus, there is a gap in research about systematic comparison of market share predictions by ratings and choice conjoint methods under varying conditions. More importantly, little empirical evidence exists about condi- tions under which one of these methods recovers market shares better than the other. This research gap is critical because the ratings conjoint is the most widely used method by practitioners, and the choice conjoint repre- sents one of the important new trends in conjoint applications (Carroll and Green, 1995). Therefore, it is important to understand whether the two methods lead to different market share predictions under varying market conditions so that users can make prudent choices to use one method vs. another, depending on the market con- ditions that characterize a conjoint application. Thus, our goal is to compare these two methods under a variety of market conditions and identify specific conditions under which one method may outperform the other. We achieve this goal by using a Monte Carlo simulation with multiple synthetic data sets to capture different marketplace conditions. In what follows, we first briefly describe the two conjoint methods and review previous research that com- pared these two methods. Based on this review, we identify three market-related factors (consumers’ hetero- geneity in preferences, product similarity in the market- place, and consumers’ choice rule) and two model formulation-related factors (magnitude and correlation of errors) that have important effects on the relative perfor- mance of the two methods. Next, we describe the method of simulation used in this study based on the five factors mentioned above. This is followed by our discussion of the simulation results in which we compare the two conjoint methods in their abilities to predict market shares for the different populations. To preview our results, we find substantial differences in prediction accuracies of population market shares by the two conjoint methods under different combinations of the five factors. Finally, we discuss the implications of our results from both applied and theoretical perspectives.