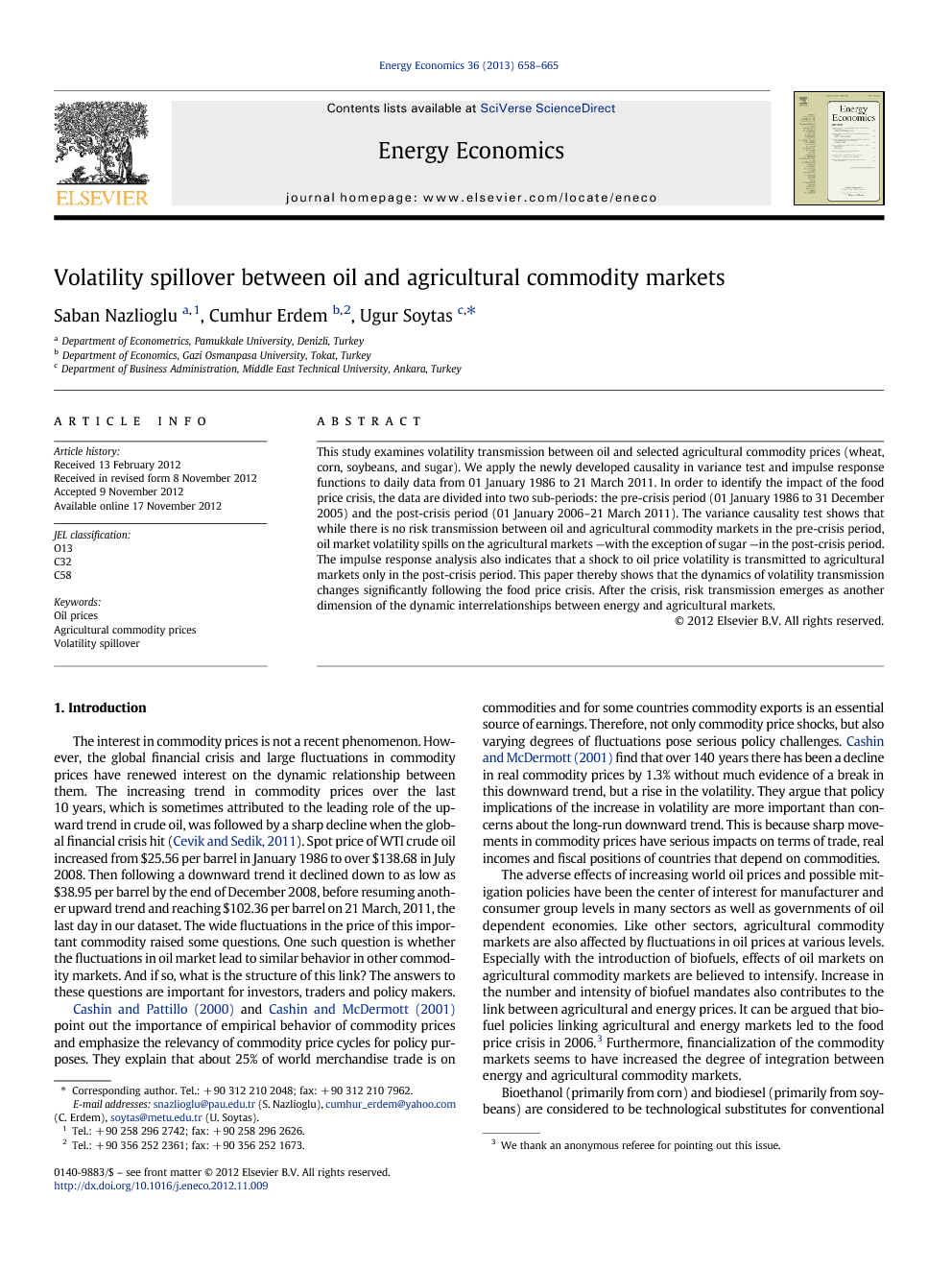 This paper investigates volatility spillover between oil and selected agricultural commodity markets (wheat, corn, soybean, and sugar) that are key agricultural products for biofuels and for food in the world. The data spanning from January 01, 1986 to March 21, 2011 are divided into two sub-periods as January 01, 1986 to December 31, 2005 and January 01, 2006 to March 21, 2011 (the post-crisis period) to account for the 2006–2008 commodity crisis. In the descriptive analysis, we observed that commodity market returns follow similar properties as financial returns. They are non-normal with excess kurtosis and skewness and the error terms show significant ARCH effects. Using a relatively new test for causality in variance by Hafner and Herwartz (2006), we find out that there is no risk transfer between any other markets before the commodity crisis; however, it is apparent that after the crisis oil market risk is transmitted to corn, wheat, and soybean markets. Moreover, we discover volatility spillover from wheat to oil market for both periods. The sugar market on the other hand seems to be neutral to oil market risks. The volatility responses of all agriculturalmarkets to risk shocks in oilmarkets seemto be significant only for the post-crisis period. These responses are not permanent and die off in about a month. Therefore, our results strongly support It is well established that oil markets have always attracted global investors. The fact that significant risk transmissions are observed from oil to agricultural commodity markets after the crisis suggests that investors seeking safe havens increase the financialization of the agricultural commodity markets. This suggests that local measures to suppress price uncertainty in agricultural markets may not be effective in the short run. The global factors such as the risk in energy markets seem to drive the short run volatility in agricultural markets. The importance of this effect is higher for countries that are most vulnerable to food price fluctuations. More light can be shed on this issue by studying the responses of local agricultural prices to global energy shocks. Furthermore, investors interested in commodity markets should realize that risk in one commodity market may not be independent of risk in other commodity markets. Further investigation is necessary in order to find out how risk transmission mechanism works between different financial and commodity markets. The dynamics of commodity prices are complicated and different factors may be affecting these markets. The recent discussion suggests that in addition to the energy-agriculture linkage, the financial factors such as exchange rates, futures markets, speculation, and interest rates may play role on the recent dynamics of commodity prices. Thereby, investigating agricultural price determination suggests the need for more empirical analysis to jointly identify the impacts of various factors on agricultural prices. In that respect, future studies can extend the literature at least in two ways. First, researches can benefit from the flexibility of structural vector autoregression models to impose theoretical restrictions to identify impacts of energy and finance markets on agricultural markets. Secondly, multivariate volatility spillover analysis which provides room to apply causality in variance tests and impulse response analysis based on multivariate models may provide new insights.